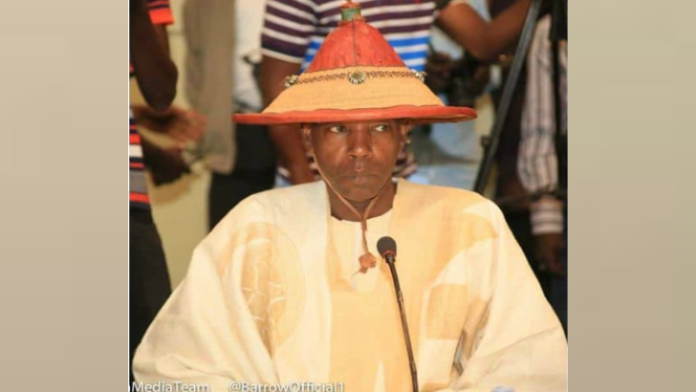 Is there a straw hat large enough for Hamat Bah to hide himself under? This Minister of Tourism and Culture has a habit of letting his mouth go on ”autopilot” trusting that some higher power will lead him right. The problem with his ”autopilot” is that it is has lost its connection with any kind of signals that could lead him. This “autopilot” that we commonly call common sense is nowhere to be found. If Hamat Bah would have been a flight captain, his plane would have crashed and burned long time ago. As it happens that Mr Bah and President Barrow are childhood friends, Mr Bah will always land on a soft spot – no matter how hard his fall is.

Don’t we have the right to expect that people who are upholding any kind of official position, and especially as high as a Minister, should be able to choose their words wisely? I read an article in this newspaper where the former presidential advisor Mai Fatty defended Hamat Bah. Mr Fatty tried to minimalize the statement made by Mr Bah. ”I don’t take it personally” mr Fatty said. ”I know Hamat Bah and he has the greatest respect for us all.” So this is how you show respect? If that is okay; then stop hitting your kids when they talk back to you from now on! Let them speak freely! Let them say whatever they want, because you know that deep within they respect you. No sir! This is not right, this is not how a Minister should behave! Hasn’t Minister Bah been found with his foot in his mouth once too many?

Minister Bah is not a young boy who can be forgiven for speaking before he considers where his words will land. Every time I see him in a photo, he looks like a grumpy old man and the world is his enemy. How can this man apply to foreign investors in the tourism area? Does he wear his silly straw hat so he might tickle some foreign investors’ imagination? Perhaps he wishes them to think that this guy really highlights his cultural inheritance. The problem with hats made of straw is that if you leave them somewhere, the rats will come at night and chew some holes in it. These holes will let the sun shine in, and with the sun comes the heat and with the heat the whole brain system shuts down. Minister Bah should be careful when he is surrounded by rats.

Two-legged ”rats” are even worse, because they can make so much larger damage than the tiny four legged ones. Minister Bah is old enough to know that the words you use can come back and bite you in the a**. Rats have sharp teeth, and they can defend themselves if you tease them enough. The Gambia is a very small country, and there is no straw hat big enough to hide Minister Bah. Words travel fast and you will be found as soon as new rats have made holes in the straw. For how long will the President be able to defend Hamat Bah?

Is the President sleeping so deeply that he is unable to wake up even from the strongest noise?

This is cut from the article in the Standard in October 20:

Fatty said Hamat “may be prone to profuse inappropriate remarks, sometimes speaks impetuously and may be inappropriately carried away by the ambiance of the moment. Under these circumstances, he may be prone to frivolous discourse. I want to believe that Minister Bah did not contemplate the perceived hubris his statement could have provoked, and I do also believe that he would have felt remorse for its unintended impact.”

Isn’t this sweet? Mai Fatty wants to believe this and that. It sounds more like he is speaking about a beloved son, than an old man who should understand better! Why on earth did Mai Fatty feel this urge to defend Hamat Bah? Doesn’t he understand that he is embarrassing himself?

Are Mai Fatty and Hamat Bah members of the same club – ”The nutty hatters”? A club for people who use cultural attributes that are taking away the focus from what they are actually saying? Why defend someone and something that is so blatantly foolish? Every Minister, every official of any kind is a representative of the people. The people are paying their salaries and have the right to expect to be met with respect. Respect is really a word that is not used in the correct way in The Gambia. Kids are supposed to respect their parents, rightfully so, but who are the parents supposed to respect? People put their noses in everyone else’s business and don’t hesitate for a moment to backstab anyone with their words. Kids have ears too, you know, they can hear what you are saying! Kids hear you and they remember what you have said and how you have said it. It is a circle of backstabbing that follows you all the way to the top of the society.

Minister Hamat Bah is not the only one who is using a foul language, but he has done it too often and has embarrassed himself in public. It seems as his way of expressing himself finally has come to haunt him. Enough is enough! Freedom of speech doesn’t give you the freedom to say everything you want any way you want. All freedoms come with responsibility, and that is something Minister Bah doesn’t seem to be aware of. Once I heard a very wise saying that has followed me for a long time now:

”When you choose your actions, you also choose the consequences.”

Consider this, Minister Bah, before you open your mouth again. Choose your words wisely because you can’t afford to embarrass yourself like this again. It doesn’t matter how many mattresses the President is laying where you are supposed to fall – the rats have chewed big holes in them and you will hit yourself.

Calling someone a rat was in Hamat Bah’s case meant to be an insult, but he doesn’t seem to know that rats are very clever creatures. They move fast, can get in through the smallest holes and they are great problem solvers. This last trait is the reason for why so many scientists are using rats in their experiments. You can teach a rat to respond on different signals; like sounds. Hearing the sound of Hamat Bah insulting people could trigger every rat around him to react in a negative way. Food for thought, Minister Bah?