Remarks on the Media Reception by H.E. Ambassador Ma Jianchun 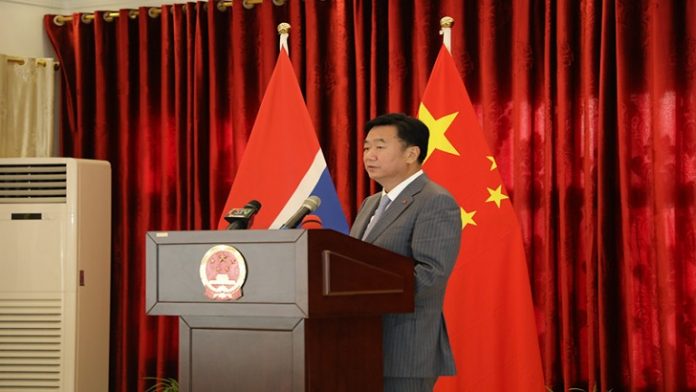 Dear friends from the media,
Ladies and gentlemen,

Good evening! It is a great pleasure to invite and meet you all here tonight. I wish to extend to you my warmest greetings and welcome.
The past month was rather busy for China, as an important annual political event, the “Two Sessions”, took place. The “Two Sessions” refers to the annual meetings of the National People’s Congress, or NPC and the National Committee of the Chinese People’s Political Consultative Conference, known as CPPCC. This year, around 3000 NPC deputies and more than 2000 CPPCC members gathered in Beijing, discussed major issues and made plans for the future of China.

Now I’d like to share with you some crucial information of this year’s “Two Sessions” and what they have to do with the world, with Africa, and more specifically, with The Gambia.
To begin with, I’d like to briefly talk about today’s Chinese economy. China has made an economic miracle over the past four decades. Today, the Chinese economy has entered a new phase of transitioning from high-speed growth to high-quality development. According to the government work report delivered by Chinese Premier Li Keqiang during the “Two Sessions”, China’s GDP growth rate was at 6.6% in 2018, with the total volume exceeding 90 trillion yuan, and the target for GDP growth in 2019 will be between 6% and 6.5%. It seems that the growth rate has slowed down. However, due to the considerable base, the actual GDP growth has exceeded the annual growth amount when China’s economy was growing at a double-digit rate more than a decade ago.

As Premier Li Keqiang confidently stated that “China’s economy will remain an anchor of stability for the global economy”, the prospect of China’s economic development remains as bright as before. China’s growth continues to demonstrate higher efficiency as the growth model is optimized, economic structure keeps upgrading, and new driving forces are gaining momentum rapidly. Meanwhile, China continues to increase its contribution to global economy and continues to be a main contributor to global poverty alleviation.
That said, what is China’s policies towards future economic development and where is China’s reform and opening-up going?
The year 2018 marked the 40th anniversary of China’s reform and opening-up, and this year’s “Two Sessions” sent out a clear message again that China will stay committed to the basic policy of reform and opening-up.

China will take on the most difficult issues in key areas of reform. Today, China is pressing ahead with supply-side reform, continuing to streamline administration, keeping on building better infrastructure, and accelerating reform related to state-owned assets and enterprises. To sustain and boost economic growth, China will lower corporate burden enormously. Premier Li Keqiang announced in the government work report that, following colossal tax and fee cuts by around 1.3 trillion yuan in 2018, China would lower corporate burdens by nearly 2 trillion yuan this year. By doing so, China makes its stance clear that it will never allow economic performance to slide out of the appropriate range, and the benefits from reform and development must be extensively shared.

China will tackle external challenges by improving its opening-up layout and make vigorous efforts to increase the level of opening-up. This year’s “Two Sessions” adopted the new Foreign Investment Law. This is of historic significance as it is a fundamental law for China’s foreign investment and innovative improvement of its foreign investment legal system. This law will promote and protect foreign investment in China by creating a stable, transparent and predictable market environment for fair competition. It means China’s opening-up is no longer limited to ensuring the free flow of production factors such as goods, capital and technology, but will focus more on the systematic aspect of opening-up, including stronger legal safeguards, better alignment with international practice and greater ease for doing business in China. To make sure the effectiveness of this law, a series of policies will be carried out. As Chinese Premier Li Keqiang said in the Bo’ao Forum for Asia Annual Conference last month, we will move quickly to formulate matching regulations for the Foreign Investment Law, further widen market access for foreign investment, open our financial sector wider, and strengthen the protection of lawful rights and interests of foreign investors.

Ladies and gentlemen,
Speaking of China’s opening-up, one might wonder what is the direction of China’s future foreign policy? To answer this question, the key is to understand Xi Jinping Thought on Diplomacy, which is profound and substantial. This year’s “Two Sessions” reaffirmed that Xi Jinping Thought on Diplomacy offered the basic principles and guideline for China’s foreign affairs in the new era.

Xi Jinping Thought on Diplomacy makes it clear that China will pursue peaceful development through win-win cooperation, uphold fairness and justice, and take the lead in the reform of the global governance system. Another very crucial point of Xi Jinping Thought on Diplomacy is that China will work to build a community with a shared future for mankind. This is not an empty slogan but a principle that guides the concrete actions of China’s diplomacy. A good example of this is China’s Belt and Road Initiative featuring the “golden rules” of extensive consultation, joint contribution and shared benefits.

The Belt and Road Initiative, also known as the BRI, refers to the Silk Road Economic Belt and the 21st Century Maritime Silk Road, and it was first proposed by Chinese President Xi Jinping in 2013. The BRI aims to be equal-footed, inclusive and beneficial to all participants. So far, a total of 124 countries and 29 international organizations have signed BRI cooperation documents with China, and a large number of BRI projects are well underway, adding momentum to the economic and social development of partner countries. As Mr. Yang Jiechi, Director of the Office of the CPC Central Commission for Foreign Affairs, pointed out in a recent interview, the BRI has opened a new area for international cooperation, boosted confidence in it, created new impetus and opportunities for global growth, and provided a new platform and new opportunities for fostering closer ties between countries. China will further push forward the Belt and Road international cooperation. The second Belt and Road Forum for International Cooperation, the BRF, will be held in Beijing two weeks later. The theme of this year’s BRF is “Belt and Road Cooperation: Shaping a Brighter Shared Future”. Representatives from over 100 countries, including about 40 leaders of foreign governments, have confirmed their attendance. Hon. Lamin B. Dibba, The Gambian Minister of Environment, will attend this event.

Ladies and gentlemen,
Another great example that fully reflects the values of building a community with a shared future for mankind is China’s cooperation with Africa. As Africa’s brother and partner, China will always attach particular importance to the needs and interests of African countries, keeping its promise of sincerity, real results, friendship and good faith. In its relations with Africa, China follows a “five-no” principle, namely, no interference in African countries’ pursuit of development paths that fit their national conditions, no interference in African countries’ internal affairs, no imposition of our will on African countries, no attachment of political strings to assistance to Africa, and no selfish political gain from the investment and financing cooperation with Africa. China-Africa cooperation has been aimed at meeting the needs of African countries, improving their capability of independent development and providing a better life for African people. At a press conference held during the “Two Sessions”, Chinese State Councilor and Foreign Minister Wang Yi pointed out that China-Africa cooperation continued to be a pace-setter for the rest of the world. Looking ahead, China will fully implement the eight major initiatives announced at last year’s FOCAC Beijing Summit and continuously deepen the BRI cooperation with African countries, including The Gambia.

Since China and The Gambia resumed diplomatic ties three years ago, the bilateral cooperation has yielded tremendous fruits over a very short period of time. The Gambia adheres to the one-China principle, and China is ready to work with The Gambia to continue steering bilateral ties in the right direction, continuously enhance political mutual trust and firmly support each other on issues of core interests and major concerns. China supports the Gambian government’s efforts in achieving the goals of national development, and is willing to enhance pragmatic cooperation and expand exchanges in all areas with The Gambia. China’s newly adopted Foreign Investment Law, as I introduced earlier, provides an opportunity to further boost the China-Gambia economic ties, and we warmly welcome The Gambia to participate in and benefit from the BRI.

Ladies and gentlemen,
The Chinese Embassy has always been a good friend with the Gambian media, and we count on the media to continue to play its role in cementing the China-Gambia bilateral relations and to connect the peoples of our two countries. The Embassy would like to keep a close relationship with you, support the development of the media in various ways within our abilities and share with you any important news release. I am sure our cooperation will further promote China-Gambia relationship and benefit our peoples.
Thank you! 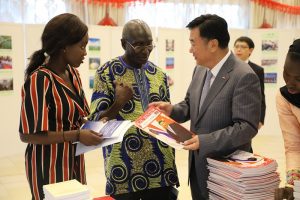 Fellow Citizens, Residents of The Gambia, It is now obvious that no one is immune to the coronavirus and its impact. The recent increase...
Read more
Speech