Salif Keita: ‘Democracy is not a good thing for Africa’ 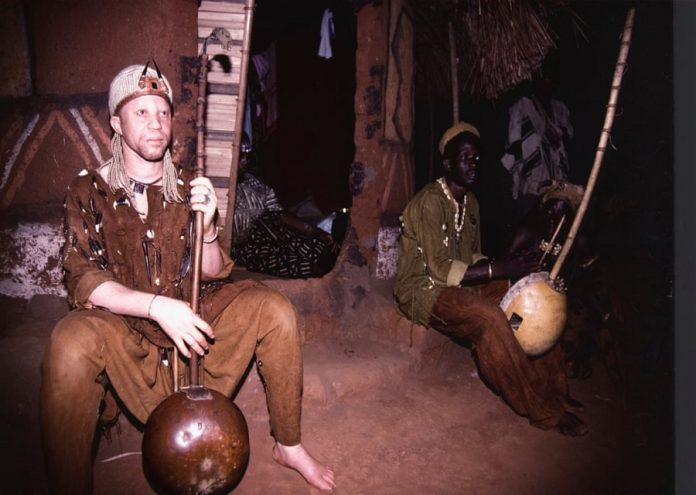 The ‘golden voice of Africa’ has just released his final album. And though he is visibly tired, he is still in love with his guitar
Salif Keita, Mali’s most famous musical son, is going home. “I’m returning to the land,” he says. “I was a farmer’s son. I am a farmer’s son. Now, I will go back to the country and cultivate.” Cultivate what? I ask, not for the first time. Keita does not answer, not for the first time. He closes his eyes and falls silent. When he does speak, it is bursts of a few words and short, stilted answers.

I am in a modest hotel suite in the north of Paris with one of the greatest musical talents the African continent has ever produced. Keita, known as the “golden voice of Africa”, has enjoyed a career spanning more than half-a-century. Now nearly 70 years old, he is known not just for his extraordinarily powerful and passionate voice, but for the genetic condition he has called albinism that has made him, he says, “white of skin and black of blood”. He has sung for Nelson Mandela, and in aid of Ethiopia. He continues to sing to highlight the desperate plight of those with albinism across Africa, giving his time and talent to raise funds.

Keita is eating breakfast, a plate of fried chicken and onions, chunks of crispy baguette and milky tea. His answers are brief and so softly-spoken it’s a struggle to catch the occasional word in between the food and the clatter of cutlery. More than once, he stops eating, looks pained, and rubs both his hands vigorously over his face.
He is in Paris to promote his 14th album Un Autre Blanc (Another White), the title a reference to his struggles as a singer-songwriter with albinism. Keita says it is definitely his last. “I will do some concerts and perhaps some tours. Nothing major and not another album.” He shakes his head. “Too much work. I am going to rest.”
Going “back to the country” means returning to the village of Djoliba, 23 miles south of the Malian capital Bamako, which takes its name from the local Mandingue language for the river Niger on whose banks it sits. Keita grew up here, during the last years of French colonial rule – Mali became independent in 1960 – as one of 10 children in a family directly descended from the warrior king Sundiata Keita, the 13th-century founder of the Mali empire. They were aristocratic, but dirt poor.

The musician has said his father was shocked but not entirely surprised when he was born with albinism, a condition caused by the absence of melanin pigmentation in the skin. There had been others with the condition on his mother’s side of the family. “It is a problem in places where cousins marry, a problem of culture,” he explains.
As a child, Keita’s family kept him out of the fields, where working under the fierce sun was out of the question, but they were unable to protect him once he started school. “There were 500 students and I was the only white. Of course, I realised I was different and they didn’t let me forget it. I was bullied. Physically. It was not easy. I learned quickly how to defend myself.”

He adds: “I was a good student. My dream was to be a teacher, but in those days you had to ask the government to find you a post. After I finished my studies, the doctor [at the training school] told me I couldn’t be a teacher because I would scare the children. They also said it was because of my eyes … but I had special glasses and could see perfectly well.

“I didn’t want to be a musician. I am from a family of nobles. In Mali, nobles don’t make music – that’s for the griots,” he continues, referring to West African troubadour storytellers. “But I had no choice. I could be a musician or I could be a delinquent, a criminal, a thief, a bandit.”
I am curious as to why these were the only options. “I am an albino. What else could I do? There was nothing else. My family didn’t want me to be a musician. They tried to stop me. So I left,” he says.

Keita went to Bamako, and began singing in cafés and restaurants. He taught himself to play guitar, first joining the Rail Band, entertaining guests in the hotel restaurant at the railway station, then the Ambassadors, who were based at a hotel with an international clientele.
“I decided to learn the guitar and do some music. It was just something to do while waiting to find another job. I didn’t think I would be a professional musician but in the end I never had another career. It was a surprise to be so successful.” Success also brought reconciliation with his family. “Later, when they saw that I was famous, they accepted it more.”

In the 1980s, Keita moved to Paris where he released his first album Soro, and in 1988 he was invited to join the anti-apartheid Nelson Mandela 70th birthday tribute at Wembley stadium, an event relayed to 67 countries with an audience of 600 million. London does not appear to have made a huge impression on the singer, then or since. “It’s always raining.”
As he travelled, he picked up different musical influences including Cuban salsa and European bands like Led Zeppelin and Pink Floyd, taking “bits and pieces here and there” and creating the afro-pop sound he is credited with founding. “But I never wanted to go far from my traditions. There is a melody, a heart, to Malian music that’s almost oriental,” he says.

He becomes more animated when asked whether he will use his retirement to become more involved in politics. Mali, one of the world’s poorest nations, has been in turmoil since Tuareg rebels and loosely allied Islamists took over its north in 2012 and sparked the overthrow of the president. French forces intervened to push them back the following year but Islamists have since regained a foothold in the north and centre, exploiting ethnic rivalries to recruit new members.

“It’s hard to be a good person when you are corrupt, and our politicians are always corrupt,” Keita says. “Mali is the most corrupt country in the world after Cameroon.
“Democracy is not a good thing for Africa. We were all happy to see democracy come to Africa, but it destroyed the human sensibility. To have a democracy, people have to understand democracy, and how can people understand when 85% of the people in the country cannot read or write? They need a benevolent dictator like China has; someone who loves his country and acts for his country.”

Close to his heart is an ongoing campaign to raise awareness of albinism and help sufferers. Across the continent, folklore and superstitions mean sufferers are shunned or worse, beaten, killed and dismembered for their body parts credited with magical powers.
Last November, Keita organised a benefit concert to raise awareness of the problem after a five-year-old girl with albinism, Ramata Diarra, was ritually killed and beheaded in the town of Fama, 80 miles west of Bamako. “Never again,” he said at the event. “I have the strong hope that people will understand that we are born in the same way and we have the same rights as everyone else.”
He now oversees two foundations – Salif Keita Mali and the Salif Keita Global Foundation, based in the US – to continue this campaign. As well as combating prejudice, it offers practical help for sufferers, distributing sun creams to lessen the risk of skin cancers, and spectacles.

“We have to speak out. People with albinism are killed because of old beliefs that say their limbs have powers. This kind of belief is not finished in Africa,” Keita says. “It is true that people who are different are badly treated all around the world. It is different for me now – people hardly notice I am an albino. If you are famous, you pass unnoticed. But this work is a duty, a duty to give something back. If I am popular, I must serve others and this is how I do it. What I am saying is that the colour of your skin is not a handicap … and it’s not very important either.”

It is the most he has said in one go in the last hour, but now our time is up. Keita has a busy schedule of interviews before he returns to Africa with his “wife”. I am about to ask when he nods to two black guitar cases propped against the wall.
“My guitar is my wife. A good wife. If I leave her there she is still there and still the same when I come back to her. We will always be together … but now I’m going back for a rest.”

Share
Facebook
Twitter
Pinterest
WhatsApp
Previous articleDear Mawdo:The truth! What truth? Which truth? Whose truth?
Next articleOusainu Darboe of UDP, the politician Full disclaimer: No attempt will be made here to examine Mr Darboe as a man and a professional – lawyer. I am no ANM Ousainu Darboe hater.
Join The Conversation