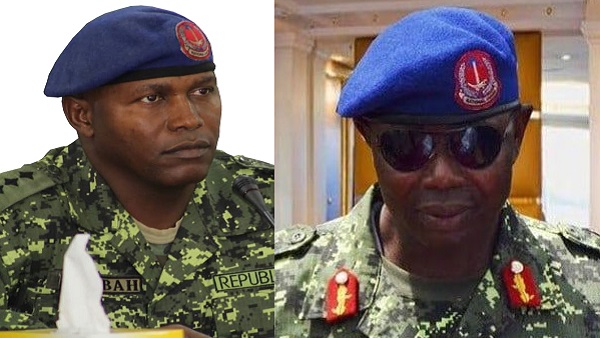 Captain Bubacarr Bah, a senior officer in the Gambia National Army has claimed before the Truth, Reconciliation and Reparations Commission that the exiled former General Sulayman Badjie has ordered him to plant explosives during the 2016 political impasse.
Testifying before the commission, Bah, a trained expert on explosive weapons, recalled that during the impasse, General Badjie told him that the Coalition and others have connived with the IEC to rig the election and that they are expecting foreign forces to invade the country . Bah said among the places Saul Badjie identified where they should create a fighting zone included places such as Petroleum House and GNPC stations.
The witness said he had all the opportunities to comply with the order but he refused in defence of the citizens who have already decided who should govern them.

Captain Bah earlier also apologized to former minister Omar Jallow, who accused him of injuring his eye, and other detainees for participating in their torture during the regime of the former junta government when they were arrested and detained at the Fajara barracks.
He claimed that his own immaturity at the time coupled with the information he heard about OJ trying to connive with mercenaries to wage war on the country, blinded him to participate in the torture of OJ .

“I regretted why I acted on the information given to me at the time without verifying it. I regret when I see OJ’s story in the papers and I felt guilty whenever I see OJ. I have offended him and all the Gambians whom I am supposed to protect; so I ask for their forgiveness,” a remorseful Captain Bah appealed.
Bah told the Commission that he is a specialist in ammunition, mines and explosives.
He said at the time of the 1994 coup, he was working with the Turkish Training Team, noting that on the morning of the coup, he saw officers of the Army and some Gendarmerie officers running in different directions who told him that there was a mutiny and that the Fajara barracks could be attacked by the mutineers.

He further claimed that he and some soldiers were arrested by Sana Sabally and Sadibou Haidara as a well as some soldiers and taken to the Yundum barracks where they were detained for some days.
He said he was later released and he reported to duty at the Gambia Army Training School as an instructor.

Captain Bah recalled that he was the training instructor at Fajara Training School when the 11 November 1994 incident happened.
He alleged that at this time, the AFPRC had brought in weapons including a modified AK 47, PKMS and others from Ukraine.

He clarified that 11 November 1994 should have been a day of graduation for the soldiers who did the training of trainers and the use of the newly smuggled weapons but unfortunately on the early morning of the day, the barrack was attacked by unknown people who fired from different locations.
He confirmed being part of some soldiers who fired at the attackers but later he got information that the attackers were the Council members and their soldiers.
Sittings continue today.