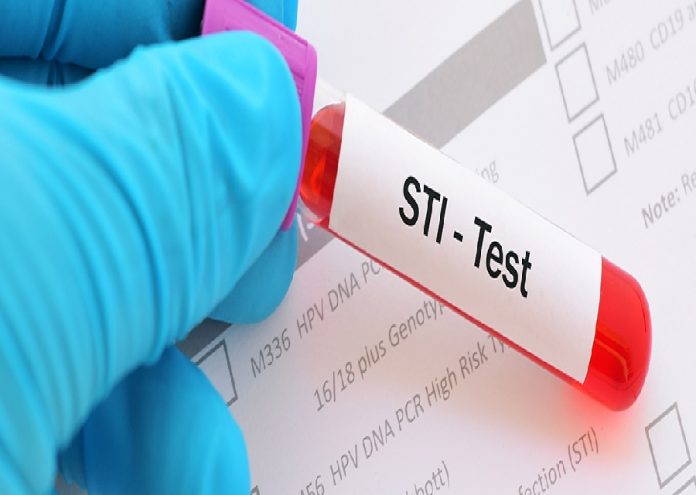 Sexually transmitted infections (STIs), also referred to as sexually transmitted diseases (STDs), are infections that are commonly spread by sexual activity, especially vaginal intercourse, anal sex and oral sex. Many times STIs initially do not cause symptoms. This results in a greater risk of passing the disease on to others. Symptoms and signs of disease may include vaginal discharge, penile discharge, ulcers on or around the genitals, and pelvic pain. STIs can be transmitted to an infant before or during childbirth and may result in poor outcomes for the baby. Some STIs may cause problems with the ability to get pregnant.

Prevalence
In 2008, it was estimated that 500 million people were infected with either syphilis, gonorrhea, chlamydia or trichomoniasis. At least an additional 530 million people have genital herpes and 290 million women have human papillomavirus.
STIs other than HIV resulted in 142,000 deaths in 2013. In the United States there were 19 million new cases of sexually transmitted infections in 2010.

Main types
Chlamydia: Chlamydia is a bacterial infection of your genital tract. Chlamydia may be difficult to detect because early-stage infections often cause few or no signs and symptoms. When they do occur, symptoms usually start one to three weeks after you’ve been exposed to chlamydia and may be mild and pass quickly. Symptoms includes:
· Abnormal vaginal discharge in women
· Burning during urination,
· Bleeding in between periods.
· Pain when urinating,
· Abnormal discharge from their penis.
· Lower abdominal pain
If left untreated in both men and women, Chlamydia can infect the urinary tract and potentially lead to pelvic inflammatory disease (PID) which has the potential to cause infertility.

Gonorrhea is a bacterial infection of your genital tract. The bacteria can also grow in your mouth, throat, eyes and anus. The first gonorrhea symptoms generally appear within 10 days after exposure. Signs and symptoms includes:
· Thick, cloudy or bloody discharge from the penis or vagina
· Pain or burning sensation when urinating
· Heavy menstrual bleeding or bleeding between periods
· Painful, swollen testicles
· Painful bowel movements
· Anal itching
Trichomoniasis is a common STI caused by a microscopic, one-celled parasite called Trichomonas vaginalis. This organism spreads during sexual intercourse with someone who already has the infection. Trichomonias is typically infects the vagina in women. When trichomonias is causes symptoms, they may appear within five to 28 days of exposure and range from mild irritation to severe inflammation. The organism usually infects the urinary tract in men, but often causes no symptoms. Signs and symptoms may include:
· Clear, white, greenish or yellowish vaginal discharge
· Discharge from the penis
· Strong vaginal odor
· Vaginal itching or irritation
· Itching or irritation inside the penis
· Pain during sexual intercourse
· Painful urination
HIV is an infection with the human immunodeficiency virus. HIV interferes with your body’s ability to fight off viruses, bacteria and fungi that cause illness, and it can lead to AIDS, a chronic, life-threatening disease.
When first infected with HIV, you may have no symptoms. Some people develop a flu-like illness, usually two to six weeks after being infected. Still, the only way you know if you have HIV is to be tested.

Early signs and symptoms
Early HIV signs and symptoms usually disappear within a week to a month and are often mistaken for those of another viral infection. Early-stage HIV symptoms may include:
· Fever
· Headache
· Sore throat
· Swollen lymph glands
· Rash
· Fatigue
As the virus continues to multiply and destroy immune cells, you may develop mild infections or chronic signs and symptoms such as:

Late-stage HIV infection
Signs and symptoms of late-stage HIV infection include:
· Persistent, unexplained fatigue
· Soaking night sweats
· Shaking chills or fever higher than 100.4 F (38 C) for several weeks
· Swelling of lymph nodes for more than three months
· Chronic diarrhea
· Unusual, opportunistic infections
Genital herpesis a highly contagious STI caused by a type of the herpes simplex virus (HSV) that enters your body through small breaks in your skin or mucous membranes. Most people with HSV never know they have it, because they have no signs or symptoms or the signs and symptoms are so mild they go unnoticed.
When present, genital herpes signs and symptoms may include:
· Small red bumps, blisters (vesicles) or open sores (ulcers) in the genital and anal areas and areas nearby
· Pain or itching around the genital area, buttocks and inner thighs.
Human papilloma virus (HPV) infection is one of the most common types of STIs. Some forms of HPV put women at high risk of cervical cancer. Other forms cause genital warts. HPV usually has no signs or symptoms. The signs and symptoms of genital warts include:
· Small, flesh-colored or gray swellings in your genital area
· Several warts close together that take on a cauliflower shape
· Itching or discomfort in your genital area
· Bleeding with intercourse

Prevention
· The most effective way to prevent sexual transmission of STIs is to avoid contact of body parts or fluids which can lead to transfer with an infected partner
· Both partners can get tested for STIs before initiating sexual contact, or before resuming contact if a partner engaged in contact with someone else
· Proper use of condoms reduces contact and risk. Although a condom is effective in limiting exposure, some disease transmission may occur even with a condom.
· Consider that not having sex is the only sure way to prevent STDs
· Get a vaccination for hepatitis B: vaccines are safe, effective, and recommended ways to prevent hepatitis B HPV
· Always avoid sex with anyone who has genital sores, a rash, discharge or other symptoms.