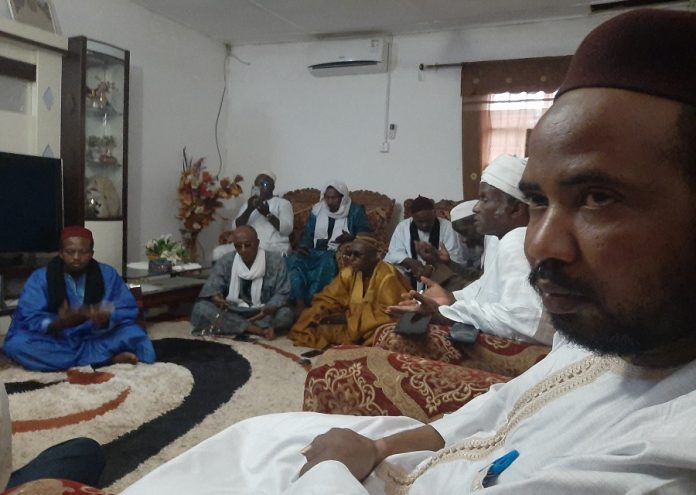 Angry members of the Sheriff community in The Gambia on Friday lifted a one-million-dalasi bounty on one Musa Saidy, a preacher living in Tujereng Village after he bowed before them to apologise at a meeting called to bring peace between him and the Sheriffs.
Saidy, known for his overzealous preaching, has recorded an audio attacking the community of Sheriffs, some of whom have pledged one million dalasis to anyone who can kill him.

Alhaiba Hydara, the Imam of Banjul Airport who is the spokesperson of the Imams said: “What Musa Saidy did is not about religious preaching but an attack against a tribe that really hurts because it renders the Sheriffs as illegitimates because even though the Meccans didn’t like Prophet Muhammad, but they never said he is not from the Quaraysh. We are definitely angry and some of us were ready to go to the extreme.”

“We have never touched any tribe and we don’t want anyone to say anything bad against us which he/she cannot justify. I want to urge preachers to concentrate on what God said and avoid making tribal statements that could create uncertainty in the country,” he added.
He said they were planning to take serious actions against Mr Saidy as they have already reported the issue to the Inspector General of Police and the Brusubi police.

After stating their case against Musa Saidy, the Sheriffs then reported that they however accepted a plea from the deputy governorof West Coast Region, Musa Suso who called the meeting so that Mr Saidy could apologise for his insults against the Sheriffs.
Suso said though government welcomes openness and free expression, it will not however condone any comments or expressions that will bring instability.

“I have listened to the audio released by Musa Saidy and I have also followed the reactions of the Sheriff community around the world and it is really scary and I believe if we had not intervened at the right time, things would have gone out of hand. Some Sheriffs have gone to the extent of making a pledge of one million dalasi for anyone who can kill Mr Saidy and some of their followers have vowed to kill him,” Suso said.
He urged Mr Saidy to personally buy colanuts and apologise to the Sheriff community and avoid making such mistakes in the future.

Mr Suso also urged the Sheriff leaders to communicate to their community about the apologies of Mr Saidy to ensure that the issue doesn’t escalate.
He promised to call all the chiefs in Kombo for an emergency meeting on Thursday to discuss Mr Saidy’s issue.
The Alkalo of Tujereng, Karamo Bojang warned Musa Saidy that “if he repeats such comments he would be dealt with.”

Lamin Darboe, the Chief of Kombo South expressed disappointment over the comments made by Mr Saidy and warned they will henceforth monitor him and “whenever he is caught saying things that could bring instability in this country, actions will be taken against him.”

The Imam of Tujereng, Sheriffo Jatta said he receives lots of complaints about Mr Saidy directly attacking people and he warned the preacher to focus on what Allah said and stop attacking people.

Apology
Musa Saidy, who is at the centre of the issue accepted making a big mistake and rendered his unreserved apology to the Sheriff community.
“I would not say much. All I want to say is that I was wrong and I apologise. It was the work of the devil. I am just human. I am not immune to making errors but it will not happen again,” he said.
Yusupha Saidy, a brother to Musa Saidy, extended the family’s heartfelt apology to the Sheriff community.