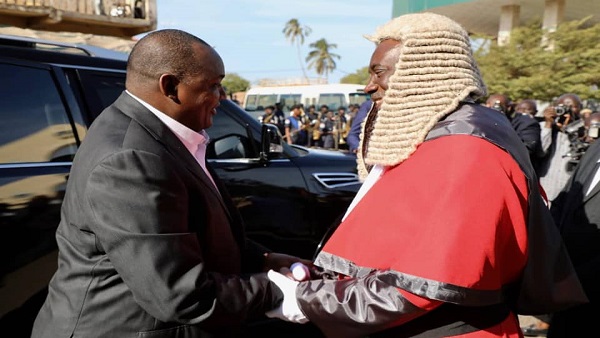 Two years ago, we set out to restore public confidence in our administration of justice system which was perhaps at its lowest ebb following two decades of calculated interference in our judiciary and a systematic dismantling of the machinery of justice by the previous administration. Today, we are proud to say that we have in large measure achieved this objective even though we also recognize that there is still room for improvement.

Over the past two years, and in spite of the enormous human and material resource challenges, we have registered some modest progress in governance and particularly in our efforts to rebuild a strong, indigenized and independent judiciary. In the process, we have also empowered women by appointing them to decision-making positions. This is reflected in the judicial appointments made following the installation of the new Government. Out of 12 new judicial appointments to the Superior Courts, 5 of the judges are women including the first female Gambian Justice of the Supreme Court, Justice Mam Yassin Sey. 4 out of the 7 Justices of Appeal are now women including the President of the Court, Justice Awa Bah. And for the first time in the history of The Gambia, we now have a fully constituted exclusively Gambian permanent Supreme Court Bench.

We have also established within my Ministry, a Sexual and Gender Based Violence Unit that will now be responsible for handling all criminal cases of sexual violence and abuse. Members of the Unit will receive specialized training in the investigation and prosecution of sexual violence crimes against women and children. Moreover, we have re-instituted professional discipline at the Ministry so that all legal matters are now handled in accordance with the law and the dictates of the legal profession.

In the course of this year 2019, we have identified key priority areas of focus and have already initiated steps to get the activities underway. We will be conducting a comprehensive review of the Criminal Code and the Criminal Procedure Code as part of the sanitization of our criminal justice system. This review exercise will commence soon as the process for the recruitment of local consultants have already been initiated. I take this opportunity to extend gratitude to the Korean International Cooperation Agency who are graciously funding this review exercise through the UNODC and I also thank the latter for their partnership in this process.

Also, in collaboration with Article 19 and the Ministry of Information and Communication Infrastructure, we have commenced the review of all media laws to ensure consistency with our constitutional obligations and to facilitate the exercise of the right to freedom of expression. In fact, this review exercise should have been completed in large part by the end of last year but due to a confluence of factors we could not achieve our target. We hope to make substantial progress in the course of this year. Notwithstanding the absence of appropriate legislation for the time being, the Government has demonstrated good faith in this regard by allowing the proliferation of private newspapers and radio stations that encourage the free flow of ideas among the citizenry in the country without fear or repercussions. Indeed, The Gambia has significantly improved its ranking in the 2018 annual press freedom index scoring 122 out of 180 countries compared to 145 in 2016 and 143 in 2017.

We are also at the final stages of reviewing an Anti-Corruption legislation to replace the Anti-Corruption Act of 2012 which was heavily watered down by the previous administration. While there is genuine concern about corruption in the country, the 2018 Corruption Perception Index by Transparency International has recognized The Gambia’s improved score over last year’s based on political commitment, laws, and institutions. As a result of ongoing efforts at tackling corruption, there has been a marked improvement in financial governance with rigorous enforcement of the Financial Regulations by Government departments. Notwithstanding, the perception of widespread corruption must always be of concern as it does little to encourage investment in the local economy among other undesirable consequences. But more importantly, corruption kills. Every Dalasi taken from State coffers is food taken away from the mouths of hungry children, or medicine taken away from the sick, dying of preventable or curable diseases. All the more reason we should expose it whenever it occurs and continue to fight it in all its forms so that it does not take root or become pervasive.

We will also engage in reform of the electoral process in consultation with key government stakeholders, the Independent Electoral Commission, and all registered political parties in the country. We of course recognize that the ongoing constitutional review process will likely address fundamental aspects of the electoral process and we will keep an eye on that parallel process as we embark on ours.
Far reaching reforms of our prisons system has already commenced with internal review of the Prisons Act led by the Ministry of Interior. However, that is just one aspect of our reform objective. We want to overhaul our entire prisons system and transform our prisons so that they do not only serve as a decent place of detention for our fellow humans, but also for the rehabilitation of prisoners in preparation for their re-integration into society at the end of their prison terms.