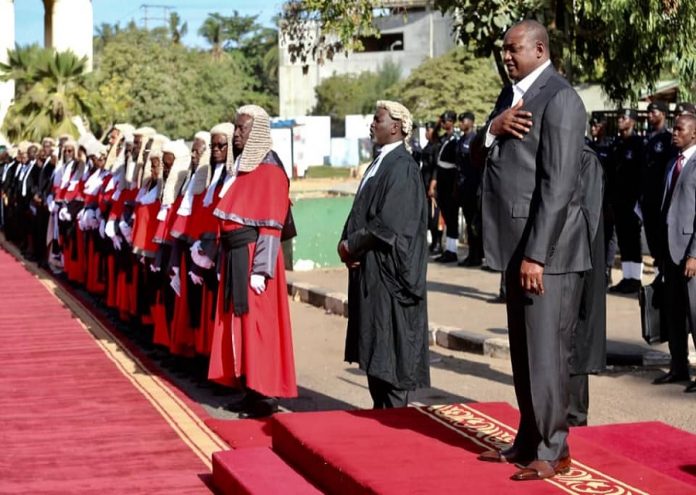 Good Morning
It is indeed my delight and honour to appear before the members of the legal fraternity on this very auspicious occasion dedicated to the legal year.
As this is my first official engagement with members of the legal profession since I assumed office just over two years ago, I want to seize this opportunity to pay tribute to the gallant men and women of The Gambia’s legal profession for their principled and patriotic stance following the attempt to subvert the will of the sovereign people of The Gambia in 2016. You have left your mark in the history of the country by showing exceptional character and leadership against the dictatorship in The Gambia after the 2016 elections.
My presence and other members of the Executive arm of Government at this occasion is a testimony of my Government’s strong commitment to the rule of law, judicial independence and the fundamental human rights of all citizens.

Distinguished Ladies and Gentlemen,
After assuming office, my Government undertook a number of measures to stabilize the economy, restore public confidence and strengthen democratic institutions. Accordingly, the first strategic priority of the National Development Plan (2018-2021) is “restoring good governance, respect for human rights, the rule of law and empowering citizens through decentralization and local governance.” In this light, we have taken a number of strides in fulfillment of this development aspiration.

After many years of judicial mal-administration, we sought to sanitise the judicial administration and ensure judicial independence in the country with the appointment of our distinguished current Chief Justice. This was followed by the re-constitution of the Supreme Court after a three-year break. In 2017, we ‘Gambianised’ the Judiciary with the appointment or reinstatement of twelve Superior Court Judges.

As opposed to the intolerable practice of sacking Judicial officers without any just cause, as witnessed in the past, no judicial officer has been arbitrarily dismissed from office since I assumed office. On this auspicious occasion, I once again pledge my firm commitment not to interfere in the judicial administration of the country.
To guarantee judicial independence, the 1997 Constitution of The Gambia provides for the financial autonomy of the Judiciary by providing for the direct presentation of the Judiciary’s budget to the National Assembly, rather than through the Ministry of Finance. For the first time since the 1997 Constitution came into force, this Constitutional provision was given effect this year, 2019, after I gave approval to the request by the Hon. Chief Justice.

My Government is also committed to attracting the very best legal brains to our judiciary. It goes without saying that this can only be achieved by offering better conditions of service for judicial officers. Accordingly, effective January 2019, we have approved an improved payment package for judicial officials.
In this regard, let me use this opportunity to express my heartfelt condolences to the entire legal fraternity and the family of the late Justice Buba Jawo of the High Court of The Gambia on his demise in December 2018. May his soul rest in perfect peace.
Ladies and gentlemen, in line with the commitment of my Government to build a strong foundation for good governance and more efficient checks and balances, we have instituted a Constitutional Review Commission exclusively comprising distinguished Gambians to draft a new Constitution that will usher in the third Republic of The Gambia.

As a country we have to systematically deal with the past human rights abuses meted out to innocent Gambians over the last two decades of authoritarian rule. Thus, we have put in place a transitional justice mechanism that seeks to document the truth about the human rights abuses and make certain that we never again undergo such ugly episodes in our beloved country. The Truth, Reconciliation and Reparations Commission, which has already commenced work, will provide an opportunity for both victims and perpetrators of human rights abuses to explain their stories in order to establish the truth, promote reconciliation and ensure that justice is served in appropriate cases recommended by the Commission.
As part of the efforts to change the human rights architecture of this country, the National Assembly enacted the National Human Rights Commission Act in December, 2017. A rigorous and competitive selection process was instituted thereafter to select the five Commissioners for the first ever National Human Rights Commission for The Gambia.

I am happy to announce that, recently, I endorsed the appointment of these five Commissioners. Once the Commission starts effective operations, I expect that no Gambian in any part of The Gambia will suffer any human right abuse without redress. It is equally expected that this Commission will provide a reliable alternative for ordinary Gambians who have found the court system both expensive and cumbersome.
The Government has instituted a criminal Justice and Prisons legislative reform project to repeal the laws which were used as instruments of repression against Gambians. The goal for this decision is to attain a just society. The process involves a review and redrafting of the criminal code, the Criminal Procedure Code and the Prisons Act for the first time since attaining Independence in 1965, in order to align them with international norms and best practices.

My Lord, the Chief Justice and members of The Gambia Bar, I appreciate the collective efforts to improve our judicial and legal system. However, much remains to be done to attain the collective aspiration of our people.
Court cases still move at less than an ideal pace; legal fees are still very high for the average citizen, and many Gambians still have to travel long distances to access courts outside the Greater Banjul Area.

These challenges and many more will have to be overcome by the joint efforts of the Executive, the Judiciary and the legal fraternity. Together, we can overcome them.
To conclude, I congratulate all members of the legal profession on the achievements realised so far. It is now an honour to declare the Legal Year 2019 open and I wish you a successful legal year.