Sutukoba, the karate village in The Gambia 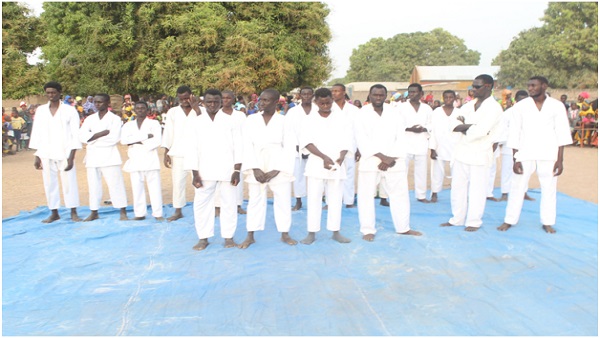 Karate is unarguably the oldest, most popular and respected martial art in The Gambia.
Apart from the obvious development of self-defense skills, enthusiasts are of the conviction that the practice builds confidence, self-discipline and of course fitness.
For many, karate gives children a solid foundation to cope with the pressures each endure throughout childhood, setting the behaviors for a successful transition to adulthood.
In Gambia, the National Karate Federation continues to thrive in shining the country’s name on the sports global ranking, but one aspect it fails to do enough in is decentralizing its activities to avail karate lovers in the rural parts of the country a chance to practise an art they are dearly in love with.

Karate champion, Saikou Yaffa, is changing the narrative. He hailed from Sutukoba, a remote village in Upper River Region, over 350 kilometers away from the capital, Banjul.
As many of his mates in the village, Saikou went to the Greater Banjul Area to search for job opportunities. This gave him the chance to train karate – a passion he has been nursing since childhood.
He dedicated time, energy and resources in pursuing this dream and it led to his victory in a national karate championship in 2016.

In celebrating this victory, he recognized that by virtue of distance, many young people living in his village could also be karate champions only if they have a chance to be trained.
The black-belt holder now established a karate club in Sutukoba, giving the young people a first step towards an exciting and enriching karate journey.
The Sutukoba Karate Club, established in August 21st, has a membership of 61 including few children under 10. This number excludes the tens of children who can be seen daily practising karate on every street in the village while going about their everyday lives. Almost every child living in the community is a karate star!
The club provides a structured life-enhancing after-school program that not only let people practise their beloved art but also teaches them valuable life lessons that enable them to live safe and sound.

“My students develop positive characters and learn powerful self-defense techniques which help them to become physically fit.? Our overarching goal is in building our students’ self-esteem and making them better people in the society,” master Saikou noted.
His students join a club that works together towards improving physical strength, better focus and most importantly, increasing self-confidence. These attributes are visibly manifested everywhere in the village.
Even parental testimonies have it that after only a short time, their children’s focus, discipline, self-esteem, and in many cases even their grades increase!
Master Saikou added: “I arm them with courage and develop their character as I prepare them as leaders in their future endeavors.”

Karate is not really for fighting but a sports activity, he said, adding that he is trying to help young ones to be good and responsible natives.
He urged the youth to take up the sports, saying karate is meant to inculcate in people discipline, give them good health and serve as source of self-defence.
The karate club holds an annual karate competition as part of the village’s cultural festival which provides over seven thousand spectators for his boys to exhibit their martial arts skills in public.

On dusty Friday morning – the eve of the competition day -, Saikou convened a final rehearsal session for his students and gave them his final words before the gala.
Session, held at one of the village primary school’s classrooms, was filled with time-tested drills, sparring, kicks, punches and blocks. They demonstrated the ability to carry out instructions timeously and to perfection.
This, Saikou said, makes children “sharper” and increases their ability to make quick and correct decisions.

Waiting for the next command from their master, the students fold their hands and had all eyes on the master who stood in front of the class.
“As tomorrow marks your big day, I urge you all to remember the tactics I trained you and always remember the rules. You have to fight to the end because we will be awarding the champion with a certificate and a big surprise,” he told students sitting on the floor in a classroom surrounded by onlookers who came to grasp a glimpse of what awaits them on Saturday.

At the end, Master Saikou reminded his students not to use any karate move on their family members or friends unless in unavoidable circumstances.
During their combats on Saturday evening – 16th February, 2019 -, their parents were seated on the front rows and they showed an undivided concentration on every fight. Every good punch was greeted with rousing claps and praise songs.
Solitarily operating a karate club in the village without a sponsor will certainly come with challenges. The white uniform they are using came out of students’ monthly contribution. In fact, not all of them own one – only those whose parents can afford it.
“Our challenges are numerous. We lack karate equipment, safety gears and special hall for training and practical. We train in school classrooms and the condition there is not favorable at all,” Saikou decried.

18 year-old Sarjo Yaffa is one of Saikou’s dedicated students. He has been praised for being a determined go-getter.
Although his wish to win the village karate championship did not materialized, he put up a captivating combat.
“I love karate since I was a child. I grew up watching Chinese movies and that inspires me a lot. Without the Sutukoba Karate Club, this dream would have been shattered away,” Sarjo said, while expressing gratitude to his master, Saikou.

He echoed the challenges Saikou stated, adding that they are unable to participate in national karate championships due to inadequate fund to transport the team to the urban part of the country, where all national competitions take place.
The head of the village, Kumuntung Jabai, hailed Saikou for the initiative, describing him as an ‘industrious’ son of the land.
“The karate club presents a learning opportunity for young people – most of whom sluggish around town during dry season,” he added.
Kumuntung pledged that he will apportion an empty land to the club if it is ready to build a karate hall.

He was one of the many spectators meticulously watching the competition from the pavilion.
“I am pretty delighted to see that they have trained this far. Their skills will not only be useful for self-defense but by extension, defending the village from external attacks,” he noted.
Everyone has different reasons to love martial arts and for Saikou, whether your goals are to learn self-defense, watch actions from the stance or to begin a hobby that promotes a healthy lifestyle, the bottom-line remains that karate has something for everyone.

Saikou is the Publisher and Editor-In-Chief of The Stone Circle (www.thestonecirle.gm). He is a freelance correspondent for the BBC World Service and Spanish News Agency. 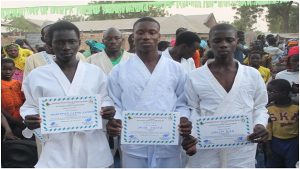