The adventures of Alkatan Part 3 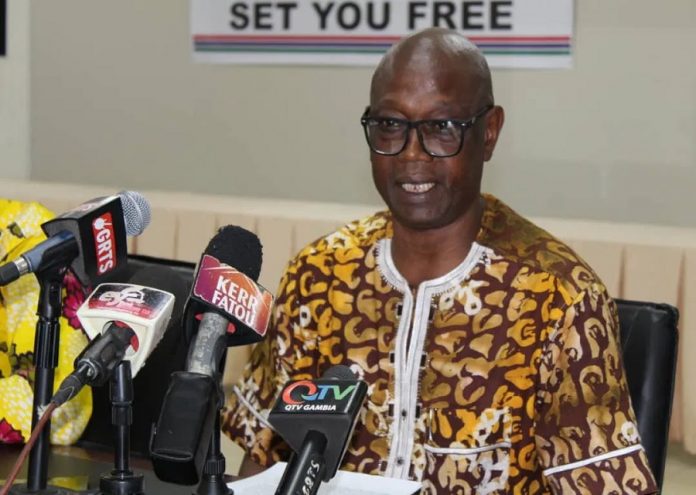 When Alkatan and the man arrived at the Alkalo’s compound, Kiyanka was seated in the royal chair under the mango tree in front of his house. He seemed to be having a meeting with the village council since several people were seated on mats on either side of the Alkalo. Some of them recognized Alkatan and said “Oh Alkalo, you have a big guest, it’s Alkatan!” Kiyanka sat up in his chair and exchanged greetings with the two men, and invited them to please sit down on a vacant mat.

“And what brings you here Nyaka?” Kiyanka said, addressing Alkatan’s companion. “And who is this old man with whom you come?”

“Yes Alkali,” Alkatan added. “You should return this man’s goat to him. He needs it more than you do.” The Alkalo was taken aback by the old man’s forthright tone.

“But who are you to tell me that, old man?” Kiyanka retorted. “But first who are you? What is your business in Tonya Kunda, because you certainly are not Alkatan. First of all, tell me who you are and then we will talk about Nyaka’s goat.” Nyaka and others around who knew Alkatan assured Kiyanka that the old man was indeed Alkatan. But Kiyanka insisted that he was not Alkatan.

“Are you all blind or are your heads turned? I say this is not Alkatan and you are telling me it is Alkatan? Do I not know Alkatan? Was I not the one who welcomed him right here where we are seated when he first came to Tonya Kunda? Was I not the one who allowed him to stay and even showed him a place to build his hut? Just last week I saw Alkatan at Domori’s naming ceremony and you are telling me this is Alkatan?”

“Alkali,” Alkatan said. “It really does not matter who I am. What matters is what we are here for. And that is that you should return this man’s goat to him.”

“And who are you to ask me to return Nyaka’s goat to him?” Kiyanka fired back, getting agitated. “I own this village and whoever lives here must give me a goat every year. That is my law which I have made to stand. Why should Nyaka not give a goat when everybody else has?”

“Because Nyaka has only one goat and his baby daughter depends on that goat’s milk,” Alkatan firmly responded. “Nyaka’s wife is sick and her breasts have no milk, and they feed their baby with that goat’s milk. As we talk the baby is crying of hunger. So you should just give him back his goat so that the baby gets some milk and there will be peace,” Alkatan said.

“Wow!” Kiyanka exclaimed, holding his mouth and glancing around at the councilors. “Do you think this old man is healthy? He comes here from I know not where and he is telling me to give Nyaka’s goat back! He is not even begging me. He’s saying that I must return Nyaka’s goat! Old man, if you want peace, get up and leave my compound right now! And I don’t want to see you in Tonya Kunda again,” Kiyanka sternly said, pointing his finger at the compound gate. “And you Nyaka, if you enter my compound again you will leave Tonya Kunda with your family!”

“Yes we will leave your compound Alkali,” Alkatan responded, looking Kiyanka straight in the eyes. “But before we go I want to ask you a question. I heard that you have about 600 cows and hundreds of sheep and goats? Is that true alkali?”

“Six hundred cows? Three thousand cows is what I have!” Kiyanka retorted, sitting up straight in his chair and staring down at Alkatan. “Each of my three herds here in Tonya Kunda has over 300 cows. Then I have a thousand cows in Nyomara Kunda and another thousand cows in Nyabiti Kunda, my uncle’s village. My uncle is the chief of this district. The number of cows he has cannot be counted. But what have my cows to do with Nyaka’s goat? Tell me that.”

“So you are saying that Nyaka should not pay his taxes?” Kiyanka asked, peering down at the old man.

“No I’m not saying Nyaka should not pay his taxes,” Alkatan said. “What I’m saying is this: since you have thousands of cows and hundreds of sheep and goats, you should not take Nyaka’s only goat. It’s all he has and his daughter depends on its milk. What should happen is that you give it back. And I am not begging you. I am telling you to return Nyaka’s goat right now.”

“What?” Kiyanka loudly said, gazing this way and that. “What a strange thing! An old man I don’t even know and have never seen comes into my village, he comes into my compound, he finds me here, and is telling me I must give Nyaka’s goat back. Old man, do you think you are well? I want you to make me return the goat. I just want to see you do that! We will see who the alkalo here is!”

“Alright then,” Alkatan said, getting up. “I have told you what you must do right now Alkali. If you do not return Nyaka’s goat right now, tomorrow everyone in this village, and all the dogs and vultures around Tonya Kunda will have more cow meat than they can eat in one day. And that meat will come from your cows. In fact, I now say that you must return everyone in this village their goats or everyone in this village and the dogs and vultures will have even more meat to eat from your cows tomorrow. And if you don’t return the goats tomorrow, the people and the dogs and vultures and even the wild animals in the forest of Tonya Kunda will have even more meat from your cows the day after tomorrow.”

“Nyaka, you and this mad old man get out of here!” Kiyanka almost shouted. “And I don’t ever want to see you in my compound or see this mad man in this village again! Do you hear?”

“Let’s go,” Alkatan said to his distraught companion. “You and everyone else will have your goats back. And he will never touch a goat again for the rest of his life. Now let’s go get some milk for the baby.”

As the two men walked out of the Alkalo’s compound, they could hear some of the councilors saying to Kiyanka, “Alkalo, but that old man is Alkatan deh. He was the one who threw Degere down. Don’t you recognize him?” And they could hear Kiyanka loudly retort, “You are all mad! Do I not know Alkatan? This is not Alkatan! This is just an old mad man! Didn’t you hear the mad things he said? He said everyone in Tonya Kunda and the dogs and vultures will eat meat from my cows tomorrow! He’s just a mad man! I’m not returning any goats and I want to see how that will happen tomorrow! This village belongs to me!