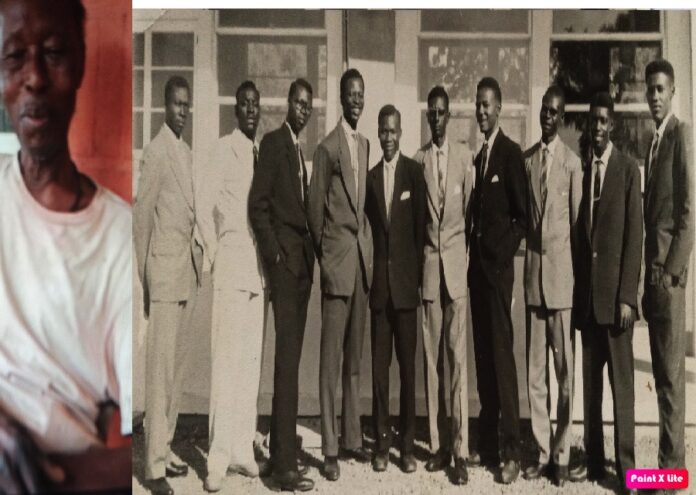 At the end of the school year in 1958, the Roman Catholic St Augustine’s Primary School at Hagan Street, Bathurst, was letting out nearly 35 teenage boys who had completed Standard Seven. The boys were walking out into precarious streets teeming already with hundreds like them looking for work in the capital town of colonial Gambia. Henry Sylva was one of them. Born in 1940, Henry turned 81 recently and, sitting in retirement in his living room, he looks back at the results of a life spent in struggle to make a living that now leaves him a husband of fifty-years’ standing, a proud father of successful children, and the lord of his manor under his vine and fig tree on two acres of land where over the years he built houses for the family with his own hands, brick by brick, with knuckle calluses still showing proof of it.

A man of Mandiago extraction, says: “Aa nor tross, aa nor tiif; all naa me sweat!”, looking around his parlour with a conviction drilled in thrift, determination, and the kind of hard work ethic best discernible in the DNA of the colonial Krio people in whose language he is saying it. In English, he is saying: “I didn’t borrow a penny; I didn’t steal; everything here came from my hard work.”

It must have taken some character for a young man under the pressure of unemployment to design such will not to bend to all the temptations that drove many young men abroad or to prison or penury in those days before independence.

To pass away the long hours of idleness after school a handful of Henry’s former school mates found refuge in a shoemaker’s shop on the property of a Krio man named William (Willie) Jeremiah Lusack at No. 16, Fitzgerald Street in Bathurst. From his Krio board house above Willie Lusack exerted kindly fatherly oversight on behaviour in the shop below where nearly 20 young men gravitated around one of them named Robert Sylva who had solved his own idleness by becoming a shoemaker’s apprentice. Robert had attached himself immediately to an older man, one Mr Sam Boogie, from Sierra Leone, who was a master cobbler. He began learning the details of polishing and shaping leather under Mr Sam who had taken a liking to the boy and wished to teach him a trade.

“Robert learned fast and seemed to be enjoying shoemaking,” Henry reminisces. “He was lucky since there wasn’t much to do after we left school.”

Young Robert liked Mr Sam too. The man was as much a craftsman with leather as he was with footwork on the dance floors in town in shoes he made for himself. He quickly earned the nickname “Sam Boogie” from the fancy moves to the Boogie music from Europe that had reached The Gambia after adaptations to the American swing and then on to blends with jazz and blues. Robert himself did not miss a party anywhere and anytime the boys threw one. So, it was a warm father-and-son team in the shop.

And that was that until 1961 when the country of Sierra Leone gained independence from Britain. There was a huge celebration for Mr Sam and the Sierra Leonean community in Bathurst. There was music and dancing and good old Mr Sam was proudly in the middle of the merriment. Several months after, that must have been early in 1962, Mr Sam confided in Robert. He had decided that he would go back home, a place he had long missed since he came to Bathurst in the aftermath of the Second World War to try and eke out a living in his profession. Indeed, one day, Mr Sam said goodbye to Robert but not before leaving the shop to his faithful assistant – everything from shoe lasts, needles, glue, nails, studs, brushes, polish, a wooden cobbler’s anvil, tanned leather, to old khaki aprons – everything, even a list of a well-to-do clientele from Krio homes around.

“With Robert now running the shop by himself his old school friends found a rendezvous,” Henry remembers. “We were there morning, noon, and night. And what else could we do to pass the idle hours than get on with making music the way Old Sam Boogie loved to do.”

Some of the enterprising boys went out and found a box guitar; Garber brought a mouth organ; someone fetched an accordion. Coincidentally, it was a time of heightening activity in the political scene in Bathurst. Pierre Sarr Njie, leader of the United Party (UP), and David Kwesi Jawara of the People’s Progressive Party were butting heads as to who would be better at leading the country when the white man leaves.

The UP Youth movement under Uncle Louis L. Prom had invited the Bantu Jazz from Congo for some campaign and fund-raising engagements in town. Something sparked from there and the boys added Congolese “tumba’ drums and maracas to the line-up of instruments. Much against the wagging tongues of a Krio society that looked down on any young man that would be aimless enough as to go about plucking on a box guitar or beating on hand-carved drums, the Christian members closed their eyes to the stigma and played on. With the inimitable vocal blend of Haffner, Baby Boy, and Koroma, the Boogie Boys band was born.

Customers wanting a shine or who came to collect their repaired shoes sometimes had to make their way through the crowds listening to the music outside the shop; and there would be dancing out there on the street pavement. As was to be expected the young musicians themselves were not angels; there was the occasional temper and flare up. But all was soon settled and the music and the camaraderie continued.

Each of us became skilful in some aspect, polishing, or sewing, or nailing leather, or even delivering mended shoes to customers. Although older shoemakers such as Pa Bennett, Pa Samuels, and Uncle Kobnah were well established, the Boogie Boys claimed their shop was the most popular at six pence a shine and at five to sometimes ten shillings for more intricate work like sole or heel replacements. Each boy was learning how to make ends meet in other ways of course and, since there  were feast days like Christmas in mind to celebrate, everyone saved up to order suits from Oxendales and Langfields of London, UK. Pa Noah, an entrepreneur living on Primet Street in Soldier Town sold beautiful top-range shoes; Pa James Amusan from his haberdashery on Hope Street in Newtong (New Town) was famous for his Double-Two and Arrow dressing shirts; he sold swede desert boots too that were more popular then with up-and-coming working men in the Civil Service.

After a year in practice and developing a rhythmic Afro-Cuban sound, the Boogie Boys were ready for engagements in clubs and party halls. A rogue promotor nearly made off with £80 he took from them with empty promises to order them guitars, drums sets and brass instruments through the United African Company. They were lucky to get their money back, thanks to police intervention. They carried on with make-do instruments from local materials and entertained their adoring fans at the Black Star Bar and at the St. Mary’s School Hall.

Fame spread fast. Things got so good that Robert would readily call a bluff: “We are The Boogie Boys; we sting and we bite.” Of course, there were lovely girls among the fans who were getting stung and bitten although some of them were having it their way with a couple of the boys who began making serious marriage proposals.

“Nevertheless,” Henry says, “I was watching the calendar. Time waits for no man; it was 1963 and I had turned 23. My father had died when I was only four-years-old. My mother had nothing and we got by on the slimmest of anything you can think of. I decided that boyish days had to be over and done with. I set aside my skills in shoemaking and music and I found a regular job as store keeper at the PWD (public works). It paid pittance but after probation and three years on posting in Basse in the provinces I returned in 1969 and, from my savings of ten shillings (D2.50) a month at the Standard Bank of West Africa, I withdrew D135 and bought this land in New Jeshwang.”

Henry then commenced the urgent task of housing his mother: cement was retailing at D1.25 per bag, ceiling cardboards at D1 a sheet, corrugated iron was selling at D15 for a packet of twenty sheets. A lorry-load of sea sand cost D5. He never looked back. “When the mason I hired left me halfway building the house,” he says, “I took it on myself. The Chinese were new in town with techniques of making red bricks; I understudied their methods. You can see the yard fence today; I laid every brick myself, working at it every day after I closed from work.”

But, while Henry was struggling on his own to find solutions out of poverty on home turf, some of the boys were thinking differently. Makasutu surprised everyone when he came one day and announced that he was leaving for Blighty. Where was that? the boys asked. That was the nickname for England. There was no mincing of words; Forster had travel papers and a boarding pass from the Elder Dempster shipping agent. The floodgates were opened; Europe became the number one subject at the shop or in the beachfront gardens behind the Atlantic Hotel where the boys spent leisurely Sunday afternoons. From then on, every month, one boy would come to say goodbye: it was Kayo, then Baby Boy, then Tony Foxx, and on like that.

The rest carried on trying out other preoccupations to make ends meet but it was growing harder to keep the band together. It would be a terrible hit when our lead singer Haffner and the wizard bass player Valentine drew away to join the new Super Eagles band that was offering bigger and more stable prospects.

However, the end came in earnest when, sometime in 1964, Robert Sylva, the original Boogie Boy shoemaker, passed the shop on to an older relative and went to work for better wages in one of the French firms. Courage Lusack did not make it out to Europe. Instead, he and a much younger fellow, Joe Senghore, who was an devoted admirer of the Boogie Boys found their own wings via Dakar port and landed jobs in the Bong mines in Liberia. Joe is 76 now and happily retired in his own family home in Kanifing.

“I never went anywhere,” Henry says with deep contentment. “I have never wanted to. I believed from way back then that if there was anything I could make of myself it had to happen here. Over the years as my walls were going up I said to myself at least when my friends come back from Europe they will find me in my own place. I can invite them over for relaxing weekends together in my garden. I still have my battered box guitar; perhaps we can make happy music again just as we did sixty-three years ago when we were The Boogie Boys.”