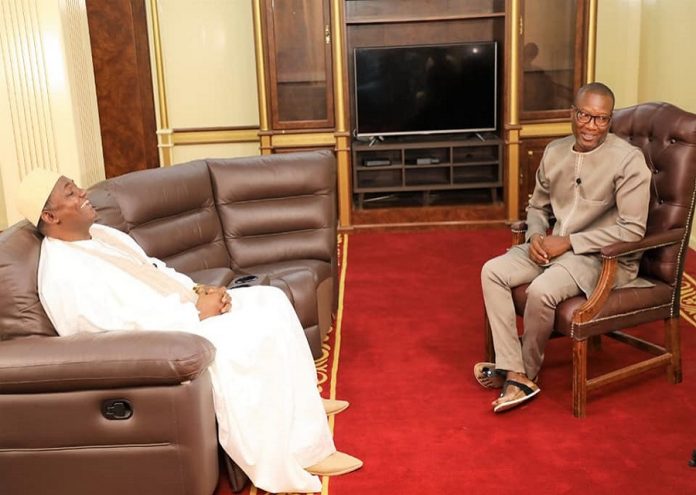 The prime-time interview by Paradise TV’s Harona Drammeh with the president tonight has raised fundamental issues that need urgent analysis lest we allow falsehood to prevail over the truth. On a number of issues, the president’s responses expose either a deliberate attempt to mislead or his limited understanding of fundamental issues.
In the first place it was strange to hear the president narrate how he personally formed his cabinet on his own at the very beginning. In the interview the president did not speak about any technical committee with which he worked with in identifying individuals of competence to appoint as ministers. Rather he spoke as if it was about a benefactor who appeared at a schoolyard to share sweets among children! The cabinet of a country is not a club or a private entity such that one man could just decide on his own to pick and choose. Hence when the president spoke about how he chose his cabinet it clearly demonstrates poor leadership that the country did not deserve at the time.

President Barrow knew that he was at the head of a coalition of parties and they had an MoU that has created all the processes and structures for decision-making especially in the formation of the cabinet. Under Section 4, the MoU stated that cabinet positions would be allocated in consultation with each signatory stakeholder (party leader) in the Coalition Executive Committee (CEC). It went further to state that all presidential appointments and removals shall be done in consultation with the CEC, and that in the event of the removal of a minister, the president will consult the signatory stakeholder affected by the proposal before the appointment of a replacement. Barrow never followed this procedure!
Therefore, if Barrow had followed the MoU, he would not have had any difficulty in choosing his cabinet ministers and he would probably have had the most qualified Gambians.

Furthermore, he would have avoided the numerous cabinet sackings because the mechanism is already there in the MoU to contain any crisis within the cabinet. Therefore, what Barrow did not say in the interview was his blatant disregard of the MoU only to monopolise decision-making from beginning to end to the disadvantage of the country.
On the issue of security sector reforms, it is pathetic that Barrow equates the military with any other public institution even though he knew the role and the situation of the army during the dictatorship and the impasse and until today. Whether President Macky Sall visited any military barracks or not in Senegal cannot be a reason for a Gambian president to also visit or refuse to visit his armed forces. The period and circumstances in which Barrow came to office inevitably require that he visits his troops as an indispensable step in the right direction towards promoting security sector reform.

Visiting military barracks cannot be equated with or substituted with visiting any other state institution. In any case, Barrow has indeed visited other public and private institutions. Does that mean those institutions are not part of The Gambia or are more important than other institutions he did not visit? Hence his remark on this issue is utterly unfortunate and unbecoming of a president in any society.
What is even more unfortunate about that statement is when he sought to caricature voices and citizens who demand that he should have visited the barracks. His remarks once again showed the divisive nature of this president. As the leader of this country, Barrow must be told to speak with conciliation and compromise in order to bring our people together. He must not seek to demonise, caricature and alienate people.

Barrow must realise that as the commander-in-chief of the Gambia Armed Forces it is not enough that he consults with the CDS everyday and has other means to know what is happening inside the barracks and with soldiers. Rather, his personal and direct interaction with the military serves to reassure the troops, build trust between him and them and raise morale among our forces and enhance national security and stability. As the president that is a source of strength that the CDS cannot provide him.

On human rights and democracy, Barrow must be told that he has to be consistent and committed to these objectives. As he acknowledged knowing about the arrest of ‘3 Years Jotna’ people, one wonders why he did not speak against the police for arresting 15 Gambians even before they embarked on a peaceful demonstration? Hence Barrow cannot speak about democracy and human rights here and at the same time his government is damaging the rights of citizens with impunity. Was it not Barrow who sacked a National Assembly Member just a few weeks ago yet he can have the audacity to speak in favour of democracy?
It is interesting that the President is trumpeting the rule of law and building institutions yet under his watch citizens get arrested with orders or instructions coming from ‘Above’. If indeed Barrow believes in the rule of law and institutions why are orders dropping from State House instructing the police to arrest citizens such as the ‘3 Years Jotna ‘people or Dr Ismaila Ceesay among others?
What I find most hilarious was when Barrow speaks about his commitment to keeping his word. Has Barrow forgotten that he has already flouted his own manifesto and campaign promises? Two years into his presidency, Barrow is not only determined to serve the full five years but he has set himself to go further to form his own political party to stay in power even longer.

It is disgracefully unfortunate that Barrow has nothing to defend his U-turn from three to five years other than to say the task he found in government was so huge that three years would not be enough to address. Which government, in fact, can solve all of the issues and concerns of its society even in a century? Secondly, if the CRC, TRRC and security sector reforms are late, is it not because his government failed to start these processes and create these institutions on time? Two years since taking office, it just today, May 26, that the security sector reform was formally launched? Let the President be told that he cannot deliberately fail his own words and then create excuses to justify his failure and then expect citizens to buy that narrative!
Therefore, let the President realise that the three years transition is not a mere option. It is his word and promise which he sold to Gambians when he was seeking the mandate of the people even though he knew very well that indeed the Constitution of The Gambia provides for a five-year term for a president. Hence Barrow cannot now turn around to speak about the three-year promise as a matter that just emerged today or last week or that he has lot of work to accomplish. I expected the President to advise himself to honour his own word and step down by 19 January 2020.

Barrow concluded with the idea of legacy. But how does one build and leave legacy? It is not enough to make high-sounding and self-righteous and chest-beating moral statements when in practice your actions speak a different language? Integrity is when words match actions. Barrow is good at throwing proverbs, clichés, religious slogans and complex riddles, but he must realise that leadership and legacy are not based on mere words that do not match deeds.

If Barrow wants to leave a proud legacy, he must keep to his word, demonstrate consistency and total commitment to the respect and protection of human rights and adhere to the rule of law and ensure transparent and accountable institutions and stop interfering with those institutions. So far, he is woefully short of these values and standards in practice.
Finally, while commending Harona for a good interview but it could have been greater if indeed he brought more facts and challenged the President stronger in order to hold him more accountable! 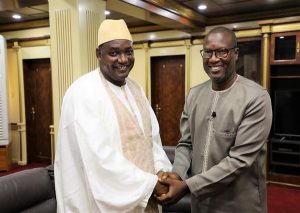