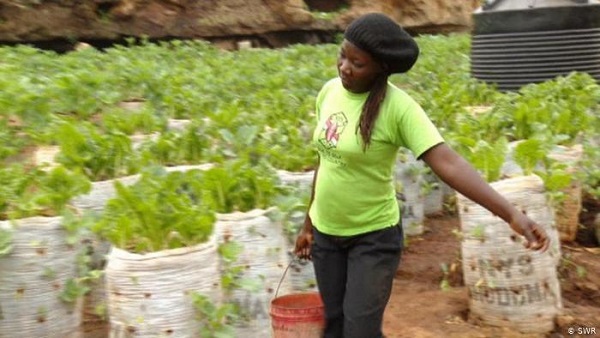 Good Morning all Gambians and all Protocols respectfully observed!  Gambia for all, united, committed and willing for a shared destiny, I greet you all in the name of our collective agriculture agenda!
I wish to engage you as all of us directly or indirectly on a daily basis or seldom are connected to agriculture in the Gambia through the food you eat. Agriculture is the backbone and the bed rock of our economy and Gambian communities. Agriculture is the source of our food. True independence starts with food self sufficiency and should be the first and focal point of our development as a nation and a people.

Remember. 77% of Gambians and there about are directly or indirectly employed by agriculture and agriculture still remains the highest earner of income for Gambian households and the Government. It is also interesting to also note that 67% and there about of our population are young people under the age of 40! If agriculture is managed, invested and harness properly the future is very bright for The Gambia and Gambians.
Agriculture and food production is strategic to all developmental woes and milestones executed and ongoing and planned in The Gambia. However, agriculture also remained the most neglected sector in The Gambia since independence from colonial rule. That has accounted for many of our problems that we encountered and continue to face as a nation and a people. If the agriculture agenda was or is sorted then most of its attendant development woes and problems would have been solved leading to our true independence and further development as a nation and a people.

Jawara and Jammeh did pay lots of lip service and political propaganda to the agriculture agenda with little being accomplished compared to what could have been accomplished Jawara did very well with the GAMBIA COOPEERATIVE UNION (GCU) and some of its famous projects and programmes in the creation of the Gambia Produce Marketing Board (GPMB) and supply of inputs as in seeders and seeds to Gambian farmers. Those success stories are still replicating themselves in many and diverse forms in The Gambia changing lives and communities despite its demise some 28 years ago.

Jammeh did well too with the hundreds of tractors he bought for farmers and farming and those gains are still changing lives and livelihoods in The Gambia and for Gambians long after he is exile. My surprise and pain sprang from the fact that I cannot fathom in what name of development or better still what common sense could someone or some so called authority sell on the cheap those tractors that were given to Gambian farmers by Jammeh? I divorced Jammeh ages ago but the good things he did must also be preserved for Gambians and posterity as we did for Jawara and his Cooperative CPMS, GPMB, loans to Gambian farmers. Gambia for all Gambians! Those who cannot bring an egg to Gambian farmers should never sell tractors given to them. These so-called fake technocrats at the Ministry of Justice of Barrow with their unethical Minister are wrongly informing, educating and misleading the President to sell those tractors. Gambian farmers are waiting for Adama Barrow’s ballot boxes and will answer to him in the same frequency as he being misled now to sell those tractors that changed lots of lives and livelihood in The Gambia. Since the coming of Barrow and the Coalition Government that is still under the spot light of a broken Pac or divided Bloc while Gambian farmers are still gob smack as to what led to that decision to sell those tractors? Whatever the political reasoning or labeling by Gambians and donors it is Barrow’s government who are compounding farmers’ woes instead of mitigating them as our agriculture is more neglected today than ever before in the history of our great country, The Gambia.

Before we delve into those Barrow Government failings let us look at the CARDINAL CHANCE AND OPPORTUNITY LOST when the whole world waited and was willing to help The Gambia get on the FAST DEVELOPMENT TRAIN by giving the Gambia Government and Gambia people pledges at the Donor conference in Brussels? This was the biggest opportunity where the Gambian Economy will be jump started to accelerated development and into the gallery of success stories in the likes of the Ruwandas. It had happened then our agriculture could have been cemented and given the kick start that will revolutionise it in this country forever. But we missed it by the following factors:
Our decayed class and civil servants with Ministers in the lead have been so affected with Jammeh days poverty so much so that when international conferences come, they think not about their notes, lectures and manuals but the PER DIEM. We have become a nation of per diem grabbers, per diem thieves, per diem lobbyists, per diem marabouts and per diem generals. Sad! This per diem thing is killing our economy! Those who went to Brussels did a very bad job.

They could have saved the Gambia forever but they missed the points and ultimately screwed up the opportunity!
Square pegs in round holes at Ministry of Agriculture are the biggest setbacks to the effect execution of the Trade seasons. They are still there and the problems will equally persist because they lacked the competence and expertise to run that Ministry and make good and lasting deals for Gambian farmers and Gambian groundnuts. The Ministry of Agriculture time and time and always got the Trade Season dynamics with its other operators wrong and here we go again for December 2019.

Moving forward, our farmers were and continue to equally suffer when that could be avoided if it was not for the lack of competent people to harness the donor package at the Brussels Conference at the Ministry of Finance and Economic Affairs in collaboration with National Development Plan (NDP) band wagon and the Ministry of Agriculture.
Our farmers’ hopes were equally dented by lack of access to those strategic funds with Barrow’s employment and recycling of the Jammeh enablers like Mambureh Njie into strategic positions of Government which brought about seemingly donor fatigue to fund the too hyped NDP.

Gambian farmers are very unlucky and we all celebrated and hoped that with the dawn of the Third Republic and Adama Barrow farmers will be liberated from erratic trade season prices and lack of fertiliser and seeds. We were wrong and now we know all wines are from the same factory! It is sad and is well documented that our new masters in the coalition members decided to see self interest over country.

Why can’t they bring back the processing of groundnut oil on Gambian soil and the renovating and revamping of GGC? Is it that Gambia lacks talents and brains to make this sleeping giant great again? We think we can do far better and we were hopeful when the Barrow Government dawn! Our hopes are seemingly being dash yet again yet another time again!

We are on the threshold of Barrow’s Third Trade Season ‘Tret-to’ and there is nothing tangible to suggest that we are heading for a successful trade season after the past two in December 2017 and December 2018 were poorly executed. The December 2017 trade season had massive problems of lack of adequate crop finance and poor prices. The December 2018 trade season had crop finance problems and the entrance of lots of dealers and middle men. While the declared prices were good but the cash never reached our Seccos on time and people went on for months after selling their harvest to the Seccos before they collect cash.

There was a whopping opportunity in 2019 to distribute free fertilizer and seeds and that never happen after the Brussels’ Donor Conference.
There was supposed to be very successful trade seasons since the ousting of Jammeh but it has not happen so far.

There is supposed to be more tractors and farming inputs they is yet to happen and instead we have seen a hidden hand acquiring those tractors and sending them across borders to develop other countries.

Gambians and Gambian farmers should have better lives by way of better farming techniques and better prices for their harvest but this is also yet to happen.
We are barely eight week to the start of the 2019 Trade Season ‘TRET-TO’ but nothing tangible has taken place, thus:
The prices are yet to be declared and I can bet my last Dalasi that the time they announce it Senegal would have done so four weeks earlier. I will equally bet that 75% of the groundnuts would be sold to Senegal before the Ministry through whatever outlet is approved is out in the depots to buy?
The defunct Gambia Cooperative Union is nowhere near being reborn or relaunched or reinitiated.

There are no Secco (Buying Points) meetings or meeting of Presidents of Seccos for the 2019 Trade season.

There is no seriousness from the Ministry of Agriculture to form a body that will efficiently purchase the harvest of Gambian farmers. What surprises me most is what has a Ministry of such significance be preoccupied with 3 years Jotna instead of the job at hand for Gambian farmers?

Our farmers are still hoping for a better Gambia where farmers will have better lives. Going round the country we have come across famers and farming communities whose hopes are dashed are their poverty today is more compounded than their status way back in 2007.

100 years of Communist Party of China