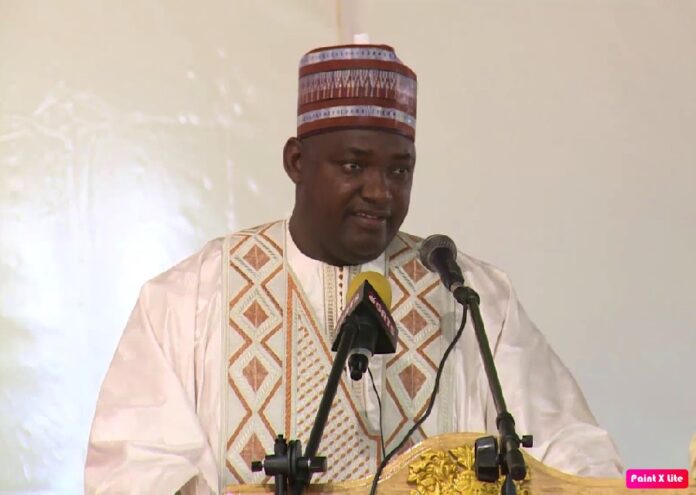 The Covid-19 pandemic has brought many countries to their knees. Regardless of jurisdiction, wealth or level of development, the pandemic has hit economies worldwide. Fighting the pandemic requires money and adequate scientific knowledge. However, many countries like the Gambia have adopted strategies that are deeply rooted in ‘politics’, not science.

When Covid-19 first hit the country, Barrow’s government had encroached to an unprecedented degree into the daily lives of citizens by prohibiting religious gathering, closing of markets, gyms, schools, banning social gatherings, etc. These strategies have arguably helped in the fight against Covid-19. The government did some good in controlling it to some degree but never defeated it. In fact, violations of the regulations were rampant.

The Covid-19 pandemic which forced the country to shut all its doors, has economically hit most Gambians (livelihood disrupted) at home and abroad. This is manifested by the GDP growth decline of -1.8% in 2020. Notwithstanding, as a lobbying machine, the Barrow government has hidden behind Covid-19 to push for aid, grant and debt relief. Within a space of 2 months, the IMF and the World Bank had approved over US $30 million funding if combined under the Rapid Credit Facility and emergency assistance respectively in April 2020. Furthermore, thanks to Covid19, the government secured National Assembly approval of D743 million as a relief package.

These and other funds have helped the government in its programs.  For example, a food relief package saw food items distributed across the country through the Governors, Chiefs and the village head (Alkalolu) but the impact of these funds are seen by the president as his own doing. In his recently concluded tour, he had claimed how his government has been the first in history to provide such a package. Perhaps, he needs to be informed that this is the first time that such a pandemic is hitting the Gambia. Needless to say that the distribution of the package was very problematic as many poor people especially in urban Gambia claimed that they had not received any support.

On the other hand, many other regulations declared were not enforced to the letter which begs the question, whether the declarations were just made to signal the existence of a serious government. More worrying though is that the wearing of masks in public was made a requirement but all kinds of masks were seen circulating in addition to the non-adherence of the regulation. Which of those masks types were efficient in preventing the virus remains a mystery to many of us? Was the government just interested in seeing people wear the masks? Also, despite the government asking commercial vehicles to limit the number of passengers, such was not imposed on the ferries plying Banjul-Barra. What was the science behind this? To date, no explanation has been given. With the number of Covid-19 cases surging again and a more contagious variant of the virus reported in the Gambia, one may ask whether the Barrow administration has lost sight of Covid-19? Clearly, it is his constitutional mandate to go around the country and hear from people themselves on issues affecting them; however, throughout the president’s tour, the narrative is that of a political rally, threats and big promises than that of sounding the needs of the people. Key among the president’s promises is the second round of the food relief package. This was echoed by the president and his ministers throughout his tour. What remains unanswered is where will the money come from? Worth mentioning is the reluctance of people to wear masks throughout the president’s tour and the president seemed not to bother. No where did the president encouraged his supporters to wear masks before coming to his meetings.

Having relaxed the regulations, embarked on a highly politicised tour and promising another relief package: Is the president expecting another round of Covid-19 relief funds? If yes,  is the Gambia heading towards another lockdown? Possibly as the number of cases spike, will the president use this for another funding opportunity to fulfil his promise before the election in December? Is the spike of covid19 cases coincidental with the president’s declaration of a second round of the food relief package? Is it deliberate or coincidental? Will another lockdown mean slowing down other political parties? What will be the reaction of political parties? Would we see Barrow flop again? What is the government’s strategy regarding the Covid-19 vaccine? Are we waiting for the goodwill of the international community? Or are we going in for herd immunity?   Having all these questions in mind tells me that there will be more politics than science in the management of Covid-19 by government and opposition parties.