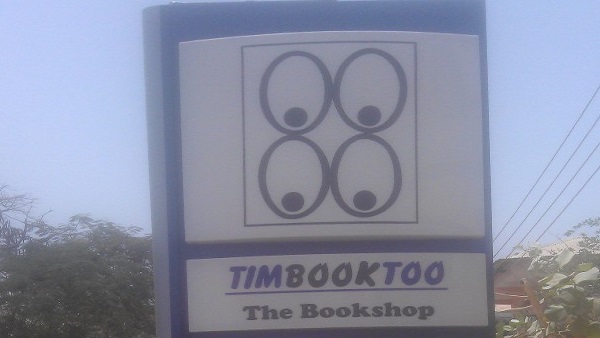 Thieves broke into the Timbooktoo bookshop on Garba Jahumpa Road Wednesday night and made away with hundreds of thousands of dalasis.

Two nights before, the Cape Point home of Sheriff Bojang, a former Information minister and the proprietor of The Standard newspaper was robbed by an armed gang.

In both incidents, the thieves stole cash and other valuables.

Timbooktoo owner Ousainou Jagne told The Standard that the thieves broke the front door of the store by cutting through the glass and the iron.

“They just walked straight to the cash box and stole D200,000, US$400bank notes and some petty cash before leaving by the main exit door,” Jagne explained.

Hesaid he only got to know about the theft, when a Standard newspaper distributor, Muhamadou Bandeh, who was on his early morning deliveries, noticed the burglary and alerted people nearby.

Jagne observed with a tinge of dry humour: “What upsets me most is that the thieves did not take any books to help advance themselves or to improve their thinking but were only interested in the cash.

For all I know, they are going to spend this money lavishly to destroy themselves and continue to commit more crimes,” he said.

Meanwhile Mr Bojang disclosed that after the thieves broke into his house, they ransacked two bedrooms and his study and took away six smart phones, a Mac Book Air lap top, Samsung tablet, a collection of watches including a Rolex Submariner Date and cash amounting to 1,800euros and 790 dalasis.

A Gucci bag containing cash and personal ID documents belonging to his wife was also taken but later found in the compound yard without the cash.

The thieves left behind a knife which is in the custody of the Bakau police investigators.
Mr Bojang said the burglary occurred between 2am and 5am Tuesday and that the robbers scaled the compound fence and used a crowbar to prise open the kitchen door from where they entered the house.

Bojang said armed thieves have gone on steroids in the area as two other homes have been burgled in as many days and several vehicles broken into and batteries and radios removed.

“The police, particularly the anti-crime personnel should redouble their efforts to arrest this spate of banditry and vagabondage in town before it gets out of hand…” he

ABOUT US
The Standard Newspaper brings the Latest News from the Gambia, Africa and the World. Get live news and latest stories from Politics, Business, Technology, Sports and more. The newspaper is published and printed by XL Standard Co. Ltd. located at Sait Matty Junction, Bakau. Telephone: +220 4496481. Email: i[email protected]
FOLLOW US
© 2020 The Standard Newspaper (The Gambia) - Site by DigiTech Solutions