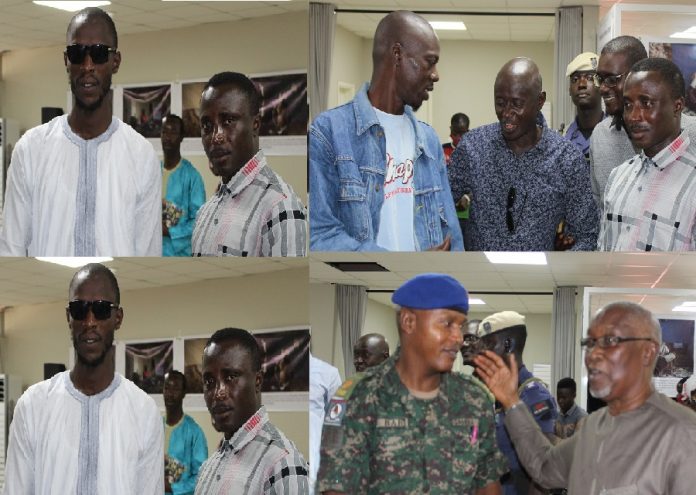 At least four victims of human rights violations during the former regime have reconciled with their tormentors following their testimonies at the TRRC.
The victims narrated harrowing tales of torture and myriad forms of ill treatment suffered during the Jammeh years in power.
Among them was the former Inspector General of Police Ensa Badjie who agreed to forgive Soriba Condé.

Condé revealed during this past session of the commission hearings that he was induced to give false testimony which was used to put the former police boss behind bars for life.
He said he did so on the orders of former NIA director Numo Kujabi and former IGP Benedict Jammeh, both late now.
Badjie who has since been released from incarceration and reinstated in the police as a regional commissioner, said he has forgiven Condé and all those who partook in his arrest, torture and jailing.

“It was not his (Condé’s) fault. Things were not easy at the time and he had no choice but to comply. The target was to get me dead but thank God… I have forgiven you [Condé] wholeheartedly,” Badjie said.

Former agriculture minister Omar Jallow also reconciled with Major Bubacarr Bah who confessed to have tortured him leading to a loss of sight in one eye during detention in the aftermath of the 1994 military coup d’etat.

The visibly remorseful major said he deeply regretted his role in the torture of Mr Jallow saying it was done at a time when he was “very young and energetic but misguided”.
“There was a lot of misinformation about OJ and I did not take my time to verify before committing the heinous act. I am therefore appealing to Mr Jallow and his family to forgive me for the pain I have inflicted on them,” Bah who is still serving in the army, pleaded.
A magnanimous Mr Jallow said it is human to make an error and that he has forgiven Major Bah who according to him only acted on the orders of his superiors.

“I have forgiven you and still hold you as my nephew and son. This is what The Gambia needs. If Ghana can reconcile and put their past behind them, why can’t we?
Ebrima Jammeh, who has been tagged the villainous title “Prison Chief Torturer” and Inspector Malang Tamba also reconciled with prison lifetimers Lamin Jah and Soriba Condé who they abused at the state central prisons at Mile 2, Banjul.

The perpetrators presented symbolic kolanuts which the victims accepted.
The chairman of the commission’s reconciliation committee, Imam Ousainou Jallow, said since reconciliation is a major part of the TRRC’s mandate, his committee has taken proactive steps to facilitate forgiveness between the abusers and the plaintiffs even before the commission concludes hearings and presents its reports and recommendations.