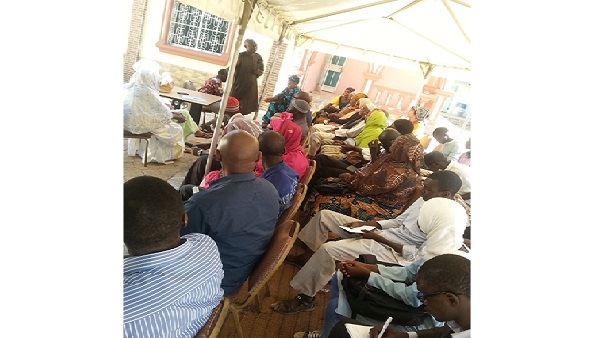 The commission set up to dig into the atrocities, extra-judicial killings and other human rights violations committed under the regime of exiled former President, on Tuesday paid a courtesy call on the Gambia Centre for Victims of Human Rights Violations, as part of the commission’s outreach activities.
The vice chairperson of the commission, Adelaide Sosseh, who led the delegation, explained the purpose of the visit which she said was centred on the Memorandum of Understanding signed between the commission and the victims Centre.
The vice chairperson expressed hope that the MoU will cement the relationship between the two institutions as far as their mandate is concerned with regard to reconciliation and reparations
“The TRRC will endeavor to work closely with the Victims Support Unit so that it can move in the right direction. We cannot meet all the expectations but we will do our best humanly to reach out to many people who are victims,” she assured.

Baboucarr Njie, a board member of the centre, gave a historical formation of the centre and explained that “This organisation was founded in April 2017 by a group of victims and Gambians who were also in the Diaspora. Since the centre was founded, it had registered 800 victims and we have been trying in different forms to see how we can bring the victims together and their representation to the national level and as well as [at] the international level.”

Mr Njie also disclosed the source of funding for the centre which is through “voluntarily activities and donations from both local and international partners such as German Embassy Banjul, Article 19 and a Swedish NGO among other donors.”
He said they are working “hard” on a daily basis to support the victims, most of whom suffered rights, freedoms and other violations.
“We provide medical and educational support to quite a number of victims through collaboration with Article 19 to Senegal for further medical evaluation and treatment. We also had a psychologist who provided psycho-social support to quite a number of victims especially those who were seriously abused and traumatised, ”Mr Njie noted.