Tuberculosis: “The captain of all these men of death” 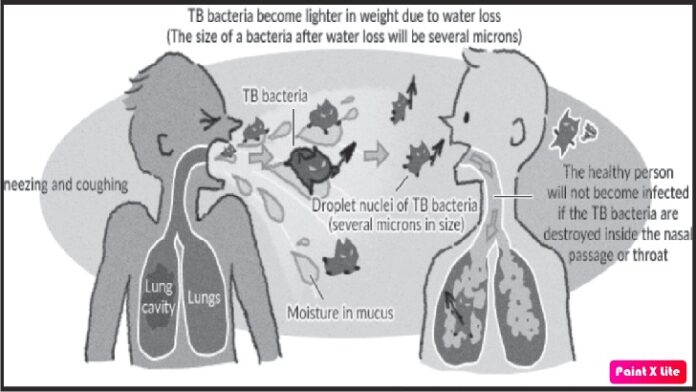 March 24, 1882 was a historic day in the medical world, a day in which the beginning to the end of the then so-called “white plague”, now known as tuberculosis. Dr Robert Koch, on this day announced the discovery of Mycobacterium Tuberculosis, the biological agent that has been found guilty of causing tuberculosis infection across the globe. The day now designates a time wherein the world is sensitized about the existence of tuberculosis, taught and educated on the health concerns with regards to Tuberculosis and the means of stopping it’s spread.

Tuberculosis commonly known as TB is an infection of the lungs caused by a bacterium called Mycobacterium Tuberculosis. It enters the lungs via inhalation of respiratory droplets containing the bacteria, which must have been gotten from an infected person. Here it grows and causes damage to the lungs (intrapulmonary TB). However, this smart bacterium does not limit its action to the lungs alone, it gains access to the blood stream where it establishes infection in other organs as the brain (extrapulmonary TB), kidney, and spine. This makes the bacteria very deadly.

In The Gambia, the mortality rate of tuberculosis infection in 2019 was 19 deaths per 100,000 people. The incidence in this period was 158 cases per 100,000. These values appear to be small or an insignificant, but doing the math in relative to the total population makes you realize that quite a number of people are dying annually from this disease in our beloved nation, The Gambia.

Modes of transmission of tuberculosis

Any means that allow or permit the entry of the Mycobacterium Tuberculosis into the lungs or respiratory tract. These include:

Coughs: people are fond of poor hygienic practices when it comes to coughing, and this leads to the occurrence of tuberculosis in many places.

Other modes of transmission include when the droplets containing TB fall on surfaces and contaminate them. When an uninfected person comes in contact with such contaminated surface or object or material and inoculates the bacteria into the respiratory tract probably because they haven’t washed their hands.

The signs and symptoms of TB infection are dependent on the organ affected, as it corresponds to damage to infected organ. These manifestations are:

Remember that there are no manifestations for a latent TB infection

Risk factors:  These are conditions that increase the susceptibility of a person to acquire a disease. In The Gambia, the stand out risk factor for TB disease is household crowding and exposure to a known TB case. Most homes in The Gambia are overcrowded with many people living in a small space, this increases the risk of acquiring the disease. However other risk factors of TB are;

∑          Medical treatment such as use of corticosteroids

∑          Preventive treatment, use of drugs recommended by the doctor as prophylaxis if you suspect you have been exposed to the TB infected person.

TB is not hereditary and cannot be transmitted from parents to children.

Sometimes all a TB patient needs is assurance that he or she is loved and cared for, this can help improve the prognosis of the disease, however stigmatization of TB patients has an incredible effect on worsening the disease prognosis and prevalence in a place because:

∑          They become stressed. Stress increases a substance called cortisol in the body, this substance then decreases the potency of the immune system leading to worsening of the disease

∑          Fear of reporting a case to the health centre due to societal treatment of TB patients may ensue, leading to the increased transmission of the disease.

The immune system not only thrives to fight against Mycobacterium tuberculosis but also fight off any foreign agent that can cause a disease therefore the strengthening of the immune system is of great benefit to our health.

Tuberculosis was once known as “the captain of all these men of death”, because of a novel describing the lethalness of TB, but now its mortality rate has been greatly reduced and recovery is very possible. With more cooperative effort we can put an end to TB infection.

Let’s prevent and control TB and also end the stigmatization of TB infected people. Together, we can drastically reduce TB infection and mortality in The Gambia, our home land.

Should I or should I not take the Covid-19 vaccine?