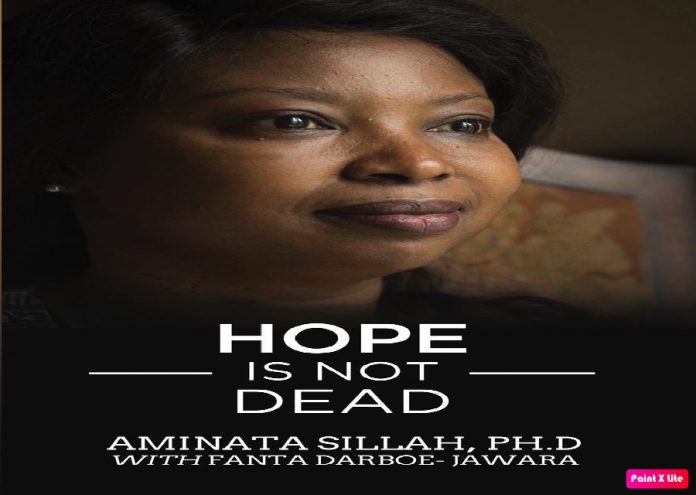 Readers and reviewers, and yes scholars, will have much to say about the book Hope Is Not Dead. To me, Dr Aminata Sillah’s account of Fanta Darboe-Jawara’s encounter with the dictatorship in The Gambia is as much a personal story as it’s a nation’s story. It is also about time and places. Of the last two, it’s the latter — places — that I wish to make some observations about. To go still narrower in scope, I will focus on just two of the many places that make up the book’s setting. The Westfield Junction and the Mile Two Prison.

But first, a passing comment on the book’s title. Hope Is Not Dead is both obvious and curious. On one level, the meaning is deceptively straightforward which gives it power to evoke hope and project optimism. This explicitly defiant declaration of survival and triumph also implicitly connotes a struggle, an ordeal, a trial of will, spirit, conviction, dignity, and faith. On another level, there is a contextual meaning that is more subtle and nuanced, if not more comprehensive. Fanta was arrested during a peaceful protest for the release of Ebrima Solo Sandeng and others, who had been arrested while peacefully protesting for electoral reforms and democracy. Sadly, Solo was murdered in the custody of the dictatorship. Consciously or not, the book’s title is a trumpet of salute to Solo, too, and all those who lost their lives in the long struggle or paid the price of conscience in other ways; that notwithstanding their immeasurable or ultimate sacrifice, the hope that gave them the courage to brave a pitiless thug in power didn’t break or die with them. The hope for the rule of law and freedom in The Gambia still lives on.

To return to the burden of this appraisal, let’s start with the Westfield Junction. It is one of the most public places in the country. “Kairaba Avenue,” Dr Sillah writes: “is place that sets its own pace.

It’s the crossroads where traffic from different directions come from. It’s a place to get noticed, be seen, and usually the site of many rallies and events that call attention to atrocities and where demands for change are chanted by engaged citizens.

On any given day, it is not unusual to see taxi drivers slow down and attempt to pick up potential customers, or security guards hired by businesses attempt to squeeze as many cars into the tight parking spaces around the banks and offices, or see angry drivers who have been blocked waiting angrily for the “duff” (fool) who boxed them in or going into the different buildings asking about the driver of the particular car. Kairaba Avenue is an area that has a soul, every footstep of pedestrians and honk of cars has a rhythmic flow unique to this particular location.”

Though she specifically mentions Kairaba Avenue in this instance, it’s clear Dr Sillah means the Westfield Junction as well. It’s impossible to imagine the buzz of daily activities along the avenue without this popular junction’s particular location as a unique convergence point of the nation’s biggest city. And as she succinctly describes it, the Westfield Junction is the beating heart and the nerves center of the country.

That makes it, in addition to the chaos and opportunities it offers, a contested space between the forces of the dictatorship and the forces of freedom. It’s not coincidental peaceful fighters for democracy and liberty have always been irresistibly drawn to the Westfield Junction.

They’ve done so to make their case to the public. It’s also not incidental the minions of the dictatorship had been swift in swooping down on the junction to squelch any protest in its embryo and drag away the organisers and participants to detention, torture, and sham trials. This was done to make a statement to the public.

That the dictatorship would show brute force, sow fear, and set a draconian example of crushing dissent. These conflicting perceptions and motivations of peaceful protest and violent repression have made the Westfield Junction a significant landmark of political struggle in The Gambia.

The other place, Mile Two Prison, is the opposite. Though an infamous name throughout the country, it’s one of the most secluded places. Only those detained or sentenced there and the guards truly know the hellish existence inside the prison walls. Still, in the span of two decades of dictatorship, the public at large had a good idea about the place.

Even if one wanted to play possum about what’s going on in there, the thug in power made sure to scare all and sundry about the place when he frequently dubbed it, with all the menacing threat his voice and face could muster, his five-star hotel for his enemies. From the prison narratives of Samsudeen Sarr and Ebrima Chongan at the onset of the dictatorship to Fanta’s at the tail end of the regime, the constant fact about Mile Two Prison had been things changed but only for the worse. The general dilapidation and rut of the facility, the filth, the mosquitoes, the rats, the horrible food with sand in it, the hunger and starvation, the overcrowding of cells. And the guards!

Prior to reading Dr Sillah’s account of Fanta’s experience at Mile Two Prison, I perceived the guards as mere minions of the dictatorship. Having now seen for the first time through this narrative how they mistreated female detainees and prisoners, I’ve come to view the guards in a different light.

They (most of them to be fair) weren’t just functionaries of the dictatorship, they were extensions of the thug at the State House. Knowing the only crime they could commit was displeasing the thug by being lenient or humane to the detainees and prisoners, the guards spared the inmates no cruelties large and small.

To humiliate and dehumanise the female inmates, the guards compelled them to come greet them at the office every morning by going down on one knee like servants before a master; and subjected them to unnecessary, random searches of the cells mostly to invade what little privacy the inmates should have.

A judge’s ruling in favour of a detainee or prisoner fell on deaf ears inside Mile Two. The guards would do as they felt like. The rule of law, the prisoner’s rights, and the Constitution be damned!

Another thing to say about Mile Two Prison is, despite its distinct seclusion, it’s in other ways just another racket in the country. In addition to dehumanising and humiliating the inmates, the guards treated them as pawns for extortion and exploitation of their families.

Just like the tax collector, the customs officer, the police officer, the immigration officer, the medical practitioner, the public accountant, the pencil pusher, and the big enchiladas running the state, the prison guards were on the take.

The difference was, if most of the briberies in The Gambia have almost always been optional on the part of the briber, the families of detainees and prisoners had little choice if they hope to send basic necessities and occasional proper meal to their loved ones behind bars.

It must be stated that the dictatorship didn’t create Mile Two Prison. Like most of the state institutions, the thug inherited the prison from the previous government. And Mile Two was already a terrible place when he took power. His greater share of the blame was he deliberately made it worse in violation of his oath of office and sacred responsibility to the nation.

To come back to the theme of hope in the title of the book, there is something about a writing that stays with one long after reading a book. That aspect sometimes delights or haunts the mind through the mysterious power of vicarious experience. One such instance in this story is Dr Sillah’s illustration of how Fanta and her fellow female inmates crammed in an over-crowded cell tried to break the endless monotony of their unbearable incarceration. They played the mental game of recollecting, retelling and imagining their lives before and beyond Mile Two. By seeking some semblance of solace and escape in the refuge of fantasy, even one that’s only momentary, they retained their sense of sanity and reality. They fought, endured and persevered in all the ways they could to stay being themselves as much as possible rather than give in to the prison, the guards and the dictatorship. A point Dr Sillah puts in these uplifting words:

“Fanta tried to find the humanity in each individual, encounter and experience during her time as a prisoner. She refused to allow prison to snatch her breath, to stifle her creativity and her imagination. She knew who she was, she knew she was loved, so this prison and the judge who handed down the sentence would not kill her alive.”

First published in The Gambia Times, at www.thegambiatimes.com/two-things-about-fanta-darboe-jawaras-story

When I was a kid, there used to be an old preacher who would always say, 'sometimes you don't need to die to know...
Read more
Book Review

By Sainey Darboe From the title of the book,'Never Doubt'...one might be forgiven for nurturing aspirations of living by its meaning. But the experiences of the...
Read more
Book Review

By Madi Jobarteh Demba lived a difficult life nonetheless in Banjul; hunger was his constant companion. Without parents around and with poor guardians, DA had...
Read more
- Advertisment -