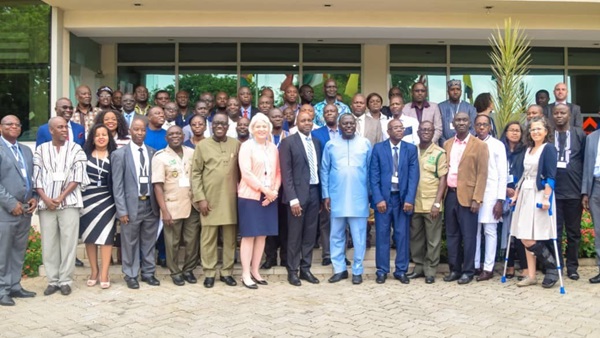 At the 17th meeting of the Conference of the Parties to the Convention on International Trade in Endangered Species of Wild Fauna and Flora, CITES, around 250 new species of rosewoods were listed in Appendix II of CITES – a considerable percentage of which occur in West African countries, namely the tree species from the genera Dalbergia, Guibourtia and Pterocarpus.

These new listings entered into force on 2 January 2017.

For the West African sub-region, implementing the new CITES provisions for international trade in these species has been particularly challenging in view of the considerable illegal trade in rosewood, and the lack of information to support the formulation of non-detriment and legal acquisition findings.

In 2017, exports from The Gambia, Ghana and Nigeria represented 85 percent of the reported global trade in Pterocarpus erinaceus rosewood.

At the same time, according to the Secretariat’s most recent threat assessment on West and Central Africa, profits generated by the illegal rosewood market in these sub-regions are significant, and far exceed those generated by other illegal wildlife markets.

Mindful of this, and with a view to coordinate a sub-regional approach to address this illegal trade, a “Regional high-level dialogue on enhancing the protection and conservation of endangered species in West Africa with special reference to Rosewood” was held from 29 to 31 July 2019 in Accra (Ghana).

The dialogue was organised by the African Union Commission (AUC) together with the Economic Community of West African States (Ecowas) and USAID through its West Africa Biodiversity and Climate Change (WA BICC) programme, in collaboration with the Government of the Republic of Ghana, and the Food and Agriculture Organisation of the United Nations (FAO).

Representatives from the 15 member countries of Ecowas, the CITES Secretariat, international organisations, and the private and non-governmental sectors, discussed and considered the best available information on African rosewoods throughout West Africa, the challenges posed by illegal trade, and the way forward to achieve full compliance with relevant CITES regulations.

Benito Owusu-Bio, deputy minister for Lands and Natural Resources of Ghana, noted that hosting this high-level dialogue gave them an opportunity to learn from Ghana’s neighbours, and define a coordinated approach for tackling this problem at national, regional and global levels.

He further added that Ghana is implementing mitigation measures to counter the illegal trade in rosewoods.

Kwadwo Owusu Afriyie, chief executive of the Forestry Commission, Republic of Ghana, noted that the dialogue took place at a key moment, when grave concerns are being expressed from many and varied sources about the status of rosewood and the rapid rate of its exploitation in the West African sub-region.

The dialogue meeting ended on a high note, with Ecowas member states adopting the “Accra declaration on combatting illegal trade in rosewoods, timber and forest products in West Africa”, in a demonstration of commitment to ensure the long-term survival of their precious rosewood species.

The 18th meeting of the Conference of the Parties to CITES (Geneva, 17-28 August 2019) will cover a range of discussions relevant to rosewoods, ranging from illegal trafficking of rosewoods, guidelines to obtain the best scientific information to support the formulation of non-detriment findings (or NDFs), and amendments to the Appendices for rosewood-listings.

Secretary-General Ivonne Higuero said: “The high-level dialogue on rosewood and its resulting declaration represent a commendable and proactive initiative by West African countries and has strong potential for providing common ground for the construction of a pathway between the 18th and 19th meetings of the Parties to CITES and will strengthen the implementation of CITES for key rosewood species throughout the sub-region.”

Ms Nora Berrahmouni, senior forestry officer of FAO Regional Office for Africa, noted that “Any initiative that aims to combat illicit exploitation and trade in forest resources in the region should integrate the empowerment of communities that are dependent on forest resources for their livelihoods. If well supported with viable socio-economic options, they can champion the stewardship of forest resources and the environment in Africa”.

Stephen Kelleher, chief of party of WA BICC, concluded: “It is exciting to see that our key regional partner Ecowas is joining together with the AU, FAO and other leaders to convene policy makers, practitioners and researchers to assess and address the perilous state of illegal rosewood trafficking in West Africa.

Our hope is that the Dialogue has empowered the participants with information and insight to take concrete action on the ground to halt and reverse the illegal rosewood trade for the benefit of today’s and future generations.”