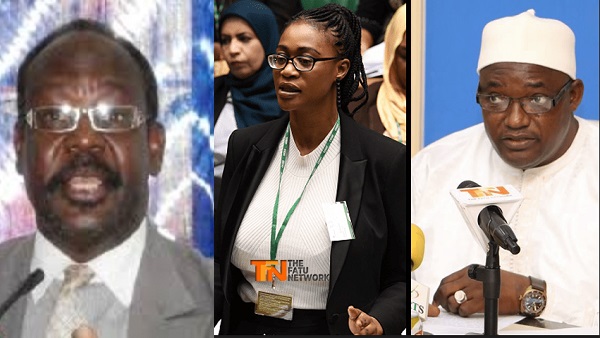 A legal postmortem
I invite reference to a very eye-catching front-page coloured article titled: “YA KUMBA WINS AGAINST BARROW”, published in the Wednesday 29th January, 2020 publication of the widely- read The Standard Newspaper, and authored by one Omar Bah. The title of the aforesaid article was legally wrong. Instead, it should be: “Ms Ya Kumba Jaiteh temporarily wins her case against His Excellency, President Adama Barrow.” The first paragraph of the said article reads: “The Supreme Court yesterday ruled that President Adama Barrow, acted unlawfully in terminating Ya Kumba Jaiteh, as a Nominated National Assembly Member.”]

Section 88 of The Gambia’s 1997 Constitution (which is still in force), is titled: “Members of the National Assembly.” Section 88 (1) (A)(B), of the said Section reads :- “(1) The National Assembly shall comprise:- (A) Fourty Eighty members elected from the Constituencies demarcated by The Boundaries Commission and (B) Five members nominated by The President.” Ms Ya Kumba Jaiteh, who I know very well, because she was one of my former L.L.B. Degree Students, at The Faculty Of Law, of The University Of The Gambia (U.T.G.), was one of the five Honourable Nominated Members, whom His Excellency President Adama Barrow, in his superlative wisdom, decided to nominate, as Nominated Members of the said Assembly, in pursuance of his power, vested in him to do so, by Section 88 (1) (B) of the aforesaid Constitution.

Paragraph 2 of the aforesaid article reads:- “An executive directive was given for Ms Jaiteh’s removal, after she allegedly criticised The President, at a political rally in Gunjur.” The third paragraph of the said article reads :- “But few days after the revocation of her nomination, Ms Jaiteh filed a lawsuit at The Supreme Court, challenging The President’s decision. She claimed that, The President didn’t have the power to do so. The Gambian Constitution, empowers The President to nominate five people to the National Assembly. In March last year, Ms Jaiteh lost an injunction to prevent the swearing-in of her replacement, Foday Gassama…….” The very fact that, Section 88 (1)(B) of the aforesaid Constitution, is only talking about the executive power or authority of His Excellency The President, to nominate five members of the National Assembly, this does not necessarily mean, that H.E. The President, does not have the power or authority, to Officially and Constitutionally remove, any of the aforesaid five members, whom he has Constitutionally nominated. The famous Latin Maxim:- “Expressio Unius Est Exclusio Alterious” (ie when the law has expressly mentioned one thing, it excludes, what has not been mentioned). This Latin Maxim, clearly does not apply here.

The Gambia Supreme Court was very right, in refusing to grant Ms Ya Kumba Jaiteh’s Judicial request for an injunction, to prevent the swearing-in of her replacement, Mr. Foday Gassama, because if it had granted it, this decision could have been interpreted, as an alleged commission of the Parliamentary Offence of: “Contempt of the National Assembly” , contrary to Section 110 of the aforesaid Constitution. However, according to the locus classicus (Latin: best known) English Legal System Case of Sirros Vs Moore (1974), a Judicial Officer (ie a Judge or a Magistrate), enjoys Judicial Immunity, when he or she is exercising his or her judicial functions (ie adjudicating over Cases). Therefore, ex abundante cautella (Latin:- out of the abundance of caution), the learned Judges of The Gambia Supreme Court, under the dynamic and visionary leadership of His Lordship Chief Justice Hassan B. Jallow (C.R.G.), rightly decided not to grant the aforesaid request for an injunction, to Ms Ya Kumba Jaiteh. An Injunction is not granted ex debito justitiae (Latin: as of right), but it is always granted, at a Court’s discretion.

Paragraph five of the said article reads: “But yesterday the Country’s apex Court led by Chief Justice Hassan B. Jallow, ruled she was unlawfully sacked. This paragraph went on to quote, what the aforesaid Court said in this regard:-“The purported termination of the nomination of Ya Kumba Jaiteh through an executive letter was unconstitutional, null and void. The third defendant, Gassama’s nomination is unconstitutional, null and void.” Paragraph 5 went on to say: “The Court then issued an injunction for Mr Gassama, to desist from presenting himself as a nominated member of the National Assembly, anywhere.”

The multi-million dollar question now:- is whether or not, The Senior State Counsel at The Attorney General’s Chambers & Ministry Of Justice, who was representing The State in this important Case, actually pleaded or did not plead Section 231, among his/her submissions, to the Honourable Lord Chief Justice, and Learned Judges of the aforesaid apex Court? When I sent my Legal Clerk, to the Registrar of the aforesaid Court, for a copy of the full Judgment of the aforesaid Case, she was told by The Registrar of the aforesaid Court, that the Judgment was not yet ready. The name of the aforesaid Registrar is, Mr. Ebrima Colley, who is also, one of my good former L.L.B. Degree Students, at The Faculty of Law of The University of The Gambia (U.T.G.). I am very grateful to him, for kindly coming across to me twice in my Office, at The Ministry of Justice, to provide me with necessary judicial information, which I needed very badly, for this very important legal article. “One good turn, deserves another”, as the famous adage goes.

Review of a Supreme Court judgment, by a second Supreme Court panel
After the first panel of The Gambia Supreme Court, has given its Judgment in a particular Case, the losing party, may ( within 15 days from the date the first Judgment was given), request for a second panel of seven Judges, to be set up to review the Judicial decision of the first panel, and the decision of the second panel, shall be res judicata (Latin:- ie a matter that has been adjudicated by a competent court, and therefore may not be pursued further, by the same parties). Section 8 (2) of Supreme Court of The Gambia Act (1999), reads: “The Supreme Court, when reviewing its decision under this Section, shall be constituted by not less than seven Justices of The Supreme Court.” Section 8(1) of the said Act reads :- “The Supreme Court, may review any decision made or given by it, on such grounds and subject to such conditions, as may be prescribed by the rules of Court.” But when a Second Panel has been constituted, The Lord Chief Justice, will not seat as The Chairman, if he had already been The Chairman of the First Panel. He will have to recuse himself from The Second Panel, in full compliance with the famous Latin maxim:- “Nemo Juduex In Causa Sua” (Latin:- no person can be a Judge, in his/ her own cause).

Section 54 of The Supreme Court Act–Subsidiary Legislation is titled :- “ Grounds For Review”, and it reads:- “The Court may review a decision made or given by it on any of the following grounds :- (a) exceptional circumstances which have resulted in miscarriage of Justice, (b) discovery of new and important matter of evidence, which after the exercise of due diligence, was not within the applicant’s knowledge or could not be produced by him or her, at the time when the decision was given.”

The aforesaid article said that Ya Kumba Jaiteh’s nomination, was revoked by “an executive letter”. This was not the fault of His Excellency The President, because our present 1997 Constitution, does not have any laid down procedure, for revoking the Presidential nomination of a Nominated Member Of The National Assembly. Therefore, if this is part of the reasons, why Judgment in this Case was given in favour of Ms Jaiteh, then this will clearly amount to :- “a miscarriage of Justice”, from the perspective of His Excellency The President. The late veteran Second World War British Prime Minister, The Rt. Honourable Sir Winston Churchill (K.C.M.G.), once said: “Give us the tools, and we will finish the job.” In the same vein, let our Gambian Constitution (the highest law of the land) fairly give His Excellency President Adama Barrow, the necessary Constitutional tools, and he will excellently “finish the job”. He must not be made to suffer, for a monumental deficiency in our 1997 Constitution. I rest my case.