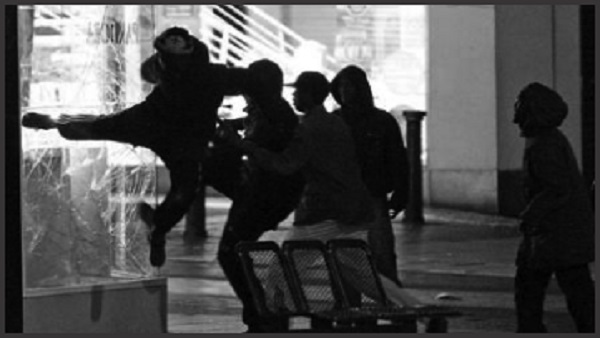 According to the United Nations, the word youth is best described as a period of transition from the dependence of childhood to adulthood’s independence and awareness of our interdependence as members of a community and that a youth is any person between the ages of 15 and 24. Statistics have shown that Gambia has a very youthful population, in fact about 58% of the population are under the age of 25 and 43.9% of youths are unemployed as of 2017. Youths are the building block of any nation and are required to play an active role in development and decision making therefore when a percentage of young people become rebellious and engage in criminal behaviour, it calls for concern.

Recently, we have witnessed a rise in crime and the brutality in which they are carried out is worrying. Judging from the recent arrests by police at various police stations those arrested bythe Police Anti-Crime Unit, most of the suspects are youths. In 2018 so far young people between the ages of 15 and 24 years of age make up 53% of first time offenders convicted for mainly stealing, robbery, house breaking, assaultanddrug related charges. This number excludes those who have been previously convicted, those who could not be prosecuted because of lack of evidence and those who simply got away.

There is a myth that some people are simply born bad. This is why some of these youths are criminal and behave badly. Wrong! There are theories that try to explain youth delinquency and one thing is certain, the young become criminal for various reasons and each delinquent is different from the other. These factors might fall within the realms of psychological (the way our brains are wired), environmental or situational reasons. This means not all youths who commit crimes are bad, some simply do it for survival (the most basic human instinct).Youths are still immature and sometimes make poor judgements; therefore they are prone to making mistakes or committing crimes that are not fully in their control. Researchindicates that delinquencyis often traced back to the following factors:

· Family factors:Research shows that a lot of those young people involved in crime are either from broken families, single parent families, separated families, abusive parents, criminal parents or psychological problems in parents can be the most important reason behind delinquency. Other factors highlighted by researchers were poor housing, large-sized families, personal attitudes which condone anti-social behaviour, sibling rivalry and parenting styles.

· Personal reasons:Sometimes neither parents, family or the neighbourhood have anything to do with why some youths result to crime. Sometimes the adolescent face hardship in life due to some psychological or physical problem that they are going through. This can be as a result of social exclusion. This means that sometimes society excludes or discriminates individuals who do not have similar capacities and abilities that a normal person has. These unequal and unjust attitudes of the society might cause one to result to criminal behaviour regardless of background. Other personal factors are low achievement in school, aggressive behaviour including bullying, lack of commitment to school, hyperactivity/impulsiveness, low intelligence and lack of social commitment.

· Drugs:Drugs are readily available in our society and very common among the youth folk. Drug use may influence the committing of crime.
· Lack of Finances:Young people or adults may lead to a wrong path to improve their financial conditions. A lot of young people result to criminality due to lack of finances or low income. This would explain the statistics of youths being engaged in stealing and selling or taking drugs or embark in the deadly illegal migration (back way). More than a third of Gambians live below the United Nations poverty line which is $1.25 per day with the poorest being women and children. There is high dependency and unemployment among youngsters and pressure to provide for the family.

· Social factors: There can be various social problems like gender discrimination, age discrimination, child labour, peer pressure and the educational system. Dropping out of school, lack of qualifications, being unskilled with no profession or work experience. The act of labelling could also influence continued criminal behaviour. A personis labelled by society once he/she commits a crime. If the offender steals, everyone sees him as a thief so he begins to see himself as a thief. He will repeat similar crime or other crimes in future without feeling any embarrassment in committing them.
· Psychological factors: Mental disability can influence criminal behaviour. A lot of youth offenders who might be mentally unstable or have behavioural problems remain undiagnosed.

We are so often concerned about what crimes they have committed and sometimes filled with so much resentment that we want them prosecuted and punished or simply locked away for good. This averts us from what we should actually be doing, which is finding out the real problem. The causes listed above clearly indicate that we all have a role to play in this growing problem and these people are the products of the society. Let me explain two case studies.

Case one: A boy of 17 arrested and charged for theft. He is a Grade 8 dropout from a poor background;he migrated from the rural area with no appropriate skills to the urban area in search for a better future for himself and his aging parents and siblings who look up to him. He finds himself in the streets of Serekunda with no place to live. He sleeps in the slums or broken downs cars in garages. Basic food and hygiene is a problem. He is an outsider, engages in petty trade and steals to survive and send to his family back home. Turns to drugs and alcohol to numb his emotions of how much of a disgrace and failure he is.

Case 2: A 20 year old boy arrested for drug possession. He is from a good middle class family whose father is quite influential. An intelligent boy judging from the way he speaks. He got into drugs because of peer pressure and stress he says (stress of not travelling to Babylon). He starts to steal and engages in fights to get the attention of his parents so that they can send him to Babylon. This boy has been arrested and detained on numerous occasions.

Obviously the answer is not parading them on national television and prosecution; some of these youths are repeated offenders. However this does not mean they should not be punished for breaking the law. These youths are our sons, daughters, sisters or brothers, mothers or fathers;we should start asking questions like who is he? Where is he from? How did he get to being an offender? What is his punishment? Is he rehabilitated? What is his future? What is society doing? What are you doing?
Before I delve into what I think should be done,I would like to point out that The Gambia is a poor country, and there isn’t enough resources to sufficiently support all of the sectors.

Investments in the reduction, prosecution and rehabilitation of offenders in general will eat deep into the tax payers’ pockets. It is an expensive yet a necessary investment as the welfare of the country depends on it. In my reading into how youth offending can be reduced and averted, I have learnt that youth offending, differ from country to country as do the recommendations. However, one thing is evident; they all require realistic strategic and realisticpreventive and rehabilitative measures that suit the realities of the country in question with the participation of the families, communities, religious institutions, government and NGOs.

To the government, a foundation needs to be set, that is a working paper that provides information such as statistics and analysis concerning youth offenders in the Gambia. This will enable concerned bodies to come up with laws and policies that will help deal with this growing trend. There should be a review of the Criminal Justice System’s treatment of young offenders, juvenile facilities and rehabilitation. Prisons tend to traumatize youths and leave them less able to find employment, have healthy relationships, get an education and lead productive lives. There are so many approaches but to name a few, there should be educational and vocational programmes that enable prisoners to learn and be certificated and given access to counselling whilst in prison. There should be some sort of parole boards that do follow up to released prisoners to ensure that they are well integrated into society.

A review of the educational curriculum, school programs and activities that incorporate programmes promote nationalism, innovation rather than enslave them and make them feel like societal rejects. Government should seek to improve public school conditions so that the schools would be as good as the schools that the Minister of Education sends his or her children. The whole concept of without papers one won’t have a job should be trashed and vocational options be explored and not limited to just catering, sewing, carpentry and welding.

Councils with the help of NGOs, private sectorsshould invest in community recreational centres that promote youth development and leadership. Youths should be able to access services such as counselling, access to people that coach them and offer career advice, extracurricular activities and games were they can interact, engage in friendly competitions (“nawetans”), being engaged in community events and cultural programs to help build a sense of community.

The last but not the least, the citizenry need to stop playing the blame game and expecting government to solve ALL these problems. People need to take responsibility of the role they play towards this problem. Parents also need to raise and discipline their children. I have to admit, the amount of disrespect, carefree and irresponsible behaviour I see amongst youths in general on a daily basis is appalling. Once upon a time disciplining a child used to be everyone’s responsibility; you dare not misbehave in public and not get told off by an adult, but if an adult tries that these days, you get taken to the police by the child’s parents which only helps re-enforce the child’s negative behaviour.

Whilst teaching our children of their rights, responsibilities should not be left out. It is duty of parents to teach their children good morals such as interpersonal skills, respect and consideration for other people and rational thinking. Parents need to be more involved in their child’s lives and activities, be it school, family quality time and the most important communicate.

I have learnt that expecting change without putting in any effort is like waiting for a ship at the airport. It is never going to happen. We should realise that we are social beings, we live within societies and are inter-dependent with each other. Dealing with youth offending should be our collective responsibility starting from the home to the community to the government. We need to build a nation that caters to the needs of the young generation regardless of background or location to ensure hopeful, responsible and productive young patriots that contribute to the development of our beloved country.