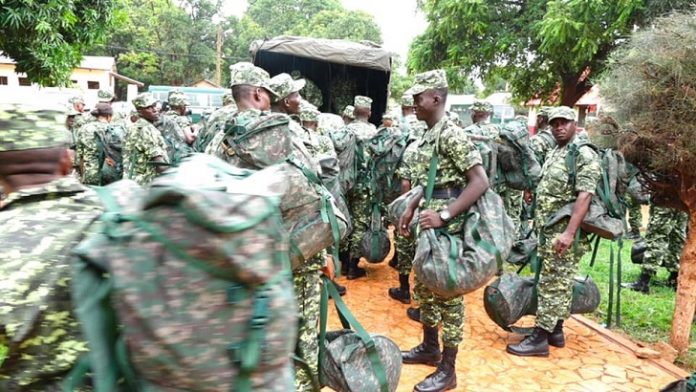 The Chief of Defence Staff, Lieutenant General Masanneh Kinteh yesterday bade farewell to the second batch of New Presidential Guards comprising 150 personnel (including 9 females) who were leaving for Dakar, Senegal to undergo three months of training.

The contingent, which includes one hundred and fifteen (115) soldiers and thirty-five (35) members of the Police Intervention Unit (PIU), is led by Major Ousman Bah.

The presidential guard is an elite unit that is being formed charged with providing security to the president and the State House.

The unit consists mostly of soldiers but also police and intelligence officers.

Speaking at the farewell ceremony at the Fajara Barracks, CDS Kinteh said: “This journey started over two years ago when there was a peaceful change of government in this country for the first time, and there was a need to be able to reconstitute the presidential guard that will be there to serve the interest of the people of this country.

One of the first moves undertaken by the new administration is to ensure that the former presidential guard that was used by the previous regime with some elements used to abuse and violate the human rights of the people of this country be reformed in the armed forces.

Therefore, there was a need to be able to reconstitute the State Guard Battalion,” he added.

CDS Kinteh said this new development means that the security reform is going on.

“It may seem to be slow but it certainly going on going,” he said.