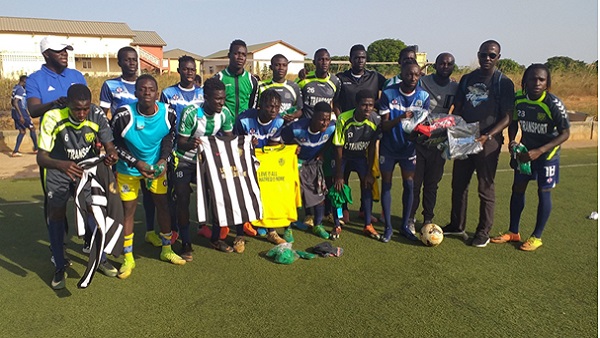 Africa Aid International, a charity set up to support sports development and education, last week donated sets of jerseys to Bakau Komani FC, leaving them very elevated.
The charity is the brainchild of US-Based Gambian Abdullah Dibba, one Lamin Colley and few friends.

“We realised that our youths have a lot of talent but they don’t have the very basic things to develop,” Mr Dibba told journalists at the presentation.
He lamented that not much has been invested in sports and education in The Gambia noting that Africa Aid would now serve as a bridge for those international organisations to bring resources here for people in need. “Our dream is to go beyond the borders of The Gambia,” he added.

He thanked their US-based partner organisation in Los Angeles and the Ahmadiyya Muslim Youth FC, a football team in the UK, for their benevolence which would inspire and motivate the youths.

The charity collaborated with Omar Jack Jagne, a former Gambian footballer, to present the materials.
Jagne praised Africa Aid International for the donation, saying he himself has been donating yearly to the Bakau boys.

He spoke of the talent in youth saying all what was needed is motivation.
FaizanWarraich of Ahmadiyya Muslim Youth Football Club, also made similar remarks.
Lamin Jammeh, Africa Aid International Gambia coordinator, disclosed that plans are afoot to take projects to the country-side and support rural students with bicycles, pumping machines for women farmers and other basic necessities.