Africa has problem of leadership – minister 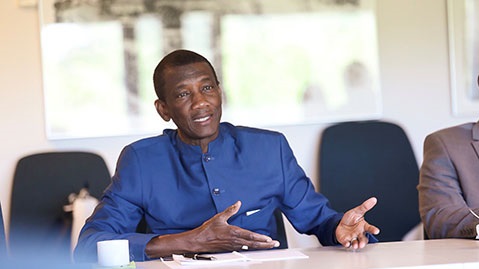 The Minister for Higher Education, Research, Science & Technology, Badara Joof has said that a major problem undermining Africa’s quest for sustainable development is the problem of leadership and governance.
The minister was speaking at the inauguration of a Technical and Vocational Education and Training (TVET) committee established under his ministry to lead the road map design and implementation process of a comprehensive TVET policy that responds to the needs of the Gambian labour market.

Mr Joof expressed dismay over the failures of many ‘retail TVET projects over the past’ and called for a complete transformative overhaul of the system to re-engineer TVET into a way that creates a sustainable dynamism in the education sector.
“We have been talking about food security since I was going to school, with all those projects like RDP and all sorts of other projects but up to today, we cannot have food security in rice. What is wrong with us? There seems to be a conflict between policy and practice, between program and propaganda. The politicians come and convince us with all big words and big promises and they break all of them,” Joof said.

According to Minister Joof, it does not ‘only become a moral duty to say the truth but a pleasure that helps you live with your conscience.
“There is a problem of leadership in Africa. Politicians come, promise people and end up becoming richer than the state. I will say this loud and clear and I have been saying it, you the technicians have to get it right and do not play to the gallery; that is the only thing,” the minister added.

He said the continent should learn from developed industrialised nations to build strong institutions that transcend individual interests to a national characteristic.
“I have a very radical view of the entire issue; transformative change comes with overhauling an entire system. Since I was going to school we were talking about TVET and it has always been in this spaghetti type of retail projects where it comes and scattered all over and the end of the project everything ends with no optimal impact.”

He said the committee should work to harness initiatives towards a comprehensive institutionalised national program built into the institutions like MDI and GTTI rather than individuals to develop an entrepreneurial citizenry that has a pedigree, tradition and culture of entrepreneurship for its own momentum and impetus.

Joof, a former education specialist for the World Bank called for a radical transformation and complete overhaul of system and the mindsets.
He said ‘some people are resistant to change and others are afraid of the change because of the unknown but to make omelet you have to break some eggs and we have to move forward.’

He said TVET is at the forefront of development and the country only have to get it right to industrialise and make transformative socio economic changes that affect the young people.