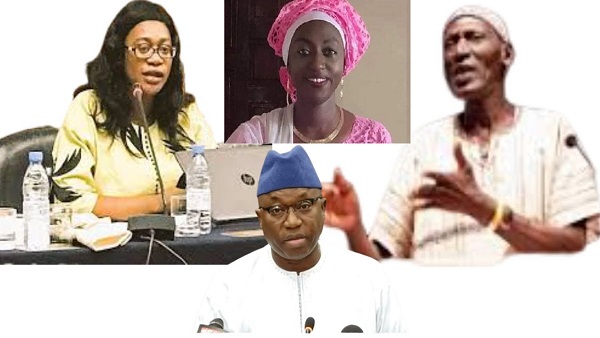 Members of the National Assembly have bitterly criticised the budget virement process instituted by the government to help contain the coronavirus pandemic.

The government announced a D500 million emergency fund and a D734 million food support from this year’s approved D21 billion budget to fight the coronavirus pandemic, but lawmakers on finance and public account committee described the decision as “illegal” in the absence of a parliamentary approval.

Sidia Jatta, Fatoumatta Njai and Ya Kumba Jaiteh all argued that the minister of finance did not have virement powers to transfer funds from one public account to the other without the approval of the National Assembly who approved the original appropriation bill.

Jatta accused the minister of contempt since he has been butchering the approved budget without the approval of the assembly, even when the illegality of the process was made clear to him during engagement with lawmakers.

“It is the position of the law that I am defending.You do not have the authority to do a virement because technically it was the parliament which decided on these laws and to change it you must come back to parliament to seek authority but you failed to do that and that is why I said you are in contempt of the parliament because we made it clear to you in our last meeting. It is not that we are opposed to expenditure on Covid-19, in fact for us the expenditure is too late but you insisted and went ahead to do something that is even worse than the first process,” Sidia added.

The Member for Banjul South Fatoumatta Njai said: “The ministry of finance is in contempt of what the National Assembly has approved and I think it’s about time we started enforcing strict penalties to ensure everybody adheres to the rules because this committee has powers as the high court.”

Njai said the funds are charged in particular departments according to the appropriation bill and removing them to another public account without the authority of the National Assembly is a flout of the law.

She urged lawmakers to look into the matter for a proper penalty to apply on the minister because he cannot sit in his corner and start viring money without the authority of the parliament and those supervising agencies.

Nominated National Assembly member Ya-Kumba Jaiteh also added her voice. She said the assembly did not only appropriate D21 billion for the executive to do whatever they want without following due process.

“When we appropriate, there is a reason why we go through the budget line by line and that whole purpose would be defeated if you have powers to do whatever you want with the money. We appropriate for a specific purpose for the services required so if you want to change it you must come to us for approval,” Jaiteh said.

In response, Finance minister Mambury Njie said it is his ministry’s interpretation that virement is legal and justified as guided by the Public Finance Act.
He said the government is responding to an emergency situation, adding that re-allocating funds is within his ministry’s mandate and authority.

“We stand by what we did and we are convinced that it is the right thing to do. We felt in our own interpretation that it is a normal procedure as long as we are not going to hit the ceiling to make extra budgetary expenses and up to today, we have not spent anything beyond the budget appropriated in December,” the Minister said.