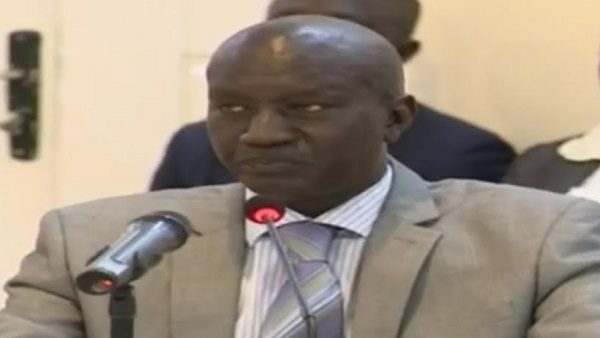 A report by the International Audit Department of The Gambia Government obtained by The Standard has strongly indicted the former management of the Gambia Public Procurement Agency GPPA led by former MD Tumbul Danso.
Among a catalogue of irregular spendings, the auditors said they discovered that Mr Danso allegedly used his institution’s money to pay a hotel bill for his private guest at the tune of D183, 231 at Sarge Hotel.

The findings, contained in the audit report of the GPPA covering 2014 to 2017 has been completed and submitted to the Office of the President, Ministry of Finance, National Audit Office, Director of Budget and National Assembly oversight committees since October 2018.
The GPPA currently does not have a board but the Finance Ministry which oversees the institution could act on auditor’s recommendations.

But when the The Standard contacted the Permanent Secretary Of Finance Mod Secka he said he only saw the audit report on March 8, the day he was visited by The Standard, even though the trail of the documents indicated his ministry received the report since October 2018. Mr Secka only moved to the job in January 2019 meaning the report arrived there during the time of his predecessor Modou Ceesay.

In their response to the audit findings, the management of GPPA said “measures to recover this money has already been instituted through monthly deductions from the social security benefits of the former Director General”.
The auditors went on to confirm that money was being deducted from Danso’s social security benefit but no legal action was taken.

But in an interview, PS Secka, told The Standard that when they receive audit findings, and there happens to be allegations of theft, they involve the police. Though he would not comment on the substance of the report since he claimed he did not read it, Secka said they stand committed to addressing the issues raised in it.

Meanwhile, the auditors further reported that former GPPA MD Danso had also allocated himself D94, 000 worth of fuel every month amounting to D1, 128, 000 a year, which The Standard understand is three times more that what a cabinet ministers gets.
“The audit team find it very difficult to comprehend the reasoning behind this allocation and therefore deem it non genuine,” the auditors commented in their report.
However, according to the new director general Abdoulie Tambadou, this practice has been corrected by the new management.

Tambadou who would not comment on the audit findings boasted into laughter when The Standard asked if his monthly expenditure gets to D94, 000 like his predecessor. “No, it is not that high”, he replied.
Also on fuel, the auditors also reported that Danso had also allocated D10, 000 worth of fuel every month to the board chairman, one Ebrima Dondeh.

The auditors said this act risks “wastage and misappropriation of public funds on the board chairman who is not involved in the daily operations of the authority”. According to the auditors, an imprest amounting to D14, 625 was also spent by Danso on his trip to Ghana without adequate supporting documents to show how the impress was retired.
The auditors further claimed that Danso reportedly donated D15, 000 of GPPA funds at his own discretion to his namesake. According to the management, these funds were from an ‘Approved Budget Provision’ for donations to groups/individuals and for other corporate social activities.

“The auditors discredit and strongly refute the management’s response of budget provision for donations to namesakes as part of corporate social activities,” their report said. The auditors said this, like many other individual donations made at the discretion of the former Managing Director is a waste of public funds and a bad public reputation of the institution and the funds should be recovered immediately.

Conflict of interest
Other findings in the report include what auditors considered as a suspicious business dealing between a company partly own by Danso and the company he was serving as director general, GPPA.
According to the auditors, Sami Estate which is found to be owned by Danso and managed by his wife has

business dealings with GPPA worth over one million dalasi.
According to the auditors, this business relationship was initiated by Danso between a property company where he owns 30% and a public institution he serves as director. Auditors said Danso neither disclosed his relations with Sami Estate to GPPA nor could they have found evidences that he involved the board in the process.
The auditors were informed that Sami Estates is a registered company with shareholders among which T.K Design Associates, an architectural firm owned by Danso, owns 30% shares.

The auditors said there is a “risk” that entering into contracts with Sami Estate may not be in the “interest of GPPA”.
“We noted during the review that an investment was done by GPPA to acquire a land from Sami Estate (G) Ltd at Kombo Kerewan measuring 30mx 50m (equivalent to 4 plots measuring 15m x 25m), in the sum of D 275,000.00 per plot, totaling D1, 100, 000 without any evidence of the involvement of the board of directors,” stated the Internal Audit Department.

“Full payment of the cost of the land had been effected since January 2016 but there is also no documentary evidence of transfer of ownership of the land to GPPA. As the investment was said to be commercial, there is no evidence that the acquired land has been sold at a profit and capital cost recouped,” the report stated.
The auditors also indicated that D265, 000 was spent on the purchase of a motor vehicle by Danso without the right procurement method being followed.

The auditors further indicated that the vehicle was “valued by garages that are not considered experts as far as valuation is concerned”.
“There is a risk of non-compliance to GPPA regulation and Act, thus undermining the Procurement Authority’s responsibility to oversee the procurements of public institutions, said auditors.

Section 1003, dealing with Medical treatment for dependents, also states that “the spouse and biological children of an employee registered under the medical scheme may receive treatment as per the terms and conditions of the medical scheme”.
However, the auditors have found out that, in contradiction to the provisions of the service rule, the GPPA’s medical insurance scheme was not limited to biological dependents.
The current management however corrected this anomaly, which brought the institution’s yearly medical expenses budget to D2, 500,000.

GPPA is the public institution legally mandated for scrutinizing public expenditures to ensure that value for money is attained. An estimated 60% of Gambia’s annual budget, about 7 billion, goes into procurement, according to officials.
However, according to auditors over D300 million worth of such procurements had been green-lighted by the GPPA without any scrutiny from 2014 to 2017.
The Standard contacted Mr Tumbul Danso against whom the allegations were made but he said he could not comment on the audit findings.

On Thursday, March 07, Danso told The Standard that he could not talk about the audit findings until it is “finalized”. This medium contacted Danso again on April 7, yesterday for a “right of reply” but he reiterated his position not to comment on the issue for now.
The Standard will publish audit reports on other institutions in subsequent editions.