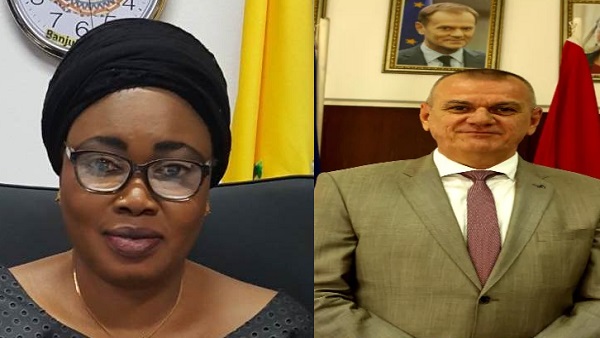 The European Union pledged 150 million dalasi to the Banjul City Council, BCC yesterday to support the development programmes of the city for the next three years.

The grant support was confirmed at a signing ceremony attended by the EU Ambassador to the Gambia Attila Lajos and Mayor Rohey Lowe and other senior officials of the Council.

It comes barely months after the launch of a major construction projects for the rehabilitation and construction of the city’s drainage, sewage and roads systems.

Mayor Lowe said the support was realised through the fruitful partnership between the BCC and Oostende Council of Sweden where she served as a nominated councillor.

It is the first time a local government authority directly benefits from an EU funded project.

According to the Mayor, the funds will cover key corporative areas mapped by the council for the future development of the city.

“Facilitating the implementation of good governance, enabling the creation of sustainable development centre in Crab Island, supporting a more effective environmental friendly waste management, provision of sustainable drainage systems, as well as increase access to health care and hygiene services amongst others”

The Mayor disclosed that as part of the three-year partnership, the BCC is contributing 7805 Euros and 150 thousand euros from the Oostende Council in Sweden.

Attila Lajos described the project as a living dream for the city stating that it would positively transform the lives of Banjulians to help address challenges associated with the development of the city.

He said the EU is thrilled to be associated with the initiative in consideration of the mayor’s developmental achievements, describing her as a leader with a vision to serve the people.

Lajos disclosed that the project was selected out of hundreds of proposals from other municipalities across the continent, adding that it is to bring tangible improvements in the lives of the people in Banjul and the country at large.