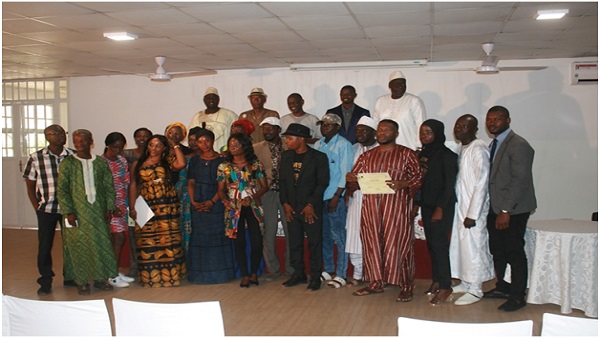 National Centre for Arts and Culture, NCAC selected five Gambian youth entrepreneurs who participated in a three-month entrepreneurship training programme to support the implementation of their project plans for the next two years.

The entrepreneurs were selected from a Unesco-funded entrepreneurship training programme in support of the culture and creative industry of The Gambia, which ended on Wednesday at the Gambia Tourism and Hospitality Institute, GTHI in Kanifing.

The project aims to provide practical assistance on a range of entrepreneurial skills, knowledge, and business plans to help those seeking to enter or progress as self-employed entrepreneurs in the creative industry.

The training targeted 25 Gambian youths from the creative sector including music, film, literary art, and fashion.

Ya Awa Conateh (Yaws), Kebba Forster, Fatou Fatty, Michael Hamadi Secka, and Isatou Jallow were selected, after their works were viewed as the five best-written and most promising plans out of 25 others who participated in the training and sent their plans before a panel of judges.

The five would now be supported by the NCAC as pacesetters for the creative industry of The Gambia.

The deputy permanent secretary at the Ministry of Tourism and Culture, Sutay Jawo, said government has placed “great importance” on the development of the creative industry, which employs about 1 percent of the world’s active population generating 29.5 million jobs.

He added that the Ministry would continue to create the enabling environment to support the industry and youth development to address the most pressing needs of the creative sector.

Touray who served as secretary of the Olympic Committee, chairperson of the UTG board, Zenith Bank, vice president for commonwealth Games in Africa and the president of the American Chamber of Commerce Gambia, observed that Gambians have a problem of “celebrating and taking pride in their own”.

He called on the young entrepreneurs to “cross the barriers in breaking the fear of initiating their own businesses”.

He said as entrepreneurs they have a critical role to create and add value to everything in human endeavour.

The director of creative and performing arts, NCAC, Sheikh Omar Jallow, thanked the country’s national commission for Unesco for supporting the initiative, and reiterated NCAC’s resolve to delivering immediate gains to the creative sector for the betterment of the county’s youthful population.