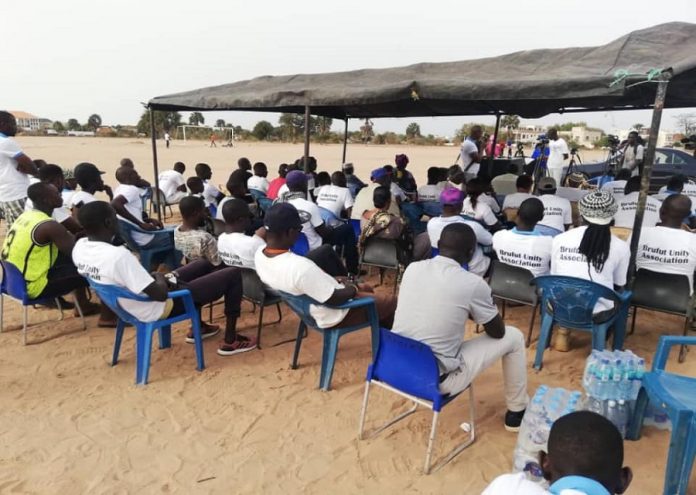 The people of Brufut on Saturday called a press conference organized under the auspices of the Brufut Unity Association, an umbrella body of various groups in the town to reaffirm their common resolve to protect its multi-purpose sports center from any forces.
Situated right by the highway at the entrance of the Brufut Heights, the empty land which was first said to be a Tourism Development Area, TDA, was grabbed by former President Jammeh and leased to Kanilai Farm years after the Jammeh regime sold 75 percent of the area to private home owners, despite it being designated as TDA. It has however been used as a football field long before the land grabbing started and the youths want it to remain as such.

With the advent of the new regime and the recommendation of the Janneh commission for all community lands to return to the communities, the Brufut sports committee and other groups in the town have come together to demand that the land be maintained as recreation centre as designed.

Members of the community are angry by a recent statement by official of Physical Planning and PS Buba Sanyang of the Ministry of Lands who said the youths have no permit or document entitling them to the land which the youths feared could be the next target for demolition by Physical Planning. PS Sanyang also said the fate of the said land is currently a subject of a ministerial task force which will send recommendations to cabinet to decide the fate of the land.

However Abass Manneh, head of the group working to recover lands taken from the community by former president Jammeh and his government warned that any such attempt to take the land from the youths will bring a serious conflict because Brufut will never allow that land to be taken by any forces.

The flag-bearer of the Gambia Action Party GPA, Gen. Lamin Bojang himself, a native of Brufut said the government will gravely miscalculate the resolve of the people if they intend to attack the place for demolition. “The community have exercised restraint and have engaged the government through its ministry of Lands on this matter. To say that the youths have no documents for the land lacks substance because it should be the authorities which should give them documents to use it for the interest of the entire community and not for selfish purposes,” he advised.
Others including Village Development Committee Chairman Pa Lamin Fatty expressed similar sentiments.

GNOC ELECTIVE CONGRESS ON HOLD TILL AFTER OLYMPIC GAMES

The elective congress of the Gambia National Olympic Committee, GNOC, expected to take place this year, will now be held after the Olympic Games...
Read more
Sports

As the Scorpions set out for camping in Portugal, their toughest rival in the Afcon qualifiers Gabon, has set up a friendly  against Benin...
Read more
- Advertisment -