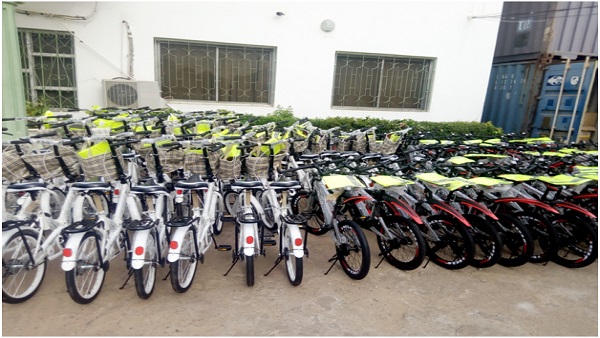 The bikes which have reflective jackets with hand bags attached – were distributed to Foni Ding Ding and Ding Ding Yiriwa Federations and to schools in LRRand CRR, respectively.
Musu Kuta Komma-Bah, the fund’s national director, had expressed her dismay at the “countless children in communities” in The Gambia who trek long distances to get to school. She contended that it does not portend well for the pursuit of quality education as it can lead to fatigue, lateness and loss of vital contact hours needed in the academic year.
The ‘Dream Bikes’ as they are called, have already brought about improved grades in schools as children now arrive on time for classes, she added.

She added that the fund remains committed to helping deprived, excluded and vulnerable children have the capacity to improve their lives and the opportunity to become young adults and leaders who bring lasting and positive change in their communities.
Amie Colleh Mbye, an official of the fund, said ChildFund has done a lot to enhance quality education in The Gambia.

Speaking at their office in Kanifing, she said the bikes should not be seen as a luxury for the children but used to enhance their attendance, punctuality and retention in school. She added that the pupils should be taught on h ow to care for them.
Marabatou Badjie,a senior education officer, thanked ChildFund for the gesture, noting: “If you contribute to education, you contribute to the lives of everybody in a country. ChildFund is a household name here.”

A beneficiary who spoke on behalf of her fellow pupils, noted: “Now, we will be able to arrive at school on time and go back home early, and have enough time to rest and play with our friends.”