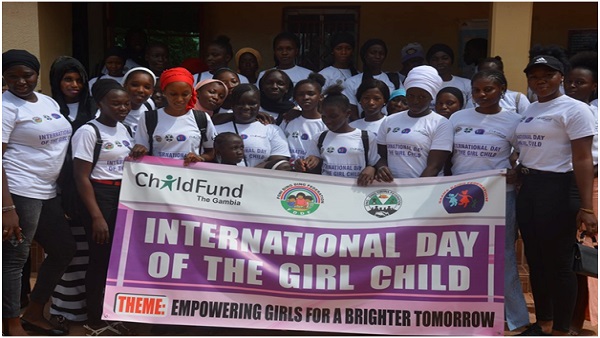 ChildFund The Gambia recently joined the rest of the globe to observe International Day of the Girl Child.

Celebrations marking the event were staged at the West Coast governor’s office, with other organisations such as Foni Ding Ding, Ding Ding Yiriwa and Saama Kairo federations also taking part under the theme empowering girls for a brighter future.

The day aims to highlight and address the needs and challenges girls face, while promoting girls’ empowerment and the fulfillment of their human rights.
Representing the governor, Fabakary Sanneh called for greater investment in girls’ plight in order to give them the future they deserve.

Alieu Marr, who spoke on behalf of ChildFund Country director, gave a synopsis of the history of ChildFund, which was founded some 35 years ago, and that it has been campaigning for the well-being of the girl child.
He pointed out that girls face so many challenges around the world, particularly in The Gambia.

“This occasion is to educate the public on issues of concern, and to mobilise political will and resources to address global problems affecting girls and women at large,” he stated.
He gave specific details on some of the issues girls are faced with in our communities.
He said: “Girls are breaking boundaries and barriers posed by stereotypes, including those directed at children with disabilities and those living in marginalised communities.”

Safe Hands for Girls coordinator, Lisa Camara, said the significance of International Day of the Girl Child is to raise awareness of the Beijing Declaration and Platform for Action, which is considered the most progressive blueprint ever for advancing women’s rights.
“Today, I challenge all of you to inspire a campaign in promoting girls human rights and join global efforts in ensuring that the world is discrimination free for girls,” she challenged the audience.

Isatou Jallow, the coordinator of Girls Agenda, brought attention to other challenges girls are faced with which hinder their dreams and aspirations. She said these include child marriage, sexual violations, gender-based violence and FGM.

“I therefore call on the government to ensure that laws against gender-based violence, child marriage and FGM are given due implementation, and not just beautified in our offices, allowing culprits of these human rights violations go scot-free in our society,” she demanded.