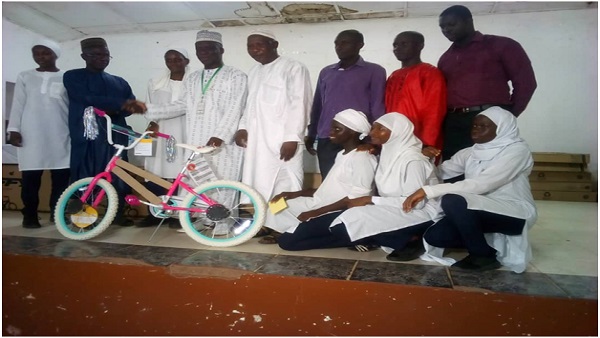 A former student has remembered his alma mater, Nusrat Senior Secondary School, by donating to it more than a 1000 bicycles for its students.

US-based Gambian Lang Dibba said the bicycles cost him over 4 million dalasi, and that they are for use by needy students of his former school and other schools as well.
At a ceremony at the Nusrat School campus, it was announced that regions 2, 3, 4, 5 and 6 will also receive their shares of the bicycles.

The School’s Principal Karamo Bojang expressed delight with the gesture, and promised the bikes will be distributed accordingly among needy students across the country.
He said: “We are proud to associate ourselves with Lang Dibba, because he was part of us. Some of our brothers and sisters in the rural areas find it very difficult to reach to their various schools.”

The principal lauds Lang for his earlier donation when he sent two containers of books through his Million Books for Africa initiative.
He returned gratitude to him and also praised the basic education ministry for helping to lift duty on the bicycles.

Musa Mendy, a retired senior education officer, said: “Because of his [Lang’s] love and enthusiasm for The Gambia, this is one of his initiatives including his other project called Million Books for Africa which is not only geared towards providing support for Gambia, but the whole continent at large.”
He said the donation will address the issue of late arrival of students to schools.
He then urged the beneficiaries to make the best use of the bicycles.

Adama Jimba Jobe, a deputy parmenant secretary at the Ministry of Basic and Secondary Education, called the donation “doing a great job for the government”.
“It was only just recently when we held a meeting to discuss some of the challenges facing students, especially those who trek kilometers to go to school.”