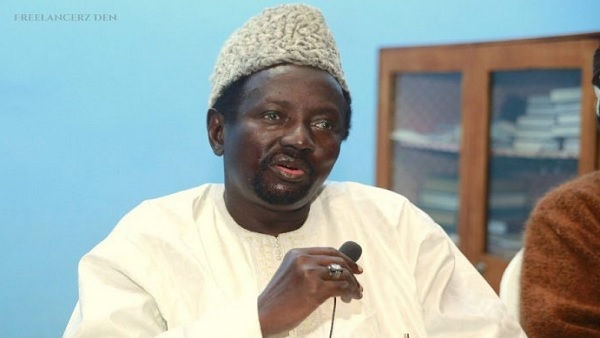 The Amir of the Ahmadiyya Muslim Jama’at in The Gambia has described the Covid-19 outbreak as a global crisis of monumental proportion, which put vulnerable populations at great risk and needing help.

Amir Baba F Trawally made this assertion on Wednesday at the office of the governor of West Coast Region as the Ahmadiyya Muslim Jama’at’s distribution of food aid reached one of the country’s most densely-populated local government areas.

For more than two weeks, the Jama’at was involved in a national food aid distribution of hundreds of bags of sugar, onions, rice and hundreds of litres of cooking oil to the various local government authorities for further delivery to theneedy in their regions.

On Wednesday, the Jama’at donated 140 bags of rice, 70 bags of onions, 28 bags of sugar and 140 l litres of cooking oil to the office of the governor of West Coast Region for onward distribution to some needy families in the region as well as victims of the recent Brikama market inferno.

The donations were part of the Jama’at’s Ramadan and Covid-19 relief interventions.
Amir Trawally, in his remarks during a brief ceremony to hand over the items to the governor of West Coast Region, acknowledged that Covid-19 has helped The Gambia to unite in purpose and work in solidarity in trying to lessen the negative impacts of the virus on the population.

“It is a time for national unity so that the poor, weak and the needy could be accepted. Covid-19 has an impact on us [The Gambia] and not only us but the entire world as well. It is a global crisis and everyone is affected. This is the best time for solidarity and unity and these are already existing in The Gambia because Gambians are a very generous people. We should come together as one family; Muslims and Christians alike to assist,” he pointed out.

Amir Trawally also underscored the need to seek divine intervention in the face of the Covid-19 crisis.
He added:“We should go further to pray. You see, this world is controlled by Allah; the Almighty, the Creator of man and woman and the universe. So therefore, everything is under His control. He is most powerful, all-seeing and all-hearing. Therefore, I think we should always subdue to Him to increase our sacrifices and endeavours on the side of the Almighty so that we can have mercy, forgiveness, salvation… from him because if we are obedient to the commands of Allah, He will forgive us. Some of these disasters can be averted and therefore we should submit to the will of Allah.”

He enjoined all to emulate Prophet Muhammad in his interactions with Muslims and non-Muslims both in peace time and in disasters.
“Every human being should be helped. And this is what the Ahmadiyya Muslim Jama’at is doing. The Prophet Muhammad (SAW) had extended his hands to Muslims and non-Muslims alike; Christians, Jews… As Muslims, we should emulate and we should also help our neighbours. Victims are helpless people. You know what happened in Brikama[market fire]. It was a tragedy. Most of them, the fire consumed all their property. Therefore, they are helpless. Money, rice and other property were destroyed. So, those who are able to come forward and assist should do that. This is why Ahmadiyya Muslim Jama’at came today to assist these people. To assist the poor and needy is not a privilege at all because the Holy Prophet Muhammad (SAW) advised us to help. So, let us all come out to assist. It is not a privilege but a right for the poor, weak and the needy to be assisted. As far as Islam is concerned, we need to share,” he stated.

The Amir finally thanked the Supreme Spiritual Head of the world-wide Ahmadiyya Muslim Jama’at for approving the food aid distributions to all the regions of The Gambia. The Caliph, he went on, has always approved of this kind of assistance not only to The Gambia but the entire humanity. Amir also revealed that the Caliph is genuinely concerned about the impacts of Covid-19 on The Gambia and had sought to be briefed about the situation on daily basis. “He is concerned and is always praying for everyone,” the Amir said of the Supreme Spiritual Head of the Jama’at.

Amir Trawally also praised the efforts of the Humanity First, International Association of Ahmadi Architects and Engineers as well as Magilis Ghulamun Ahmadiyya for jointly assisting in the food aid drive.

Meanwhile the Governor of West Coast Region, Lamin Sanneh, in his remarks said he was delighted to receive a delegation from the Ahmadiyya Muslim Jama’at in The Gambia at his office for the food aid distribution.

“I’m really delighted this afternoon to receive the Ahmadiyya Muslim Jama’at in this office with a big delegation and a big food aid package. Ahmadiyya Muslim Jama’at is a household name[in this country] when it comes to humanitarian assistance. Since last week, I’ve been following the developments…the humanitarian works you’ve been doing. You care for the needs of the people. The Gambia is among Third World countries; meaning not everyone can get three meals a day and therefore anyone who supplements, is good.”
According to governor Sanneh, the support that the Jama’at rendered to the victims of the Brikama market inferno is very significant in that the market attracts nationals of almost all the countries of the West Africa sub-region.

“And they have all suffered in this fire disaster. This donation will help reduce their trauma and we’re quite happy. I want to assure that the items would reach the intended beneficiaries. We, as Gambians and people of West Coast Region, want to appeal to everyone to emulate the Ahmadiyya Muslim Jama’at,” governor Sanneh concluded.

The Gambia yesterday registered a new Coronavirus case, making the total number of cases to 26. According to the health ministry, the new confirmed case...
Read more
News

The US ambassador to The Gambia, has spoken on the death of the African American George Floyd at the hands of police, the universal...
Read more
News

By Omar Bah The Ministry of Lands is planning to continue with the demolition of properties it said are built on illegally appropriated land. Speaking at...
Read more
- Advertisment -