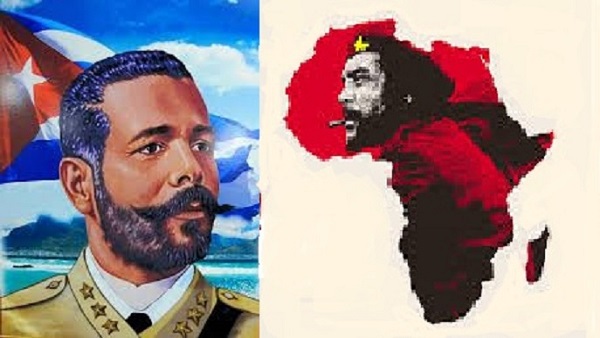 Every June 14th Cuba commemorates the birth of two of its greatest heroes, Major General Antonio Maceo Grajales and Commander Ernesto Che Guevara, who for their struggles for independence, anti-imperialism and against racism, twinned the largest of the Antilles with Africa forever.

Maceo, a cuban mestizo descendant of Africans who fought against Spanish colonialism on the Caribbean island in the 19th century, and Che, an Argentine-Cuban who did it against neocolonialism on this continent a century later, they were born by coincidences of life just the same day.

Both, without a doubt, represent everlasting symbols that intertwine the history of Cuba and that of Africa because they planted the seed of mutual solidarity, today turned into huge leafy trees thanks to thousands of men who, together with them, shed their blood for the sovereignty of its towns on one side and the other of the Atlantic Ocean.

The Bronze Titan, as Maceo was called because of his courage, bravery, and physical strength, represents thousands of slaves and their descendants who fought in the Antillean nation’s libertarian wars, after snatching them from their native lands to be exploited in America and other parts.

Che, who is known throughout the world as the Heroic Guerrilla fighter also because of his daring, bravery and persistence, personifies the Cubans who fought and gave their lives in the struggles for the independence of this continent.
In addition to being born on the same day, although in different centuries, life wanted both men, strategists and notable thinkers, to coincide in their emancipatory ideas and against exploitation of the most dispossessed.

They were anti-colonialists, anti-imperialists, intransigent against racism and tireless soldiers until their deaths in combat.
His enemies then trembled when they heard their names, and today they continue to be feared because their ideas endure and spread everywhere.
Maceo and Che, walk among the millions of young Cubans, Africans and from all regions of the earth planet that today cry out for a better world, in peace, in solidarity, without racist violence, the spoliation of nations and imperial domination.

They live in the hearts of new generations of brave, titans and peaceful heroic guerrillas, such as Cuban health workers, who heal and save lives in many countries, in the midst of Covid-19, the worst pandemic that has ever plagued humanity.

Rubén G. Abelenda is the Cuban Ambassador to The Gambia

By Babucarr Gaye The Sisters Show quickly set itself apart from other shows when it came onto the scene a few months ago. It's the...
Read more
View Point

By Ndey Kumba Demba It came like one of those light-bulb moments and with a clarity I haven't felt in a long time. I almost...
Read more
- Advertisment -