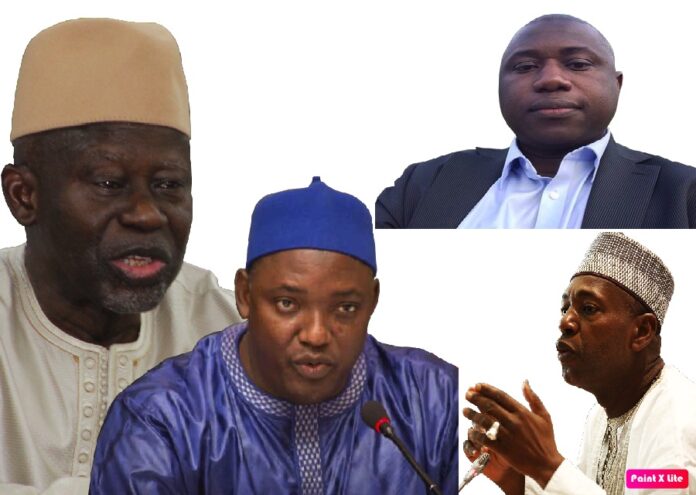 Ousainu Darboe, leader of the United Democratic Party, has challenged President Adama Barrow and his entire cabinet to resign over the rejection of the draft constitution.

“If they have any conscience knowing that this is a major policy and it has failed, they should resign. Anywhere in the world when governments fail in a major policy, they resign. That is what decent governments do. I would have expected Barrow to do the same,” Darboe told journalists yesterday at a press conference.

He said Barrow should explain to the Gambian people why he allowed D116 million to be spent on the draft when he knew he was going to mastermind its rejection.

“The planned rejection of the draft constitution is by all indications proving the current government’s refusal to deliver to the expectation of the Gambian people and its failure to fulfil its promise of reforms. The Barrow administration has not just failed to lead our country through a transition to more democratic dispensation but it has equally snatched away from the citizens of this country the right to express themselves democratically as clearly stipulated in the 1997 constitution. This government has failed in its duty to prioritise the interest of the citizenry and must be held accountable for their actions which led to the rejection of the constitutional reform process,” he said.

He said the colossal failure of the Barrow administration is evident that they have lost the trust and confidence of Gambians and should resign.

Darboe further argued that the rejection of the draft constitution doesn’t in anyway represent the majority will of Gambians. “Therefore, I will like to call on all other political party leaders, CSOs and other stakeholders to add their voices to the demand for answers and hold the government including the Attorney General who failed to defend the bill to the best of his ability, accountable.”

“The rejection of the constitution by few individuals has totally disregarded public and national interest and has taken from us the opportunity to usher in a new Gambia we all yearn for back in December 2016 when we took to the polls to end dictatorship,” he added.

The former vice president, himself a lawyer, also registered his disappointment over the Justice Minister’s lack of interest to defend the draft before lawmakers.

“It was especially disappointing to see the Attorney General essentially abandoned the legislation to NAMs and project indifference to the passing of a bill that he himself tabled. He didn’t advance any convincing argument to persuade lawmakers to support the bill. His performance and the conduct of the entire executive branch betrayed the expressions of the overwhelming majority of Gambians who have taken the time and effort to shape a progressive and forward-looking constitution,” he added.

He said the country’s aspirations and hope for a democratically progressive nation have been killed and the change “we voted for has been crushed by the same leadership we collectively entrusted our power to.”

Darboe likened the rejection of the draft to the 22 July 1994 military coup, adding “it will go down in Gambian history as a day of great betrayal by a minority of people who are either ethically compromised or motivated by narrow sentiments from defending the values of our collective salvation.”

He said the Justice Minister went to the parliament “to do exactly what the president and his cabinet told him to do. That is to say leave it to them – don’t explain anything to them and don’t try to convince anybody. I wish Ba Tambadou was here; he had passion for this constitution and if he was there, he would have defended it.”

He thanked the UDP NAMs and other parliamentarians who voted for the bill for their demonstration of patriotism.

“To those NAMs who took to the floor jabbing fingers threatening and ultimately scuttling the people’s draft constitution because it didn’t meet their personal and subjective criteria must know that you will live the verdict of history. They must also know that by the will of Allah this draft bill and the ideas it encompasses will not die with their votes,” he argued.

The UDP leader added: “To mastermind the defeat of a draft constitution that cost D116 million to the wishes and objection of few NAMs substituting their personal views over the greater good is an outrage.  It is a demonstration of contempt for the Gambian people by a wayward administration and its supporters.”

He said a UDP government in 2022 will reintroduce a constitutional bill in parliament and ensure its success as that is the will of the majority of the Gambian people.

Darboe concluded “with the simple majority as provided in the 1997 constitution, the UDP will beat Barrow in the 2021 presidential election.”