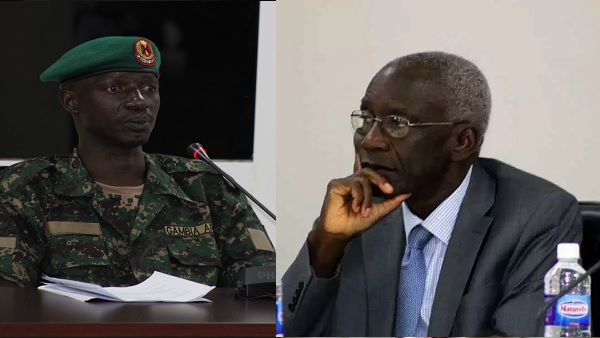 Apparently touched by the recent revelations before his commission, TRRC Chairman Dr. Lamin Sise has said the stories of multiple killings by strangulations and dumping of bodies in wells are making Gambians live through hell. The chairman likened the Junglers to Hitler’s henchmen or the Janjaweed of Sudan.

“And we have not heard all as more witnesses are lined up,” Sise said.

The latest he heard yesterday was from Pa Ousman Sanneh, a member of the ex-president Jammeh’s notorious hit squad who again suggested that the multiple killings he participated in could only have been sanctioned by former President Jammeh.

Sanneh, 41, commonly known as Pa, joined the Gambia army in 1991 and participated in the July 1994 coup that brought Jammeh to power.

He confessed being part of the Junglers who smuggled themselves through the gate and junking over the fence dead in the night to strangle former APRC majority leader Baba Jobe on his hospital bed.

The Jungler also admitted participating or witnessing the killing of Gambian-Americans Mamut Ceesay and Ebou Jobe, as well as Abdoulie Gaye, and one soldier and Tumani Jallow.

He said the two Gambians were accused of planning to oust former president Jammeh who subsequently ordered the team to “kill and chop” their bodies into pieces.

Tumani was allegedly accused of taking part in the burning of the APRC bureau in Kanifing in 2016.

According to Sanneh, Sheikh Omar Jeng the former director of operations of the former National Intelligence Agency, handed over Jallow and Gaye to the patrol team after their arrest.

Sanneh added that Gaye and Jallow were escorted in two vehicles, one of them driven by himself and headed for a bush in Foni where they were strangled to death by rope and buried in former president Yahya Jammeh’s garden.

Sanneh also confirmed his involvement in the tortures of security detainees at the NIA including Lt. Colonel Sarjo Jarju (Hitler) and captain Abdoulie Jobe for their alleged links to the December 30th foiled coup led by a former state guard commander Lamin Sanneh.

He also participated in the arrest of Colonel Ndure Cham at his hideout near Farafenni and taken to the NIA in Tanji before his execution, but denied torturing imams Ba Kawsu Fofana and Baba Leigh.

Both were among the initial 10 suspected Junglers arrested after the ousting of Jammeh but were released after investigators found their involvement to be minimal.

They both gave accounts of their presence and passive participation in some of the killings but maintained that they were some how isolated by the main junglers. Sittings continue this morning.