GAMBIA MUST WIN OR KILL HOPES OF AFCON APPEARANCE

Coach Tom Saintfiet and his Scorpions have no two ways at this stage about their ambition to qualify to the African Cup of Nations.

They have to win tonight and level Gabon on points and comfortably wait for the remaining two matches, one at home to Angola and the other away to DR Congo.

The draw between those two countries in the group on Saturday is the perfect scenario Gambia could get at this stage.

DR Congo is now at 3 points and Angola 1 point. The job at hand tonight is to beat the visitors at all cost and level them at 7 points. With the first two finishers in the group guaranteed a place in Cameroon 2022, The Gambia would be better placed to gun for at least second place in the group with a win tonight.

However, a defeat or draw for the Scorpions could make qualification almost impossible because Gabon will consolidate its grip of the group while Angola or DR Congo would be buoyed to gun for the second available spot with much ease and confidence especially if any of them wins on Tuesday.

Having lost to Gabon on Thursday, Scorpion’s coach Tom Saintfiet said now his target is to win, even with a one –nil score line, to be on top of Gabon.

He announced that he has invited Modou Barrow, Ngine Faye Njie and Kalipha Manneh who were expected to join the camp since Saturday to beef up the Scorpions capacity. “These are good players and I have also brought in Hamidou Bojang, Bun Sanneh and Ebrima Sidibeh and maybe one of them will be included in the final list. Mid fielder Dawda Ngum has accumulated two yellow cards while Ebrima Colley too is ruled out due to injury,” he said

Saintfiet promised to display an improved system while further expressing his satisfaction on the team’s comportment and preparedness ahead of return leg on Monday.

Again, as it in the first match in Gabon there will be no spectators and the GFF Events Management committee has appealed to the public to stay away and follow the various TV and Internet platforms for live feeds or updates from the Stadium.

The match will kick off at 17,00hr and would be live on GTRS. 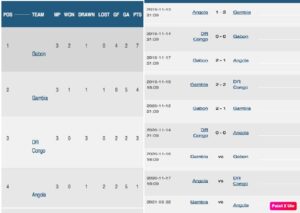