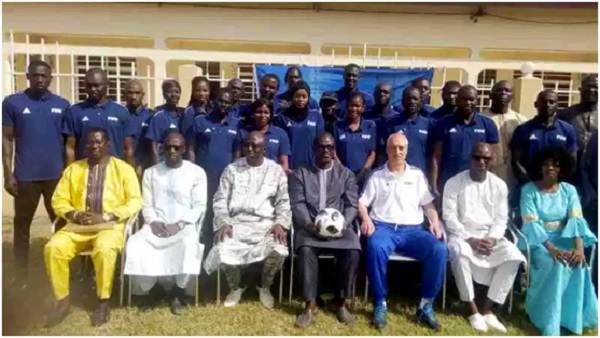 The Gambia Football Federation (GFF) on Friday began a four-day FIFA/Olympic Solidarity Coaching Course for 20 participants drawn from first and second division clubs in the male and female categories at the Football Hotel in Old Yundum. The programme, jointly organised by The Gambia National Olympic Committee (GN0C), will run through from 15 to 19 March, 2019.

Lamin Kaba Bajo, the president of the GFF, in delivering his opening remarks, described capacity building as key to the development agenda of his committee, noting that coaches are very important in football because they implement the laws of the game. “Referees enforce the laws of the game but it is the coaches who implement the laws in the field of play by giving the right instructions to their players,” he emphasised.

Mr Bajo, who doubles as the second vice President of the GNOC, said as a board member of the National Olympic Committee (NOC), he will continue to dig deep for more opportunities for football and its stakeholders, noting that later this year there will be B and C Licence courses for coaches. Therefore, he enjoined the participants to take the course seriously and participate in all the sessions. “Sports is participatory so I encourage all of you to participate and take this four-day training very seriously and everything learnt here should be implemented in your various teams,” he said.

Other speakers during the opening ceremony included the secretary general of the GNOC, Abdoulie Jallow, the GFF technical director, Sang Ndong and course director Serguei Aleinikov. They all emphasised the importance of the course. The ceremony was chaired by Lamin Jassey, the general secretary of the GFF.