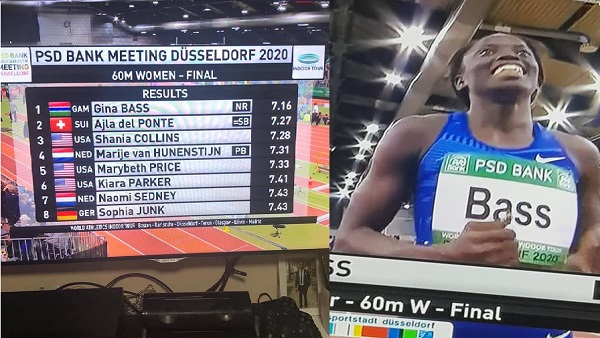 From Mondeville in France, where she took first in her first indoor race, Gambian sprinter Gina Bass moved to Düsseldorf, in Germany to win 60m women final at the IAAF World Athletics tour 2020.The IAAF World Athletics Tour is an annual global circuit of one day track and field competitions organized by the International Association of Athletics Federations (IAAF).

Gina who is already qualified to the 2020 Olympic Games in Japan is Africa’s fastest in 200m.
The Gambian’s spectacular performance has attracted widespread commendation around the country and beyond. Many Gambians took to the internet predicting that the Gambia’s medal hope in this summer can never be better with this spending performance of Gina Bass.