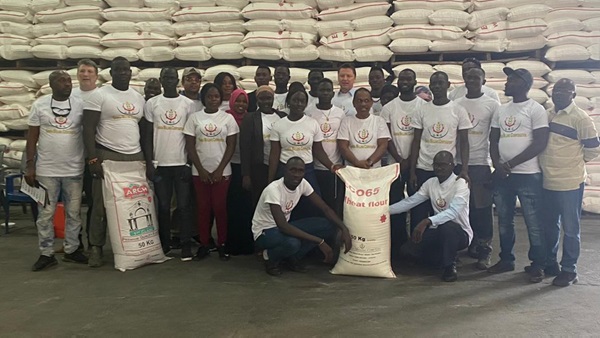 Gambia Milling Corporation (GMC) will this year produce and sell at least a million bags of flour, its managing director, Christophe Brady, told The Standard.
Bardy was speaking on the sidelines of a New Year party organised by GMC.

“Let’s go together and reach our one million bags of flour target. And as soon as we get it, within the next 12 months, GMC will give each of you staff a pay rise,” he promised.
The Corporation started operations in 2013 to make The Gambia’s manufacturing industry prosper.

Giving a highlight of the past year, Brady said the road has been a rather bumpy one with some highs and lows amid heavy losses for the corporation.
“…Despite the losses in tens of millions of dalasi, the board of directors have always believed in our milling activity in The Gambia; they have always believed in you, the employees,” he noted.
Brady then praised the government for encouraging industry by setting a strong frame for flour imports.

“Thanks to this decision, GMC has been able to partner with one strong distributor giving us the opportunity to run this mill at a better rate now than during the previous years. Our objective for 2020 is to produce and sell 1 one million flour bags.”

Amat Cham, finance officer of GMC, said: “We want to take this opportunity to assure Mr Brady and his management that they have set a standard in helping their employees. On that note, we the staff of GMC will continue to work hard.”