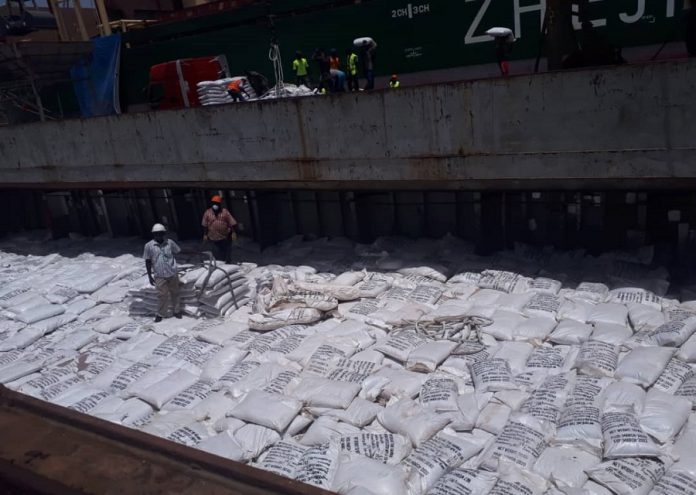 The Gambia Government has purchased 11,000 metric tons of fertiliser to be subsidised to farmers for the coming rainy season.

A cargo ship carrying the first shipment of 2000 tons arrived at the Banjul port yesterday.
It was received by officials led by the Minister of Agriculture Amie Fabureh, who said the fertiliser would be sold to farmers at subsidised rates which will not exceed D750 a bag.
She said the arrival of the first consignment demonstrates government’s commitment towards promoting agricultural sector and the farming community. Fabureh said based on the request of the farming community, the fertiliser will cover country wide.

She however warned against any injudicious use of the fertiliser and added that there would be strict measures on the ground to ensure it does not fall into the wrong hands. “Let us not allow our fertiliser to go out because that has affected us last year but this time round we are going to be very strict.The 11, 000 metric tons will cover the entire country and there will be measures to ensure our fertiliser does not go out.”

The managing director of the National Food Processing and Marketing Corporation, Muhammed Njie, said the shipment is a fulfillment of President Barrow’s call for the farming community to be supplied with fertiliser before the commencement of the rainy season.
Njie added that additional consignments of NPK and Urea brands of fertilisers are expected to arrive in the country in the next two weeks.

He assured of his corporation’s commitment to provide necessary support to farmers to increase food production and agricultural efficiency in The Gambia.
The permanent secretary, Ministry of Agriculture Momodou Mbaye Jabang, said: “This development will instill confidence in the farming community and will also help to boost production and productivity of farmers.”