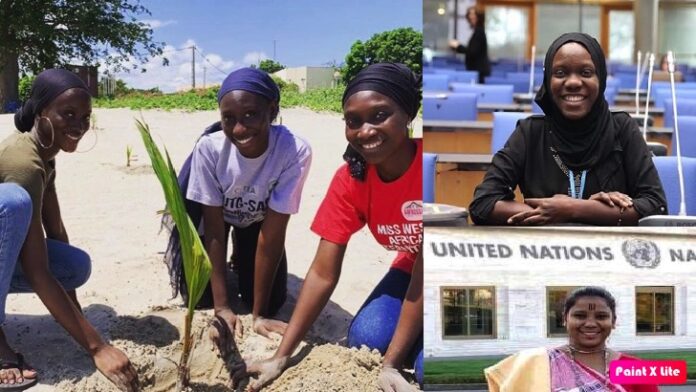 In July 2020, UN Secretary-General António Guterres announced the seven members of the new Youth Advisory Council on Climate Change. In doing so, Guterres recognized the necessity of input and counsel from international youth leaders in addressing the 17 sustainable development goals related to the climate action plan:

17. Partnerships for the goals.

Several if not most of these goals intersect with environmental sustainability and climate change factors. It is not only that “our children will inherit the Earth,” but in this very moment they are experiencing the legacy of their inheritance in ways that must be addressed immediately. Children as young as seven and eight years old are speaking out about climate change, planting trees, and modeling changes for our daily lives that individuals as well as governments would do well to follow to support a healthy near-term future for all.

We can highlight several members of the UN Youth Advisory Council as well as other youth activists from Asia and Africa who may be not be widely known but are making impacts nonetheless in their communities. One of the new members, Archana Soreng, belongs to the indigenous Khadia tribe from Sundergarh District in Odisha, India. Soreng is a research officer at Vasundhara Odisha as well as a climate leader. She works to preserve the traditional knowledge and cultural practices of indigenous communities like her own, and is particularly inspired by her father and grandfather. In her own words, she feels that “to build a better post-COVID world, it is important that indigenous communities are made stakeholders of the climate action strategies that will impact them most of all.”

Soreng also shares: “Land and forest are critical to an indigenous person’s identity. My clan name, Soreng, means a rock. Similarly, Kerketta refers to a bird.” Soreng speaks her native Kharia dialect. Indigenous youth from a wide variety of countries can eloquently speak to their ancestral connection to lands, waters, and animal species in ways most pertinent to the dire issues at hand. They are perhaps the most qualified—regardless of age—to advise, litigate, and legislate as spokespeople for their villages and tribes, as well as their threatened ways of life and livelihoods.

Climate activist and speaker Vanessa Nakate has been researching and educating herself for years on environmental and political issues. Having noticed crop failures, record heat waves, deforestation, and more recently plagues of locusts in East Africa, where she lives, Nakate felt she could not stand by without educating herself and speaking out. As part of the Fridays for Future school strikes and now with the Ugandan Rise Up movements, Nakate is a frontrunner in the international youth movement for climate activism.

Nakate uses her influence, including social media, to highlight fellow climate activists when they protest. If they are arrested, she spotlights their situation to create pressure for their release. This is a technique used by many indigenous or marginalized groups around the world—including those at Standing Rock in the US—to ensure that activists do not simply disappear into the system, or worse. Nakate attended the world economic forum at Davos, Switzerland, in 2020, alongside Greta Thunberg and others, but she was blatantly cropped out of a group photograph by the Associated Press. This was obvious racism, which intersects regularly with climate activism and subsequent reporting.

Arshak Makichyan is a passionate and outspoken Armenian-born Russian climate activist who has been engaged in continuous solo striking in Moscow, despite being arrested and harassed. He speaks passionately about climate activism, pointing bluntly to the grave problems of burning rain forests, extensive hunger, rising sea levels, and temperatures that will affect the children of today and tomorrow. In contrast to his solo strikes and being antagonized by the Russian police, Makichyan is warmly welcomed on multiple panels and councils as an important voice for Russian youth to express their anger and fears about climate change. He has spent more than 85 weeks striking by himself, yet says he is not afraid for himself but for the future of boys and girls who deserve a secure life on this planet.

Ou Hongyi is an 18-year-old climate striker in Guilin, China, who is also going it alone, as Chinese culture and certainly the Chinese government do not support freedom of speech nor public demonstrations. Heavily concerned about pollution, emissions, flooding, and other climate-related emergencies in China, Hongyi has even gone against the wishes of her parents, who are university professors, to join in solidarity with other international climate strikers. Hongyi was very influenced by Al Gore’s 2006 film An Inconvenient Truth and since watching it at age 16 has demonstrated many times about the climate emergency. Influenced by a strong dream she had about a fish, she also became vegetarian.

In 2019, Hongyi was detained by police for questioning after demonstrating for six consecutive days. She describes her resistance as a lonely spiritual exercise and shies away from directly criticizing the government. Criticism is neither her style nor something that is tolerated in China. While holding solo strikes in China is a lonesome path, Hongyi is connected to her counterparts throughout Asia and the world through social media and publicity. She inspires many other young seekers and protesters, undoubtedly, especially in Asia.

Historically, African nations have faced ongoing challenges such as war, violence, poverty, disease, and the struggle over natural resources both within and from outside their countries. Today, these issues only grow worse with climate change disasters such as rising sea levels, impacts on farming, and the subsequent effects on disease and health. There’s an intersection of these issues with gender-based violence and with the COVID-19 pandemic, which has had an even heavier toll on women and children.

Fatou Lamin Jeng is a youth leader and educator on these intersections of climate and gender issues. As a member of Clean Earth Gambia, as well as a speaker at UNFPA Youth Day International in the summer of 2020, Jeng brings critical conversations to the forefront:

Fatou Jeng highlighted that women play a critical role in the National COVID-19 response because they form a critical mass of frontline health workers, such as nurses, midwives, doctors, auxiliary staff in health facilities, as well as provide unpaid care work in households, including tending to sick family members. . . . Fatou went further to create a nexus between the impact of COVID19 vis-à-vis the projected increase in incidences of Gender-Based Violence, highlighting that stay-at-home measures resulting from the pandemic means more women and girls are forced to spend more time with abusers they live [with], thus exposing them to abuse.

Jeng is an inspiration and, as she posted on Facebook: “I am honored to receive an award by the Young Entrepreneurs International Summit as one of 25 Emerging African Young Persons of The Year for the work we do in our communities.”

Kisha Erah Muaña is a passionate leader for climate justice in the Philippines, where a multitude of problems such as global warming and therefore sea-level rise, soil erosion, water pollution, and their intersection with poverty, gang activity, and violence all vie for attention. Besides these, deforestation, superstorms, and earthquakes affect the Philippines intensely. As a youth spokesperson for the Cebu region, Muaña said she “felt happy to represent the country in a big event” to voice her views on climate emergencies. “In my own country, there is a little support. I am happy about COP because it allows the youth’s voices to be heard.” She serves as coordinator of the Youth Strike for Climate Philippines, connected with Greta Thunberg’s group. Muaña’s group “Step Philippines” is a non-profit youth organization made up of volunteers, young leaders, researchers, aspiring environmentalists, and conservationists. The group’s advocacy includes ocean conservation, citizen science, and climate action.

All of these youth leaders, and many more like them, offer us an imperative as well as inspiration to act now in combating climate change to save this planet for the future of all who live here: all peoples, races, species, and countries. We would be wise to rely on the counsel of indigenous and marginalized peoples who know firsthand the consequences of inaction and irresponsibility. As Archana Soreng remarked: “Our ancestors have been protecting the forest and nature over the ages through their traditional knowledge and practices. Now it is on us to be the frontrunners in combating the climate crisis.”