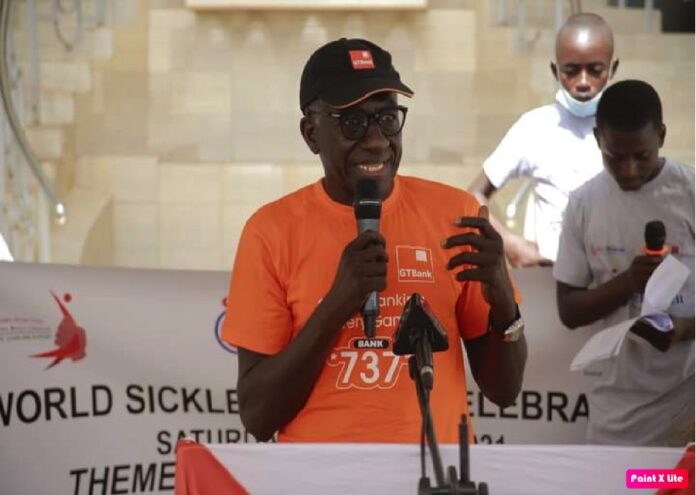 GTBank Gambia Limited Head Office was the venue for the commemoration of the International Sickle Cell Disease Day held on Saturday June 19.

June 19th was officially designated by the United Nations as World Sickle Cell Awareness Day with the objective of increasing public knowledge and understanding of sickle cell disease, and the challenges experienced by patients, their families and caregivers. Saturday’s event with the theme “Knowledge is Power” was organised by The Gambia Sickle Cell Disease Association and bank-rolled by GTBank Gambia. Event participants marched from Westfield to the GTBank headquarters.

Speaking on the occasion, the Chairman of GTBank Board of Directors Mr. Sola Mahoney said it was an honor for the Bank to associate with The Gambia Sickle Cell Disease Association in such a “valuable and worthy venture”. Mr. Mahoney reiterated the Bank’s resolve to complement national and community initiatives that are aimed at improving the lives and livelihoods of Gambians. He pledged his personal support to the association.

Alieu Badara W. Sambou, the president of The Gambia Sickle Cell Disease Association said everything their association does was aimed at improving the quality of life and empower individuals and families affected by sickle cell disease. Mr. Sambou said his association believed that through education, “we can move towards a world free of health, economic and social disparities caused by sickle cell disease.”

The Managing Director of the GTBank Gambia Limited Abolaji Isiaka Yusuff, said that supporting the event was in line with the bank’s Corporate Social Responsibility.  He encouraged people who do not yet know their genotype to go to health facilities and test, noting that this could help in controlling the spread of the disease. He also encouraged people living with sickle cell also called Sickle Cell Warriors to remain positive about their conditions.

The Director of health communications Mr. Momodou Njie said “government was committed to providing quality health care delivery to all people”. He assured sickle warriors that welfare was equally important to the ministry of health and efforts are being made to ensure warriors are adequately attended to at health facilities.