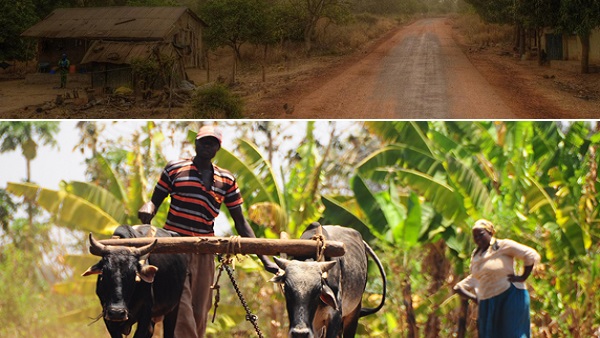 A staggering number of young Gambians have lost their lives trying to escape to Europe. UN Environment is implementing the largest natural resource development project in the history of the country to make their lives better back home.
For Alagie Camara, using his dwindling savings to leave The Gambia for Europe seemed the best option after the government closed the border with Senegal in 2015, and his vegetable import business that brought in US$50 a month collapsed.

But after surviving the perilous journey across deserts to reach Libya, “the back way” to Europe, he was captured and jailed alongside many other Gambians, stripped of everything they owned, abused and denied clean water, toilets and food.
After a month of hearing the many stories of countrymen being extorted and killed in Libya, drowning in the Mediterranean or becoming beggars on the streets of Europe, a weakened Camara and 140 other Gambians flew home, vowing to start a farming business on home soil.

“We go to Senegal to get vegetables—why don’t we try in this country? We can encourage people to grow and stay here,” said Camara, who set up the Association of Returnees from the Back Way.
The Gambia is one of the world’s smallest nations, with a population of under 2 million, yet so many Gambians have left that the country ranks as one of the world’s top six nations for migration via Libya and the Mediterranean.

As a sliver of land with a river running through it to the west African coast, The Gambia is highly susceptible to climate change, and its people very vulnerable after decades of dictatorial rule by President Yaya Jammeh, who was ousted in 2016.
Increasingly frequent and severe floods and droughts have caused erosion and damaged agricultural lands, while rising temperatures, erratic rainfall and increasing deforestation and poor farming practices have dried up or washed away soils, leading to degradation and desertification.

“In many of these rural areas, the environment and natural resource conditions are one of the driving reasons for migration,” said Alagie Manjang, deputy permanent secretary at the Ministry of Environment, Climate Change and Natural Resources.
The rural exodus of largely young people means that 53.5 per cent of Gambians now live around the capital Banjul, where a lack of opportunities drives many young people to set their sights further afield, said Lamin Dibba, The Gambia’s Minister of Environment, Climate Change and Natural Resources.
“Most of them think that Europe is the solution, so they leave to look for greener pastures abroad,” he said.

Bubu Jallow, a meteorologist and one of The Gambia’s leading climate change negotiators, said that a 30 per cent reduction in rainfall over the past 50 years has caused people to abandon their fields.
“This influx from the rural to the urban has been happening since the 1970s, because the rains in this country really failed after 1968,” he said.
Fatou Jammeh Touray is Governor of The Gambia’s Upper River Region, where there has been a massive exodus of youth, and many losses.
“So many young people have died,” she said, recalling meeting one family that lost seven sons to boats sinking in the Mediterranean in 2016.

Touray and other politicians are keen to dispel the myths spread through social media that Europe, a short hop across the “river”, is a poor man’s paradise.
Camara’s Association of Returnees from the Back Way is looking to stop young people from leaving The Gambia and helping those who return to go back to farming by getting land in the most hard-hit provinces. The Association has already managed to secure some areas of degraded land by approaching village chiefs, and hopes that young people will be given more opportunities as the government tries to build a green economy.
Dibba wants to create 25,000 green jobs for young people in their communities to stem migration and stop The Gambia from becoming even more dependent on importing food, as villages empty of young people “and they are left with only old people who don’t have the strength to till the soil”.

He has high hopes of turning the tide against migration, rural poverty and the country’s food insecurity with a US$25.5 million large-scale Ecosystems-based Adaptation project.
“This project is the single largest natural resource development project ever launched in the history of the development of this country,” he announced at the launch of the project in January 2018 in Banjul.

The Ecosystems-based Adaptation project will build climate resilience in four regions by rehabilitating degraded farmland, savannahs and forests with native species, and developing a sustainable, natural resource-based economy managed by local communities.
“The project will rehabilitate up to 10,000 hectares of degraded forest and wildlife parks through reforestation, enrichment planting, conservation of rare or endangered species as well as the restoration of 3,000 hectares of abandoned and marginal agricultural lands,” said Dibba.

UN Environment will implement the project, largely funded by the Green Climate Fund, over the next six years with the aim of helping at least 11,500 households directly and 46,500 indirectly, of which half will be women, across four target regions.
“We all left this country to look for greener pastures and we’ve returned back to look for it here,” said Camara.

“We have to believe in ourselves and say that we are Africans, not Europeans, and people there might be further ahead than us here in The Gambia, but as youths we need to encourage Gambians so that they can stay and do well here.”