IN THE DOCK HOW FAR WILL MATTAR’S SCORPIONS GO?

Mattar Mboge is on mission. He is seeking to bring glory from his first tournament assignment since the youth team was handed to him to guide.
Though he said his focus is to get ready for the African youth championship qualifiers, he equally takes the eight- nation Wafu championship seriously as a launch pad to test his mettle on the bigger stage.

And he is not only one in search for identity. His men too are. Having watched the Girls played heroics against Burkina, the boys know the stage his higher for all national teams now. They must fight for glory or be condemned as no hoppers.

So when proceedings start for the Gambia this evening, it will be all-out assault on Guinea to fetch the first three points going on to meet Senegal on Friday before finishing the group with Mali on Sunday. This evenings match kicks off at 6 pm.

Meanwhile Cape Verde failed to show up in Monrovia citing logistical bottlenecks. Cape Verde Junior team were earlier scheduled to play hosts Liberia in the opening game of the tournament on Tuesday. 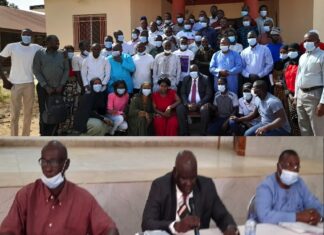 March 5, 2021
Deputy Executive Director Director Administration Senior staff, Regional Coordinators and All Staff The press  Ladies and Gentle Let me begin by welcoming you all to this critically important Strategic...