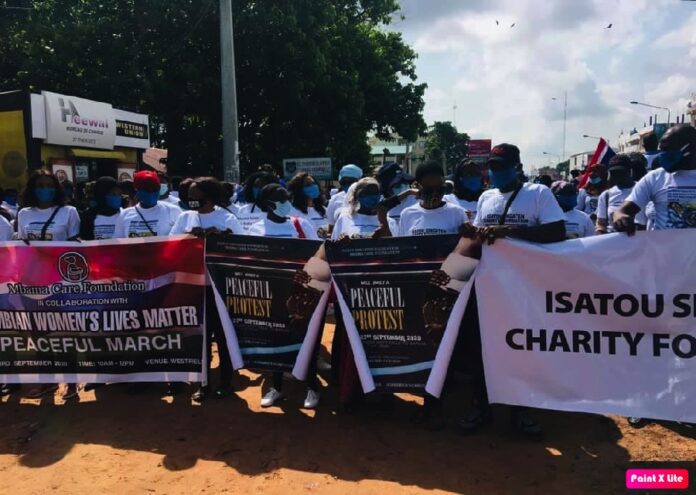 Gambian women and activists are calling on government for stronger measures to stem the rate of maternal deaths, This has led to a new wave of social media advocacy. Late last year, hundreds of Gambian women used social media to start a Women Lives Matter movement to protest against what they consider as high maternal mortality.

On December 19th, 2020. Adama Darboe, 36, died at a government hospital, just five days after she gave birth to triplets. The babies are now being taken care of by their aunt who complains of receiving no support from the government. She said when Adama her sister in-law died even Social welfare didn’t respond to their support request.

“The beginning we have had support from individuals but now that has stopped, some people brought us milk, diapers and cash. The only people helping us now are women lives matter,” she said.

The many maternal deaths reporter on social media like that of Adama are what triggered the creation of Gambia’s Women Lives Matter to start a new wave of advocacy on maternal health issues.

Last September, the movement staged a massive protest on the streets of Westfield, Kairaba Avenue calling on government to take stronger measures in reducing maternal deaths. A member of the movement Aisha Sarjo said last year they started this movement because many young mothers were dying and their advocacy is beyond social media.

“”Sometimes we received calls midnight to help women in hospitals with blood donors, and in most cases, we give financial support to victim’s families,” she said.

She also said most families complain of negligence of doctors resulting to maternal deaths.

However, Gambia’s minister of health Dr. Ahmadou Lamin Samateh said his ministry is not aware of such complaints but he will look into them.

A week after the women’s lives matter protest, the mothers and midwives’ association held a similar protest but asking for motivation in their work for effective service delivery to reduce maternal deaths. Basiru Camara, a midwife, acknowledges that midwives need to be paid better by the government and also organise more trainings.

“The government should try to look at ways of motivating the midwives for them to stay so we can have more skillful midwives, in our communities and health facilities, retaining of midwives remains a challenge,” he said.

Though the rate of maternal mortality from 2013 to 2019 has decreased to 36 percent according to a national demographic survey, the many maternal deaths that have been reported on social media in recent months have sparked public anger and put the issue at the top of the political discourse. Minister Samateh said the government is aware of the public concern and that his ministry is doing what it can in ensuring that every pregnancy is delivered safely.

“Now there is more visibility, there is social media, there is the internet if one woman dies the people post it on the net and then if unfortunately, it happens again after sometime it is posted on the internet and people will say oh is on the rise no, it is important for us to tell the people that maternal mortality in the Gambia is one of the lowest in Africa,” said minister Samateh.

According to the UN children’s fund, Gambia maternal mortality statistics are considered very high—for every 10,000 births, 597 women died on average in 2019.

Meanwhile, minister Samateh said the government is trying to stem the maternal mortality rate by hosting series of community outreach program especially in the rural areas to create awareness on maternal health issues.

According to UNFPA country representative Kunle Adeniyi, the new wave of social media advocacy has pushed policy makers to respond to the needs of the Gambian people. He said more women were dying in the Gambia due to maternal health issues in 2005, there was no noise about it but now because of the opportunity social media brings, gives visibility to issue.

The social media advocacy is making Gambians aware of high maternal deaths, now women and activists are demanding better for themselves and their children.

According to the 2019-2020 preliminary report of the demographic and healthy survey by the Gambia Bureau of Statistics, for every thousand births in the Gambia, about three women die during pregnancy or within two months of the end of pregnancy.