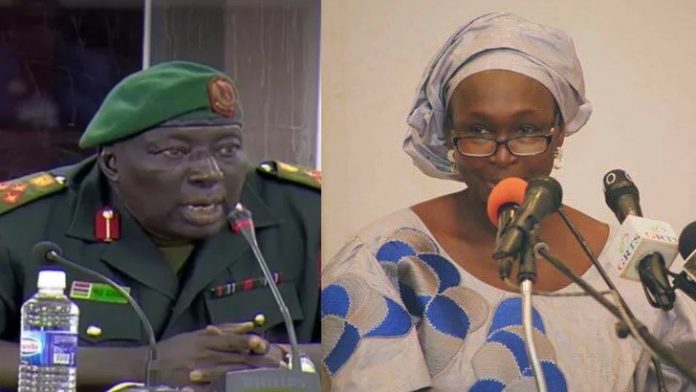 It is with deep concern that none other than the Director of Press and Public Relations Amie Bojang Sissoho would host a television program herself where the guests are heads of armed and security forces of the country with the sole purpose of threatening citizens, undermining democracy and weakening good governance in the Gambia.

In the first place nowhere in the world would the spokesperson of the President host a prime-time television show on prevailing national issues.

Hence it beats one’s imagination that the Press Secretary Amie Bojang Sissoho would have no better idea or useful activity to do other than to engage herself in such a misplaced venture!
I hope she will discontinue her so-called ‘National Dialogue’ otherwise GRTS must stop her immediately so that the proper personnel of the national television will carry out such a duty as media professionals.

What Mrs. Bojang Sissoho and the armed and security chiefs must understand is that the Gambia is a democratic republic in which the will of the people reign supreme.

All of them must realise that they derive their legitimacy and authority as Director of Pres and Public Relations and security chiefs from the people of the Gambia. Hence, they cannot and must not seek to intimidate sovereign citizens through such programs.

Of the greatest concern to me are the statements of the intelligence chief Ousman Sowe as well as the army general Mamat Cham. By seeking to hide behind drugs and the need for peace, these top security officers had the audacity to threaten the democratic rights and duties of Gambians as if they are the kings of the Gambia.

To attempt to link citizens right to protest and drug cartels and drug users is not only irresponsible but highly disappointing.

Who told DG Sowe that protesters in December will be high on drugs? That is not only a false statement but is utterly dishonest and disgraceful that he would even imagine much more utter such unintelligible words!
What these officers manifest is that they are serving the interests of their political masters against the Gambian Constitution and the Gambian People.

Therefore, it is utterly false when they claim that they are apolitical. Their statements indicate once again that these security chiefs have decided as usual to become stooges and defenders of a government against the people of the Gambia.

We hope Adama Barrow will not fool himself like Yaya Jammeh did by listening to sycophants and bootlickers in big warambas, colourful neckties and uniforms full of stripes only to derail himself.

Freedom of assembly or peaceful protest is a right and it is normal in a democracy. Protest is not a criminal activity and protesters are not criminals.

Therefore, to seek to demonise citizens who wish to express their political opinions by claiming that they will bring violence and criminality is indeed unbecoming of an intelligence officer.

DG Sowe is doing nothing other than seeking to scare citizens, to deny human rights and to undermine our democracy by equating political activity with drug trade and drug abuse.

Army general Cham must also realise that the Gambia does not belong to the military. It is not for General Cham to determine who should protest or not.

Let me put it to General Cham that citizens have a right to hold their government accountable. It is not the role of the military to defend a government against the people.

If that is his understanding of the role of the military in a democracy, then he is hugely miseducated.

General Cham must realise that a democratically elected government can be removed from office by many other means other than election. There are multiple places in the Gambia Constitution in which the National Assembly can remove the President out of office and those are democratic means without election.

Above all in any republic citizens have a right to rise up en-masse to demand the removal of a government or any elected public servant when those citizens feel that their government or the elected official has violated the constitution or human rights or injured the dignity of the country in any way or engaged in any misconduct or corruption including failing to fulfil promises or commitments.

This is why we had the Arab Spring where citizens overthrew by peaceful means elected presidents in Tunisia and Egypt for corruption, abuse of human rights and failing their promises.

We have seen similar uprising in Puerto Rico in July 2019 when the people removed State Governor by peaceful demonstrations for demonising opponents and victims of Hurricane Maria.

For uttering such threatening words, I hereby demand that the Commander-in-Chief Pres.

Adama Barrow to sack General Cham forthwith because he has made statements that are above and beyond his powers and the mandate of the Gambia Armed Forces.

The Gambia Armed Forces is NOT the legitimate authority to decide what to accept or not accept from Gambian citizens.

The Gambia Armed Forces must only submit to the civilian authority and execute only lawful orders.

When the Constitution says that the primary function of the military is to preserve and defend the sovereignty and territorial integrity of the Gambia it means that it is the self-determination of Gambians as a people and land that is being protected.

Our self-determination is our sovereignty which the same Constitution proclaims resides in the people of the Gambia. That sovereignty is the basis of our rights and duties as well as our will and voice hence the power of the people to form or dismantle their government.

Therefore, the Gambia Government is nothing but the opinion of citizens.

Political activities by citizens that are guaranteed by the Constitution are not a matter for the military or NIA or Police or NDLEA to decide. Rather they must keep their hands off to allow Gambian citizens to enjoy their constitutionally guaranteed rights.

Rather all armed and security services are mandated to promote and protect the fundamental rights and freedoms of Gambians.

Therefore, who is General Mamat Cham or NIA Director General Ousman Sowe to face Gambians to tell them what they can do or cannot do? What we expect our armed and security institutions to do is to protect the space to ensure all Gambians express their political opinions whether they chose to stay to home or climb a mango tree or swim in the River Gambia or occupy streets without violence and use of arms.

This unfortunate and disgraceful television show put up by Amie Bojang Sissoho is indeed a threat to our democracy and good governance. It indicates that indeed the Gambia’s security institutions and political leaders are not interested in security sector reforms and system change overall.

I want to advice Adama Barrow that this program is seeking to destroy him and the sooner he brings his Director of Press to book to stop this despicable program the better for him. Amie is overstepping her limits and she need to be told that she must confine herself only to the role of Director of Press and Public Relations at State House.

If she wants to be a journalist let her resign and apply for a job at GRTS or any other media house. Period.

To Mamat Cham and Bakary Gassama and Ousman Sowe, rest assured that the patriotic and conscious Gambians will not let you abuse our Constitution and sovereignty. The days of threats, abuse of power and misconduct by our security chiefs is over.

Rest assured you will be confronted by conscious citizens if you wish to derail this country once again.

Your statements highlight what Capt. Thomas Sankara said that a soldier without political education is a virtual criminal. This is what you have manifested on that poor show!

To Amie Bojang Sissoho, if you wish to convene a national dialogue on prevailing issues bring the President, NAMs, public servants, politicians, businesses and civil society to discuss the civil, political, social and economic issues and concerns in the country.

That is the way, and if you addressed these issues then we will have automatically solved the security situation positively. But assembling security chiefs only to threaten citizens is not dialogue.

By Philip Saine The former Minister of Interior has said the views of the Christian Council should be taken seriously with regard to the draft...
Read more
- Advertisment -