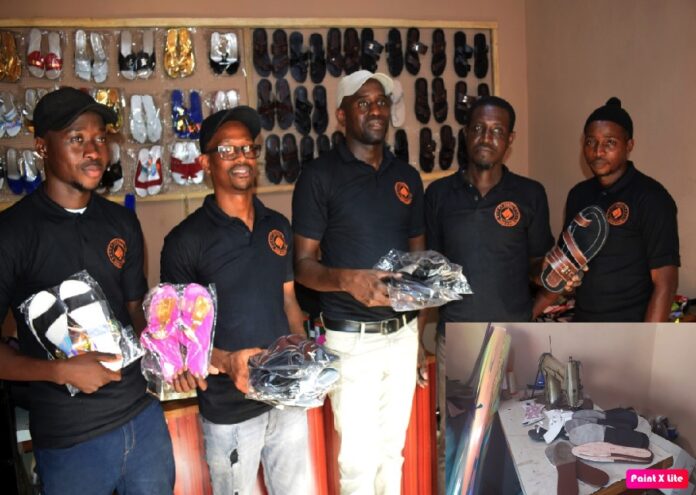 In this first Standard business column anchored by Awa Macalo, Ebrima Dem, the CEO of Stroll  Shoe Company, a first Gambian shoe factory, is our guest in this maiden edition.

Ebrima Dem, a native of Dongoroba, East Jarra in the Lower River Region has become the first Gambian to build a shoe factory in the country.

The 38-year-old is the founder and CEO of Stroll Shoe Company. The company specializes in designing and production of shoes.

The manufacturing company is venturing into both retail and wholesale, with the potential of supplying the entire country.

Dem, who graduated in 2008 from the University of The Gambia on fields of agriculture and biology, also holds Masters in environmental economics.

Dem said he gets his inspiration of establishing a shoe factory after a visit to Spain, Senegal, Côte D’Ivoire, Ghana, and Nigeria, countries which are doing tremendously well in shoe manufacturing.

The emerging entrepreneur said he sees the business as a potential seller in the country given the demand of the product.

“We believe that this is an unmet market in the Gambia. If you look at the environment and people, every sane person puts on a shoe -there is no one walking on the street barefooted. So due to that we see it as something that we can venture,”

“When I visited those countries I said to myself – if these countries are doing great in this business, why not the Gambia? That is how I started researching the area and from my findings, I noticed that in countries like Ethiopia and China, the shoe market is a very huge sector generating billions of dollars,” he said.

Dem said that is how he concluded that he should start his own factory in the West African country.

“My sole purpose was not only to make profit but to create a satisfying job opportunity for my fellow youth and even for the people with disabilities.”

He said the company has been in business for just two months and the business has since been going fine.

“The reaction we are getting from our clients is that the shoes are of good quality. But like I said, apart from making profit, we also are committed to significantly reduce the unemployment rate in the country,” he said.

He said most of those who buy from the company are young Gambian retailers. Dem said the company currently employs about twenty people but the plan is to employ hundreds when the business grows.

“We also have over twenty people that are part of our network – we give them shoes at a very reasonable price which they add their profits onto, sell and bring our share. In that way, we are giving them the chance to earn a living and saving them from going to other countries to buy these commodities,” he said.

He said though he cannot specifically say how much the company is contributing to the economy but they are significantly contributing.

“Our intention is to transform the company into an industry before next year. We are planning to purchase fifty extra machines and employ hundred people.”

This, he added, will expose the company to the international market.

“We are doing a lot of improvements to ensure that our customers stay with us. We are committed to continue giving them quality production that they would not find anywhere. This will discourage them from travelling to other countries to get shoes. We are also going to give them prices that are competitive and reasonable compared to the prices they pay to get in Senegal,” he said.

He said the company is aware that when they continue to produce quality productions, business men and women who venture into shoe business will stop traveling outside the country to get the products.

Asked about the reasonability of his company’s products, Dem said: “Our prices are very reasonable – the shoes they sell in the market for D450 – we can have them here for D200 and those who buy from us resell it for D350. That is very reasonable.”

He said the retailers who buy from the company get D100 profit for each pair of shoe they resold.

Commenting on the market availability, CEO Dem said the market is very huge and there are prospects.

“We are about 2.2 million people – so if all us get ourselves a pair of shoes then that will be huge. All we need now is visibility and support from our fellow Gambians,” he said.