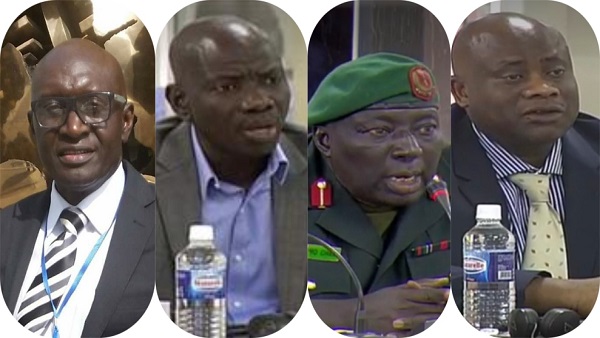 I watched with keen interest the statements of Mr Alagie Kanteh at the TRRC on Monday 14 January 2019 and that of Mr Aboubacarr Jeng the next day and I think the counsel missed certain opportunities to come up with validating questions about me and in particular about my trauma-induced “madness” at Mile 2 Prisons after the infamous night of 6 September 1994.

In fact, I almost at first thought that the counsel’s patient insistence to compel Mr Kanteh, to publicly say that “Samsudeen Sarr” was mad was hinged on the former’s personal curiosity to perhaps confirm the widely discussed and widely rumoured and widely accepted baloney that I was truly insane until I realised in the end that Mr Kanteh had indeed prepared a supporting written statement before taking the witness seat. It was evident that Mr Kanteh tried to avoid publicly calling it madness by throwing vague descriptions of the symptoms from “depression” to “withdrawal” and to “refusing to eat and talk”. But the counsel couldn’t accept any of that and kept on prompting him to say “madness” the way I believe he wrote it in his statement. At last, the counsel had no choice but to ask him to say the exact word: “So does that mean he [Samsudeen Sarr] was “mad”?” asked the counsel. And he replied. “Yes”.

I cringed with utter disappointment with a person I have always had special regard for. Why Mr Kanteh couldn’t sooner get to the point illustrated a lot about his insincerity or perhaps his battle with his conscience for not telling truth under oath. Like I said, I think he was one of the junior officers I had genuinely bonded with and was therefore aware of the consequence of undermining my faith in him for publicly fabricating that story.
I also believe that the protracted grilling from the counsel to just get hesitant Mr Kanteh to finally acknowledge what he wrote derailed his concentration to ask the right follow-up question that could have exposed his irrationality.

In his evasive explanation, he mentioned being so caring to me in my “mad” state by constantly counseling me with encouraging words that I had to write about it with special appreciation in my 2006 book Coup d’etat by the Gambia National Army.
If Mr Kanteh was counseling me in the state of mind he truly believed I was – total madness – I think it would have been fair to me and his believers to understand how I could have remembered his compassionate actions to write about it in my book published twelve years later? Certainly, I wrote a lot about Mr Kanteh’s humane actions towards me describing even the clothes he used to wear when counseling me.

So unless he says that he later explained the events to me in the way I detailed everything in my book, I see no reason why any reasonable person should accept his assertion of dealing with a mad man. The details are in my book available at Amazon bookstore. I had faked a survival tactic for all of us and later convincingly explained my actions to those I thought needed to know including Mr Kanteh.

Let me make a comparison here. What conclusion does one arrive at in Mr Amadou Suwareh’s testimony, laced with utter deception like that of Mr Aboubacarr Jeng’s, and how the former explained his farfetched activities at the Denton Bridge that literally contradicted everything testified by his senior Mr Ibrahima Chongan prompting the counsel to asking him how Mr Chongan couldn’t recall all of that? I think that was sarcasm aimed at telling an adult to stop lying.

Similarly therefore, I had expected the counsel to ask Mr Kanteh why Mr Sheriff Gomez the previous day couldn’t in his elaborate testimony remember any of what he explained about my madness. Sheriff, I was sure, could not, because he knew the facts.
With all frankness, I think there is no better answer to all these never-ending questions aimed at proving me insane than to find the report of the doctors at the RVH, who, after subjecting me through a comprehensive medical examination two months later, gave me a clean bill of health.

Dr Jones headed the team and submitted a report to the government. All of the detainees at Confinement No. 4 were aware of that fact but will never say it.
If that medical report had confirmed my insanity, I don’t think the government would have, a few months later, released and appointed me deputy commander of the GNA where I eventually become the army commander in 1997.

Anyway, before explaining everything about what exactly happened to me at Mile 2 Prisons, let me first point out some of the grey areas about issues mentioned so far.
I think the TRRC should have included senior military or police officers like Captain Momodou Kassama living in England, a fine former GNA officer and former aide-de-camp to President Jawara for verifying the false information being fed to the gullible by these witnesses from the Gambia security forces.

For instance, the theory presented by Jeng with a straight lying face on 15 January that during the coup he observed the GNA soldiers wearing civilian undershirts and underpants in preparation to discard their uniforms and blend with the civilian population in the event of a foreign military intervention was as false as the set of teeth he was wearing. The GNA soldiers despite their limited experience in fighting wars were even ready to fight the Americans if they had intervened with their amphibious tanks. And I bet that if the TRRC exercise is to continue for the next ten years with ten witnesses testifying everyday, not a single person will confirm that. Nobody ever heard about or saw that happen at all.

Yes, the Senegalese Armed Forces were certainly poised to intervene until -although he lied a lot about how the problem was resolved – Captain Mamat Cham and I went to talk to their ambassador, Mr Kebé at his residence at Cape Point, Bakau. The day after, the ambassador provided us with a telephone link between Chairman Jammeh and President Diouf that finally settled the confusion.

I was at the State House with Jeng up to the day I was arrested on 27 July 1994. For him to further say that apart from Yahya Jammeh, he was the only one who had had a functioning office there was at best an exaggeration and at worst one of his shameless fabrications. He either didn’t know or ignored the fact that I was the military staff officer and had my office within the premises for two years where I in fact wrote the maiden speech of the coup, or that he was as habitual just lying again.

No wonder most of his fellow police officers he said were moving around with him in those early days of the coup including Captain Khalifa Bajinka and Lieutenant Jarju (may their souls rest in peace) are dead. So he knows that he can freely fabricate stories with no chance for verification.
Jeng also said that he could confirm my insanity at Mile 2 Prisons because he used to give me food forgetting that Alagie Kanteh already said that I was depressed and refused to eat any food throughout my madness. I wish someone had asked him how Mr Kanteh couldn’t remember him giving me food.

As for Captain Mamat Cham, I think he exhibited nothing but clinical symptoms of early dementia. This guy couldn’t even remember that General Dada was in the country that day, and he kept on saying that he was with Colonel Owonobi who was in Nigeria with Colonel Guadebe to report the impasse between the two disagreeing Nigerian commanders. It was Colonel Akoji who was acting as commander. Cham did not also tell the truth about how the young officers, after planning the coup, invited him to join them and he initially accepted but later chickened out and started spreading the falsehood that he disagreed with them over the criteria of appointing their executive after succeeding. Though his real beef with Singhatey and Sabally was his treacherous activities of being heard telling other contacted captains that he will organise a counter-coup if “the boys” succeeded.

I knew all these things about him while we were in jail, thanks to the late Captain Ndure Cham (RIP) who told me what happened. I confronted him then and he admitted it. I mentioned all that in my book, swearing that if I had known I wouldn’t have spent a minute with him at the State House let alone working with him in those early critical days.
The man is a master conspirator and played a huge part in destroying the GNA. He further lied when he said that I asked him to write an apology letter to President Jammeh in order to be rehired after being released from prison. Nobody wanted to have anything to do with his treachery at that time especially in the army he helped to instigate the 1994 coup d’etat.

Why the Barrow government has now salvaged this discredited captain, discarded in the streets for 22 years and giving him the rank of a brigadier general with the appointment of GNA commander he doesn’t deserve epitomises the abuse of military ethics and standards. How can The Gambia conduct a fair and meaningful security reform with the likes of these square pegs in round holes accommodated?
Captain Cham’s testimony was brutally misleading, obliging me to set the records straight. Let him be informed that he will be hearing from me on everything we did together. I am not [….] like him who used to argue with the detainees about the existence of dinosaurs because they were not mentioned in the Holy Qur’an.

Samsudeen Sarr is a published author, former diplomat and commander of the Gambia National Army. He now runs a vehicle repairs services in Kotu.